The Golden Hamlet, Hypoplectrus gummigutta, is one of the most striking small fish of the Caribbean, and it also happens to be one of the most elusive. We have revered this fish for over twenty years and during that time we’ve only ever seen less than a handful of live aquarium specimens.

Our last encounter with the Golden Hamlet was in the home aquarium of Matt Wandell way back in 2013, that specimen became a permanent resident at the Steinhart aquarium and we haven’t seen another one since. The rarity of the golden hamlet is due in large part to hamlets not being particularly popular in the aquarium world, and compounded by its scarcity in the wild.

Interestingly, while the golden hamlet can be infrequently sighted throughout much of the Caribbean, it’s usually only disparate specimens sighted here and there which makes us wonder how they can breed and occur in isolated regions. Hypoplectrus gummigutta is hard to find in the greater Caribbean but there appears to be a localized abundance of the golden hamlet around the Mosquito Coast of Nicaragua although we don’t know of any collecting of ornamental fish for the aquarium hobby from this country.

We were incredibly fortunate to receive a well conditioned aquarium specimen as a gift from Takayuki Kamata, better known as the editor of Reef Builders Japan. The golden hamlet has been on our short list of ‘holy grail fish’ wish list for as long as we’ve known about it and it will join our indigo hamlet in the fish display tank in due time when it’s been thoroughly re-quarantined.

At the moment the golden hamlet is just shy of four inches long with the lovely blue edged black facial mask with a yellow body and bright yellow fins that are interrupted only by a dusky coloration towards the anterior region of the body. As the fish grows the body will become slightly taller, developing a kind of ‘shoulder’ above the gills and the dusky coloration will be completely replaced by a saturated yellow coloration which will only serve to highlight the beautiful facial markings of Hypoplectrus gummigutta. 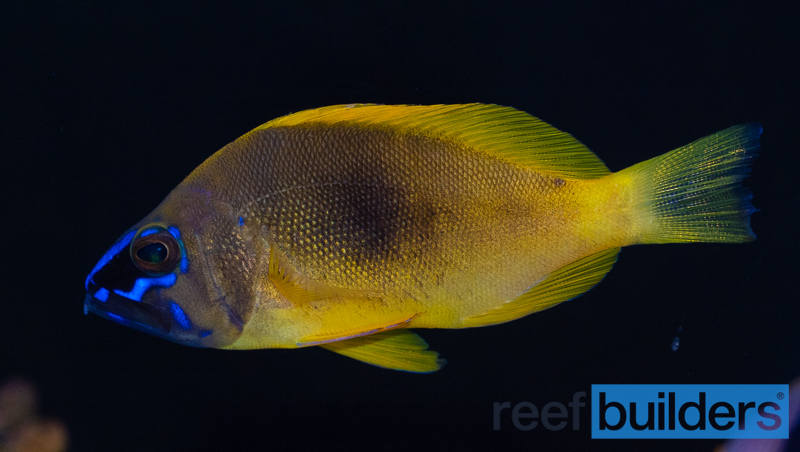