Cirrhilabrus chaliasi and C. aquamarinus are two newly described species of fairy wrasses but while the names might be new, the species themselves are actually well known to saltwater aquarists. We can’t hep but feel a sense of pride that not only are the new species described by Reef Builders veteran Tea Yi Kai but one of the new fairy wrasses is named after active contributor Vincent Chalias!

The two species in review belong to the Cirrhilabrus cyanopleura complex which should a gradient and a lot of overlap in their color patterns which has made it challenging to determine where one species ends and another begins. The biggest surprise of the new paper is the redescription of the fish once commonly known as C. solorensis, the red head fairy wrasse, with teh very aptly chosen new name of Cirrhilabrus aquamarinus. 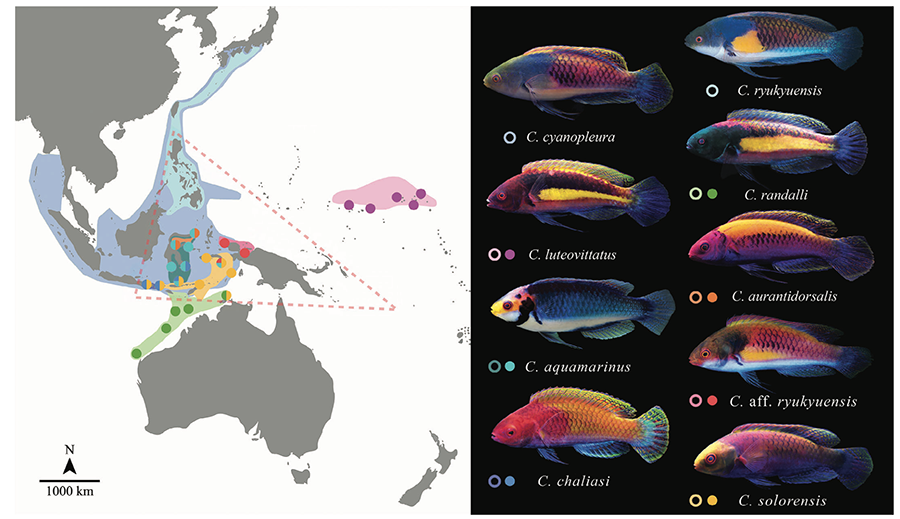 The nine species in the cyanopleura complex are mostly found in the heart of the Coral Triangle with the nominal Cirrhilabrus cyanopleura being the most widespread ranging as far as the Andaman Islands in the west and north to Japan with C. luteovittatus being the most isolated in the western Pacific Ocean but most of the others have much more limited ranges. Surely it will take some time for the hobby and general wrasse fanciers to get used to the new name of the red head fairy wrasse but the memorable designation of aquamarinus it should be much easier to recall the ‘aqua marine’ fairy wrasse.

Cirrhilabrus chaliasi is much less common in the aquarium hobby being a slightly greenish in color with a deep red head and a ventral area which ranges from white to blueish. We can’t imagine what Vincent must be feeling to have a fish he’s seen and photographed in the wild now bearing his name. The two new species designations bring some much needed clarity to the sprawling number of fairy wrasse species which now number somewhere around 62 but surely we will see more added to the group in the future. [Research Gate]