Kessil AP9X Vs. Neptune Sky – Comparing Spot and a Flat Lighting on the Euphyllia Reef

The Neptune Systems Sky LED and the Kessil AP9X are two reef aquarium light fixtures with similar power and an identical price but you can’t find two fixtures that are more different from each other in how they produce and emit light. Both lights have roughly 200 watts of power and each has a suggested retail price of $869 and they are equally well suited for illuminating a roughly 24 by 36 inch, 60 x 90 cm aquarium footprint which we just happen to have ready to go for evaluating both of these light fixtures.

The Euphyllia Reef is a nominal 75 gallon Innovative Marine Nuvo EXT 75 which has been running for two and a half years and is wall to wall packed with Euphyllia and related corals. We keep just abotu every species of Euphyllia, Fimbriapyllia and even the closely related Galaxea corals within this tank. Over that time some of our legacy decades-old branching hammer corals have been pruned, shared around and removed to make room for an increased diversity of branching hammer and various frogspawn corals.

Euphyllia and their relatives are some of the most adaptable to a wide range of lighting conditions so they are the perfect candidates for test polyps in this comparison between the spotlight and flat panel LED light form factor. One of the asides of this video is that this is the first time we’ve mounted a new light to our reef testing wall which we developed in order to more quickly and easily suspend lights with hanging cables without having to interfere with how the tight fitting screen mesh lids fit on the tanks, keeping all precious fish inside.

Before we dive into the pros and cons of each reef aquarium light form factor we want to emphasize that this is not a best or worst comparison because spotlights and diffused lights are apples and oranges and each will perform best under specific set of conditions with the Euphyllia Reef being a perfect middle ground for both types of fixtures to have a chance to shine. We would say that the biggest differences between the Kessil AP9X and the Neptune Systems Sky LED is primarily quantitative but we did take a ton of PAR measurements to inject a degree of qualitative dimension to the spotlight vs. panel light comparison. 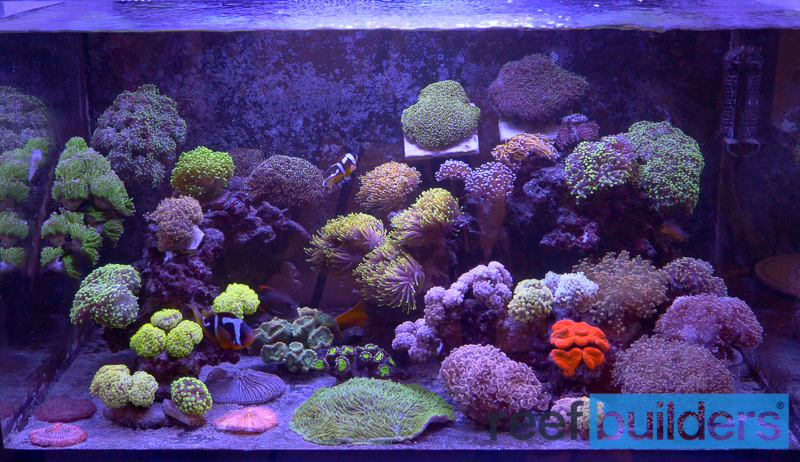 This three foot reef tank has been running the Kessil AP9X since its launch in the summer of 2020 and we’ve thoroughly enjoyed it over this tank full of Euphyllia over all that time. We love the color, we love the strong contrast, the super dramatic shimmer lines and the only limitation we experienced is struggling to reach the lighting intensities at the margins of the reef, closer to the walls of the tank. without either increasing the total intensity, or raising the light ever higher (which is now possible with the new mounting bar).

The PAR values we measured for the Kessil AP9X under our programmed spectrum were exactly in line with what we expected, ranging from a peak of 370 micro mols at the surface down to ~120 micro mols at the bottom sides with a nice even blanket of 200 to 250 micro mols across the middle part of the tank where most of the corals are located. What surprised us the most about taking these light intensity measurements is how little the total PAR increased when we set the AP9X to full power broad spectrum with most values increasing by only around 10-15%, no doubt owing to the Tuna Blue system which redistributes power to the LEDs which are actually being used. 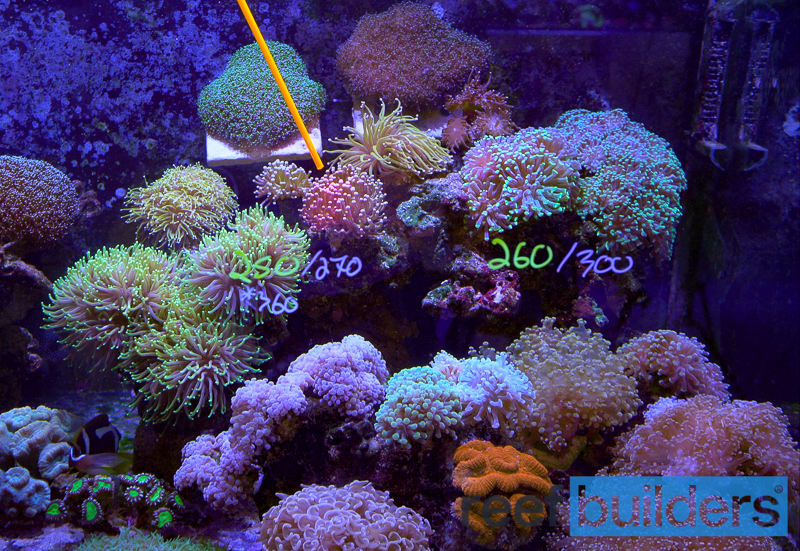 There’s been a lot of hype surrounding the first light from Neptune Systems and while we’d studied the specs and observed the light displayed at various aquarium shows, there’s no substitute for getting our hands on it, getting a good look at its guts with a thorough tear down, and now finally putting it over a tank of corals with a population that we know intimately well. As we mentioned more than once in the video, no matter what new light we install over a tank, our familiarity with our own reef creations always rejects even the slightest of changes.

That being said we were pleasantly surprised with how the Neptune SKSkyY slotted in with what we describe as ‘modern’ reef aquarium preferences even if the total absence of shimmer absolutely transformed the look of the tank. At full intensity the daylight spectrum of the Neptune Sky still introduced plenty of coloration and throttling back the white and accessory color channels a little bit brought the color balance well in line with what reefers expect their corals to look like. 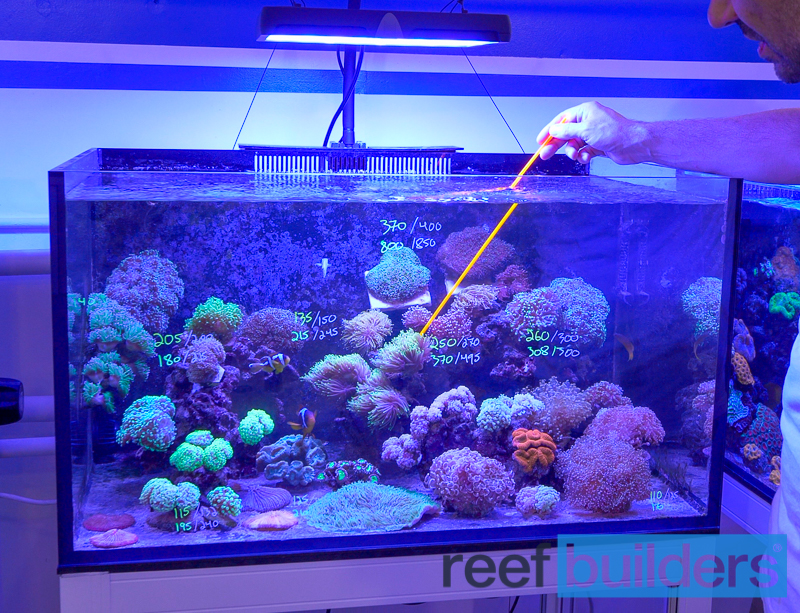 The light measurements painted an interesting picture of the overall light field from the Neptune Sky, with the many overlapping rays unsurprisingly pushing PAR values up to 800 micro mols at the surface and nearly doubling the total PAR on the bottom of the tank from 125 to to 210 micro mols in the center, and 125 5o 195 micromols on the side, which is precisely what you’d expect with this lighting format. However unlike the Tuna Blue system of the Kessil AP9X, switching between colorful and full spectrum intensity resulted in a 25% difference in PAR levels.

While we were pleasantly surprised at how much we gelled with the general colors of the Neptune Sky, our PAR measurements demonstrates that this light is not the magical completely uniform light fixture that the marketing makes it out to be. Sure there is a helluva lot less self shading by the corals, but the PAR varied from 245 micro mols in the back middle of the tank to almost double that at 495 micro mols in the geometric center of the aquarium, with a similar drop off at the side ends of the tank. 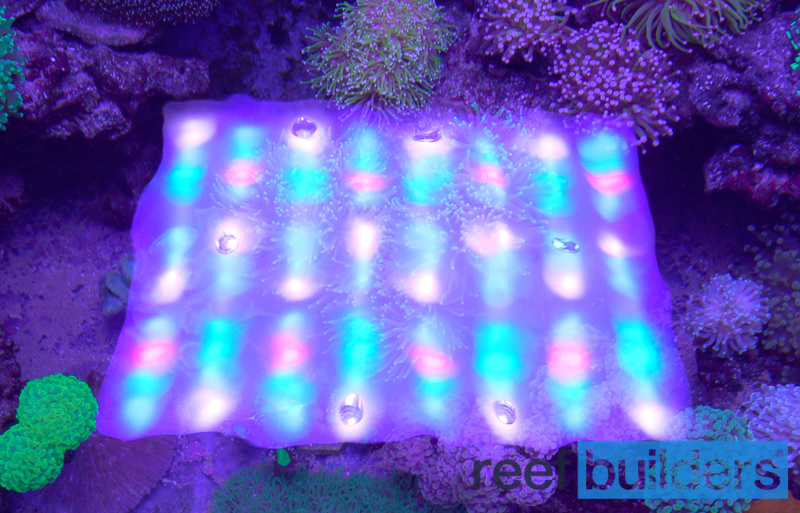 The Neptune Sky does an admirable job of spreading more light to the bottom ends of the tank and it throws light front to back very well if you don’t mind totally kissing shimmer lines goodbye. Furthermore, save for a little red spot in the Kessil there was no consequential difference in color mixing between the multichip-powered Kessil AP9X and the light-mixing diffuser of the Neptune Sky and you can’t really see any ‘disco ball’ effect with either type of light fixture.

It was very fun comparing spotlight ‘apples’ to flat light ‘oranges’ with the completely opposing lighting styles of the AP9X and the Neptune Sky and for sure both lighting types will make corals look great. There is a lot more flexibility in smaller and more numerous lights of lower power than one single large flat panel light like the Neptune Sky but for sure the choice of a spotlight versus a flat panel light is 100% up to personal preferences and reefers should have great success using either types of light fixture.