The Neptune Systems SKY LED light fixture has gotten a lot of attention this summer being the first reef aquarium light developed by the aquarium controller company. Now that Neptune Systems is officially a property of Bulk Reef Supply, a company with massive resources and an expansive media marketing machine, the hype around this light has certainly reached a fever pitch rarely seen in our hobby and industry.

We purchased a SKY LED to see what Neptune Systems could create, being the last major aquarium company to release a high performance LED aquarium light, and having the benefit of learning from all the other lights on the market. It’s no secret that the Neptune Systems team was heavily inspired by the Philips CoralCare LED fixture and this is supported by the wide footprint of the fixture and the patented light mixing chamber within, but let’s take a look and discover how Neptune Systems took this starting point and put their own touches on the SKY light. 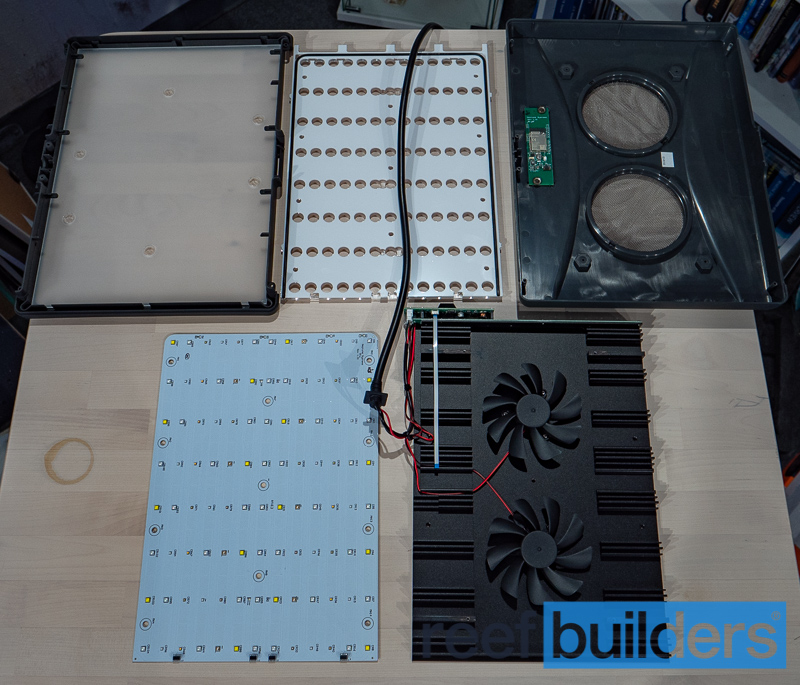 With so much hyperbolic messaging tied around this light you we couldn’t wait to take apart and see how it all works before putting it over one of our Studio tanks so in this article we’ll primarily be focusing on just the hardware. The box and packaging of the SKY LED itself is pretty decent but we certainly appreciated the quick setup sheet inside with all of the most useful information available at a glance, including suggested light placement over common aquarium dimensions, QR codes for quick access to the controlling app, and a visual guide to getting started with the light using just the color changing button.

By including a cloth bag to protect the SKY LED Neptune Systems definitely wants to project the sense of luxury but this first impression is immediately tempered by the surprisingly light weight of the fixture itself. The SKY LED is twice the size of a Radion XR30 but at only four pounds the SKY is half a pound lighter than the comparable price and power of the Ecotech Marine flagship light, which is out of step with every other actively cooled light fixture on the market.

Once we got over our initial surprise of the lightweight of the SKY LED we took a moment to examine the exterior of the fixture which is completely enveloped in a thin rubbery coating. This type of coating has been known to experience “rubber reversion”, becoming sticky over time but it is unclear whether the higher and more humid environment of this light running over an aquarium will speed up or slow down this process.

The Neptune SKY is a rare aquarium light fixture in the aquarium hobby using two fans to counterbalance the light weight heatsink, and it’s also the only light we know of that has hot air exhausting downwards towards the aquarium water surface. We’ve heard some reports of early adopters experiencing rising tank temperatures from this stream of hot air blowing at their aquarium water which is no doubt exacerbated by the need to mount this diffuser style light fixture very close to the aquarium to minimize light loss.

Speaking of the diffuser, like the CoralCare Gen2 the SKY LED has a number of clear lensed windows to introduce a small amount of shimmer to the aquarium which can be replaced with opaque versions (sold separately) but we struggled to remove these without a tool like a small pick, perhaps there’s a trick to it. One aspect of the diffuser that many reefers have commented on is how it’s completely loose within the fixture, simply resting on a retaining frame when the light is right side up – it’s probably ‘fine’ during normal operation but loose parts don’t exactly instill confidence.

Once we got the housing of the SKY LED apart it was time to really take in what makes this light work and upon removing the bottom assembly we could finally see the business end of the SKY LED’s lighting engine. As expected we saw Neptune Systems’ implementation of the patented Philips light mixing chamber which consists of a thick layer of clear acrylic on the front, a thin opaque white layer against the LED board and medium sized holes through both layers over each of the light emitting diodes.

One thing which still has us scratching our head is that there is a THREE-sided gasket between the LED board and the light mixing layer, so one side is completely exposed meanwhile every LED is completely uncovered due to the holes, so the only reasoning we can come up for this gasket is for spacing the LEDs and the mixing chamber at an ideal distance.

As for the LEDs themselves, we believe that the selection of LED colors is probably one of the biggest strengths of the Neptune SKY light. The reef aquarium hobby now collectively has a decade of experience using different LED colors to achieve an optimal spectrum for reef aquarium corals. Blue, Royal Blue, Violet and Ultraviolet are used in generous amounts, ‘nutritious’ PAR spectrum is provided primarily by a carefully distributed array of cool white LEDs meanwhile the typical red & green is replaced by phosphor coated (PC) amber and Cyan LEDs which introduces welcome warmth and extra color rendition of fish colors and coral pigments.

The only limitation to using the LED colors of the SKY light is that Neptune only saw fit to include a paltry  FOUR control channels which is more akin to low cost black box LEDs than even an average flagship LED light. Kessils have five channels, AquaIllumination Hydras have eight, the GHL Mitras have nine, Ecotech Marine Radions have ten, even the hand crafted Reefi has nine and the budget minded Jump L-165 has six color control channels – so for a control-focused company like Neptune Systems to only include four color channels appears misaligned with their ‘control freak’ messaging.

This design choice saves cost and makes it easier to to program but veteran LED reefers trying out the SKY will be stepping down to half as many color channels that they are used to. We would have preferred if Neptune Systems had paired the color channels in software as a default, and left open the option to manipulate each color channel separately for advanced users to dial in their preferred spectrum in granular detail.

Moving along to the back end of the light we have the electronics, cooling fans, and the aluminum heatsink which together drive, control and cool the LED board. No doubt the wide foot print of the LED placement necessitates less aggressive cooling than clustered diodes but we couldn’t help but be somewhat alarmed at the minimal amount of aluminum of the heatsink which is somewhat offset by having double the number of cooling fans.

Of greater concern inside the housing of the SKY LED is the complete absence of any kind of moisture barrier on the sensitive electronics. Some companies totally isolate the electronic components from the humid air flowing through for cooling, some use a protective conformal coating, others use both, but Neptune Systems didn’t use either of these tried and tested techniques for building long lasting aquarium electronics. 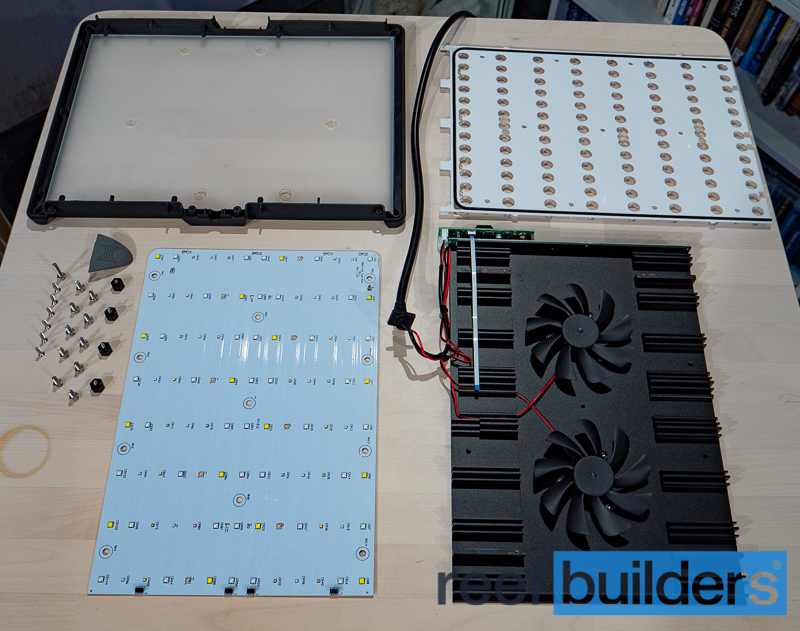 The small daughterboard containing the communications, memory battery and single programming button is right between the two fans and completely exposed! Water and moisture ingress is by far the single biggest cause of failure in ‘smart’ aquarium gear so unless we’ve completely missed something we have serious reservations about the durability of the SKY light, especially in more humid environments.

All scrutiny aside, we were very pleased that Neptune Systems allowed the SKY LED to be operated independently with modern wireless communications through the app, although you have to use the integrated AquaBus cable wired to your Apex controller to use it within the Fusion ecosystem. The setup of the SKY LED as a standalone light is one of the best out of the box experiences we’ve ever had – we didn’t have to refer to any manual, the quick start wizard of the Fusion app is slick, effortless, and we had direct control of the intensity and four color channels of the SKY LED within two minutes.

Wireless programming through the Fusion app is very fast and responsive and there is a wide number of templates, including the much lauded ‘photo mode’ to get users up and running very quickly. Now that we’ve thoroughly dissected, analyzed and reassembled the SKY light we’ll soon be placing it on a tank with the recommended 24 x 36″ dimensions so we can get a better feel for how this light actually functions over an established reef aquarium.

PSA: Make Sure to Inspect Your Magnets for Rust!