The Manaia Pygmy Pipehorse, Cylix tupareomanaia, is a brand new syngnathid from New Zealand that doesn’t just represent a new species, but is so unique that it warranted the creation of separate genus. This newly described pygmy pipehorse was discovered at Taitokerau Northland, New Zealand which is the only place where this cryptic species is currently known to occur.

This irresistibly cute little pipehorse is a beautiful pinkish red overall sometimes with boldly contrasting white patches of countershading to help it blend in with the calcareous algae, bryozoans, and macroalgae growth which is abundant in its habitat. While it may be small, the Manaia pygmy pipehorse is not as microscopic as some other species of pipehorse since it grows to the respectable size of 55 millimeters, or just a touch over two inches long. 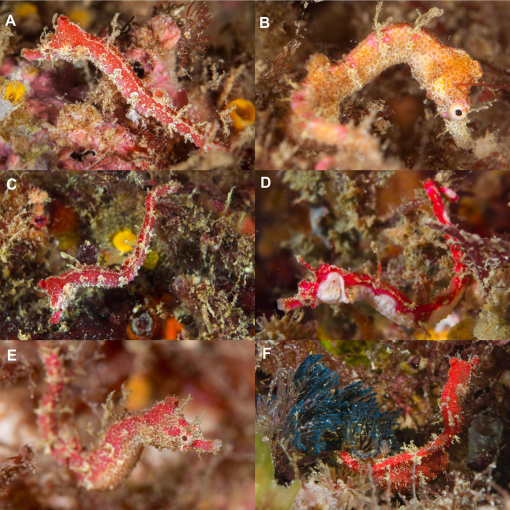 Cylix tupareomanaia is part of a large group of small temperate species of other pipehorse which are very well camouflaged, have tiny known range distributions, and are starting to become better documented but are still at risk of declines due to their limited ranges and small populations. What made taxonomists place the Manaia pygmy pipehorse in its own genus is a combination of features but the biggest difference is a cup-shaped crest on the head and some unusual cone shaped spines along the body.

The discovery of not just a new species but a whole new genus of pygmy pipehorse was a great surprise to researchers who had performed numerous surveys of New Zealand’s marine habitats with a special focus on small cryptic species which has revealed incredible diversity of triplefins and clingfish around New Zealand. Cylix tupareomanaia is the first new genus and species of syngnathid to be reported from New Zealand since 1921 and it just goes to show how much more marine diversity is yet to be discovered in ocean environments. [BioOne]