Today’s reef tanks are a far cry from the natural reefs we (used to) try to replicate with more attention being paid to the arrangement of the rocks before the tank is even filled, than how the living animals will look once they are placed on the rocks and allowed to be grown out. In a time when it seems like the vast majority of reef aquariums are trending towards a common instagramable radioactive fluorescence, it’s a breath of fresh air to see a saltwater aquarium from a completely different perspective.

We welcome diversity and experimentation, and we love seeing how creative some reef aquarists have become but many of you will agree that far too many saltwater aquariums are guided by the sole principle of ‘if it ain’t NEON it shouldn’t be on“. Thankfully, once in a while we get to see the kind of saltwater aquarium display that jolts us out of the numbness that social media is causing many of us to feel about the reef aquarium hobby.

Aquarium Design Group is more than a store, more than an aquarium service company, it would be most accurate to describe ADG as a philosophy-driven group of aquarium creators with a religious devotion to the craft of aquarium aquascaping of all types. It’s in their Houston based aquarium gallery that we came across a couple of ‘saltwater coral aquariums’ that moved something in us which had been stagnant for a long time.

The first of these is 20 gallon all in one tank with the most magnificent display of bubble tip anemones in their long tentacled form that we’ve ever seen. This cube-shaped aquarium is filled with the most innocuous strain of jade green Entacmea quadricolor that take up almost the entire volume of the aquarium from side to side and front to back, but not top to bottom. What ties this saltwater aquarium presentation together are the beautiful pink-orange tips which dance in the water flow like fireworks against the dark, mostly muted rocks and anemones. 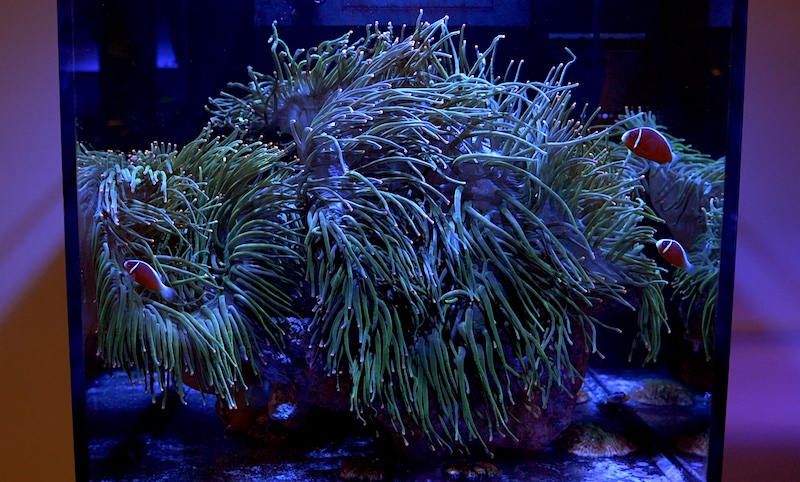 Many other reefers would be tempted to pack in a ton of clownfish into the colony of bubble tip anemones, there’s surely the tentacular real estate available for it, but one thing that typifies ADG’s creations is restraint, and to this end they only added a small trio of wild pink skunk clownfish, Amphiprion perideraion. The only other fish inhabitant of this anemone cube reef display is a helfrich’s firefish leftover from the previous iteration of this particular aquarium.

Some more details about the tank include about 20 to 25 pounds of Cornerstone rock, a Platinum DC Slim Wave pump, and is lighted by an AI Prime LED running a balanced, blueish spectrum somewhere around 50% intensity for nine hours a day. Although you can barely tell, there are about seven anemones total in this tank which were acquired from a tank reset performed by ADG and the only other inhabitants are four small Heliofungia fralinae plate corals with attractive orange accents. 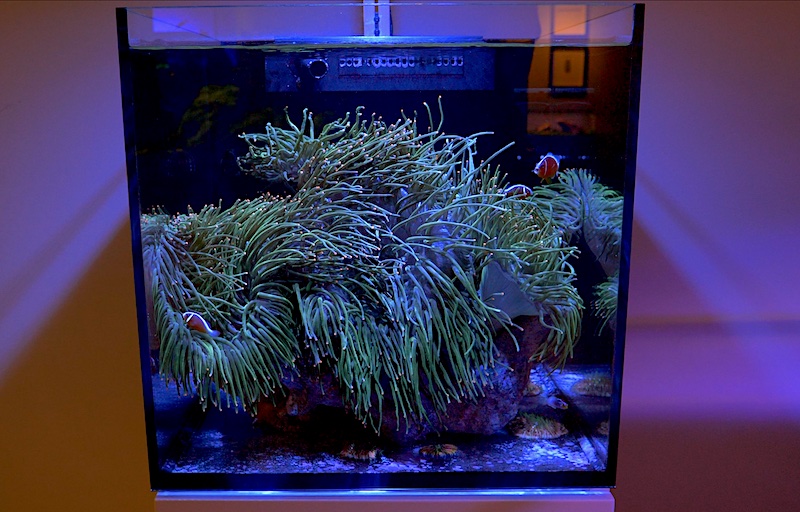 This minimalist style aquarium aquascape hearkens back to the most minimal aquascape of them all, our very own EcoReef Zero which consisted of only a small elegance coral. In fact when we first saw this tank we couldn’t tell right away whether we were looking at a group of anemones or one very large, overgrown Catalaphyllia elegans which are well known for their attractive colored tentacle tips.

We’re not surprised that this minimal style aquascape was created by the ADG scaping team but we just wish they would do more, like a lot more of it because the saltwater aquarium hobby desperately needs this kind of artistic injection into the aquascapes that inspire us. Thankfully we have one more, larger reef aquascape that we plan on sharing with you and this more ambitious coral-scape we will be much more relatable to reef aquarists that are looking for an easy and elegant reef scape to be inspired by.

Ocean Queen is a New Skimmer Teased by Aqua Medic