Cirrhilabrus apterygia, the Mutant Comes Home to the Fairy Wrasses

Cirrhilabrus apterygia is the new name for a fish that’s been known to science for many years, but is so bizarre that one of its common names is the mutant wrasse. First described as Conniella apterygia in 1983 this particular wrasse from the Rowley Shoals of northwestern Australia is nearly identical to Earle’s fairy wrasse from Palau in overall appearance save for one discrete but profound difference.

For reasons unknown this rare candy striped fairy wrasse has lost its pelvic fins and all associated integument which is such a drastic physical difference that the Conniella genus was erected for the original species description. This was a very reasonable thing to do since the presence of pelvic fins is a defining feature of many fish groups but further examination of the mutant wrasse and its lonely genus placed it squarely within the Cirrhilabrus genus of fairy wrasses. 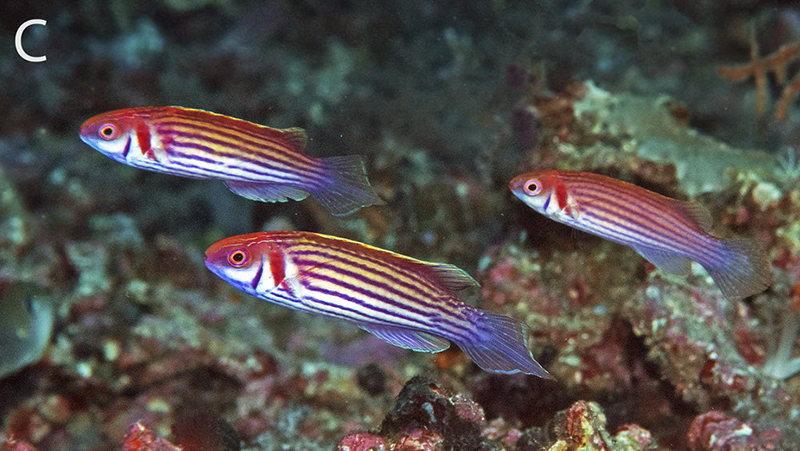 There are no good explanations as to why the mutant wrasse lost its pelvic fins, but since many wrasses propel themselves mostly with their pectoral fins, perhaps this trait first appeared as a congenital defect which wasn’t detrimental to their survival and became passed down through the small population of this limited range species. The new generic placement of Cirrhilabrus apterygia is not a new species but a new combination which brings the total number of described fairy wrasses in the Cirrhilabrus genus to 64 with a handful more that are deserving of further investigation. [ZooTaxa]