Chromis norfolkensis and C. sahulensis are two new species of one of our favorite group of reef animals, the damselfishes. Like several of the most recently described species of Chromis especially, the new species have been teased apart from other common and well known species for a variety of distinctive features and fairly separated natural distribution ranges.

Chromis nitida on the left and C. fumea at right are closely related to the two new species recently described.

The first of the two new Chromis species is C. norfolkensis, pictured at top, which was previously considered a color form of the showy barrier reef Chromis nitida which has a an attractive bicolored color pattern of a white body, gold head crown and a black bar separating this transition. the Norfolk damselfish Chromis is superficially similar with a white body but the dark coloration is more grey, covers more of the upper body and it doesn’t the black bar bisecting the dark upper and pale lower body. 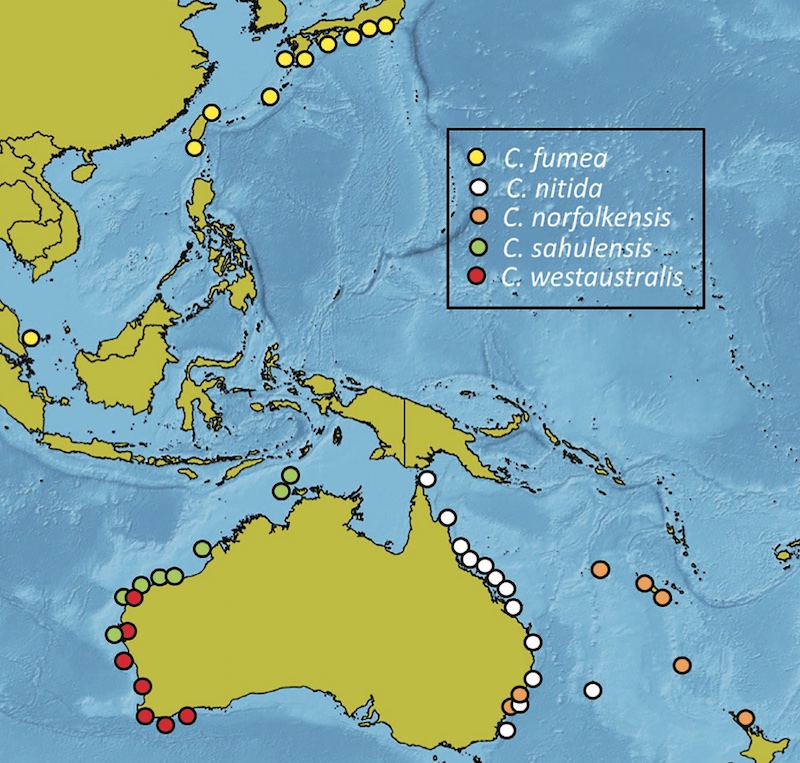 Whereas the barrier reef Chromis nitida is mostly restricted to hugging the east coast of Australia over much of the Great Barrier Reef, as its name implies the Norfolk Chromis is known mostly from Norfolk Islands far East of Australia with a few individuals reported from southern Australia.  There’s a similar story on the other coast of Australia with the West Australian Chromis, C. westaustralis, being replaced in the northwest by the newly described Chromis sahulensis.

As much as we hate to admit it, the Sahul Chromis has a certain ‘baitfish’ quality about it with a mostly grey color overall which is punctuated only by a black spot at the base of the pectoral fins, a white spot on the dorsal side of the caudal peduncle, and two black bars demarcating the lobes of the tail fin. Not all of the new species of reef fish that get described can be as memorable as illustrious species like the Goldring Chromis but we’re still glad to see that taxonomy is constantly learning more about the diversity of our beloved damselfish.