It would be easy to look at the promotional images for Cohda’s Power Tap glass featured above and below and just think that these are simply modern-chic designs with lots of glass, minimalism and smooth surfaces. But if you look a little closer you’ll notice that there’s something peculiar going on since there’s a number of electrical devices originating straight from the glass without any obvious wires or connections. 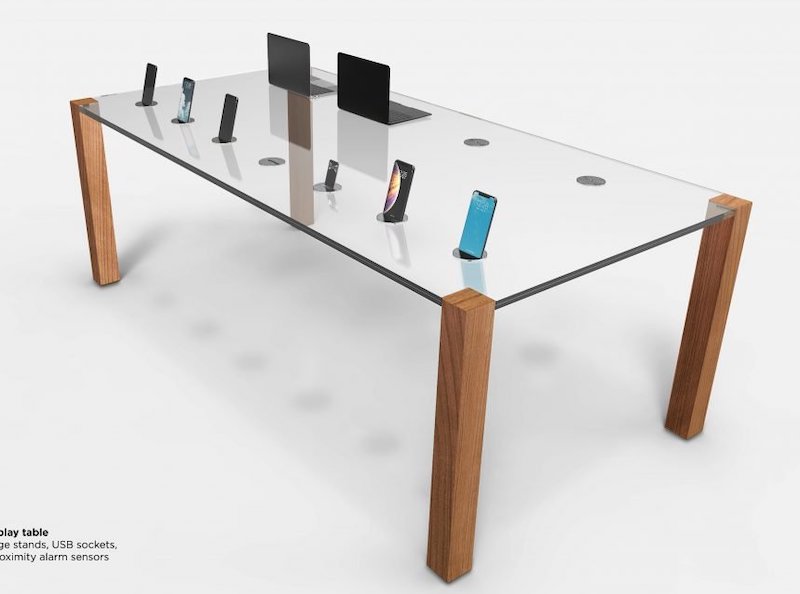 The reason for what you can’t see is that these creative concept renders are meant to inspire designers with what is possible with Power Tap glass, also called ‘electric glass’, which is made up of multiple layers of our favorite transparent material with some of those layers being made of conductive laminations which can transmit power and communication. power Tap glass creator Cohda sees a lot of potential for using this invisibly powered transparent material for use in point of sale displays in boutique jewelry, electronics shops or posh museum style settings.

Videos of a working glass table made with Power Tap technology shows a number of different accessories snapping into preset electrical access points (like MagSafe) to power LED lights, some in spots and others in strips, as well as a small fan to inject a bit of movement into the scene. The other concept renders also seem to show that the technology is capable smartphone charging points and induction stove heaters and even a built-in flat panel display.

As soon as we realized what Cohda’s Power Tap glass is capable of our mind immediately conjured up visions of an all glass aquarium incorporating these futuristic features. They’ve already got lights, a small fan which could just as easily be a propeller pump, as well as induction heating, all of which could be repurposed to illuminate, flow and keep an aquarium warm without any wires whatsoever!

The Power Tap glass does appear to have a slight tint to it which could be fine for use in the bottom and back wall of the aquarium while the side and front viewing panes could still be the high clarity glass we know and love to create an ultra modern concept display tank the likes of which the aquarium world has never seen. Since one concept is used to show a kitchen countertop with a sink we imagine that there’s ways to make Power Tap glass safe for use around freshwater but it might take some refinements to make it extra safe for use in and around saltwater to create the display reef tank of our dreams. [Cohda]