Of all the coral species that can make us rubberneck at a reef aquarium conference we have to admit that Moseleya is rarely able to elicit that kind of response. Save for few exceptions the honeycomb-shaped moon coral is almost always a dull shade of army green, olive green, forest green, basically anything but neon or fluorescent but that’s not what grabbed our attention about this colony we had to have.

While virtually all colonies of Moseleya have somewhat of a central polyp and surrounding corallites of equal sizes, the very bizarre example we spotted in the ReefStock booth of Fort-Collins based The Fish Crew almost looks like a completely different coral species. At first glance the mostly green, large singular corallite with a purple oral disc and a really flat colony shape that is almost five inches in diameter really looked like the rare Echinomorpha chalice coral in morphology. 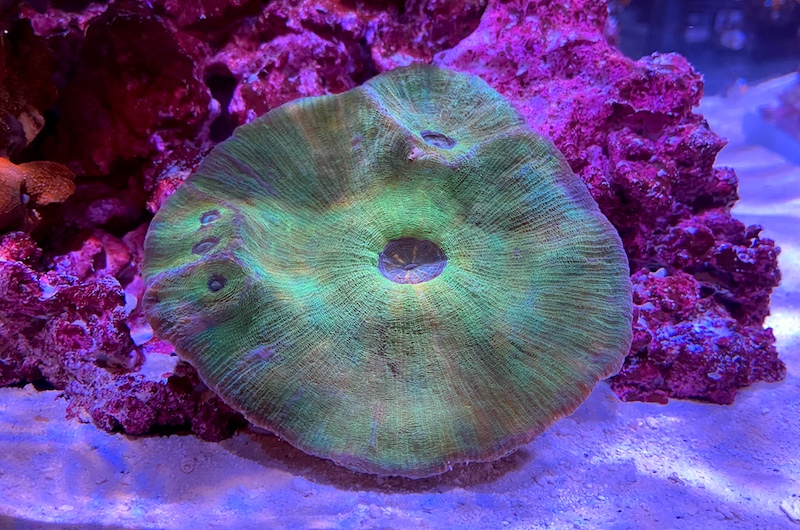 Closer examination of this very smooth colony revealed that this coral is actually a very confused Moseleya latistella which is known to develop into more flattened shape in silty habitats so we can only imagine that this example might have grown in a muddy near-shore environment. There’s no doubt that the single recognized species of Moseleya is already a unique species of stony coral and while they might not get much fan fare in the aquarium world, this is one colony that we were very glad we added to our collection.

We’ll be keeping this coral with our grouping of Echinophyllia and Pectinia chalice corals under low flow and moderate mostly blue lighting to encourage the colony to continue growing with this unusual nearly solitary morphology. Big thanks to The Fish Crew for showing us something we had never seen before and we have many more interesting observations about reef life yet to share with you about our coral encounters at last weekend’s ReefStock Denver.

Chicago Sunburst Anemone is Yellow Under LEDs and Red Under Halides