The Quanta Pro is a new LED strip light from newcomer Quanta Reef which is aiming to fill some gaps in our reef aquarium lighting. Quanta is offering their Pro LED strip lights in a familiar housing and form factor but with some very carefully considered spectra to bring out the best of out of your reef fish and corals.

The LED strip light is one of the most neglected aspects of the reef aquarium lighting market and this category has been vastly underserved since the advent of LED lighting. While most companies are either trying to build a light fixture with the richest feature set, or the cheapest possible bargain basement light at a nearly disposable price, the reef aquarium hobby is sorely lacking firmly mid-range options.

All of the Quanta Pro LED strip lights are IP65 dust and water resistant with individually lensed LEDs which are quite numerous and closely spaced together. It’s pretty standard these days for most higher power LED lights to have around one diode per inch and driving them around 1.5 watts each but the biggest differentiation of the Quanta Pro strip lights is how many LEDs they use.

The Quanta Pro has around 1.7 LEDs per inch and is driving them at less than one watt each which leads to a number of benefits including greatly improved luminous efficiency and much better light spread and color blending. This closeness of the LEDs is especially important for Quanta Reef’s Pro strip lights which come in four different spectral profiles that are made up of various colored LEDs.

To our amazement Quanta Reef writes a lot about their lights but doesn’t list the precise LED colors inside their OG pop, Meso Blue, Tropic Sun or Reef Crest strip lights. Together  these are designed to mimic some of the most popular T5 bulbs and multicolor LED light programs of programmable fixtures and can be used in multiples to create a broad even light spread over a reef tank. The Quanta Pro strip lights are non dimmable and start at $140 for the twenty four inch lights and go up to $325 for the six foot long light bars. [Quanta] 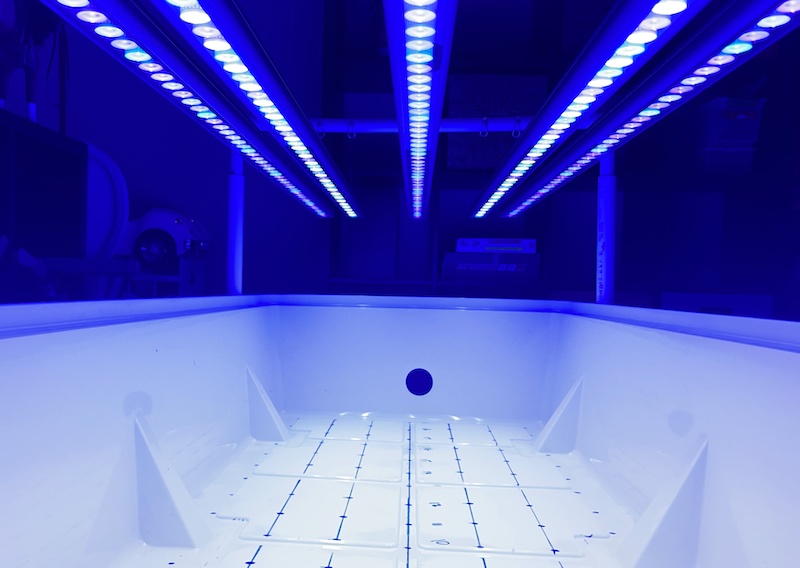