There’s no question that Euphyllia (Fimbriaphyllia) have become some of the most popular aquarium corals of all time coming in a wide range of colors and tentacle shapes. Like many other collectors we have a couple dozen varieties spread across our aquariums and we thoroughly enjoy comparing their varied forms.

It’s one thing to compare larger colonies in various states of development but a new spread of captive spawned Fimbriaphyllia polyps truly showcases these perfect flower animals where you can really appreciate the range of hammer and frogspawn colors. These F1 aquarium grown corals were produced by Inter-Fish in Australia and it follows up on some previous success the company had with spawning five species of Australian coral back in 2020.

What we find most fascinating about this bouquet of tentacles is that there are clear F. ancora hammer corals, some obvious F. divisa frogspawn coral, but then there are some tiny examples of what the hobby has come to call ‘Frammers’ – a portmanteau of Hammer and Frogspawn. These supposed Frammer hybrids show an intermediate form of tentacles that is between the hammer shaped tips of ancora and the multiple tipped tentacles of divisa. 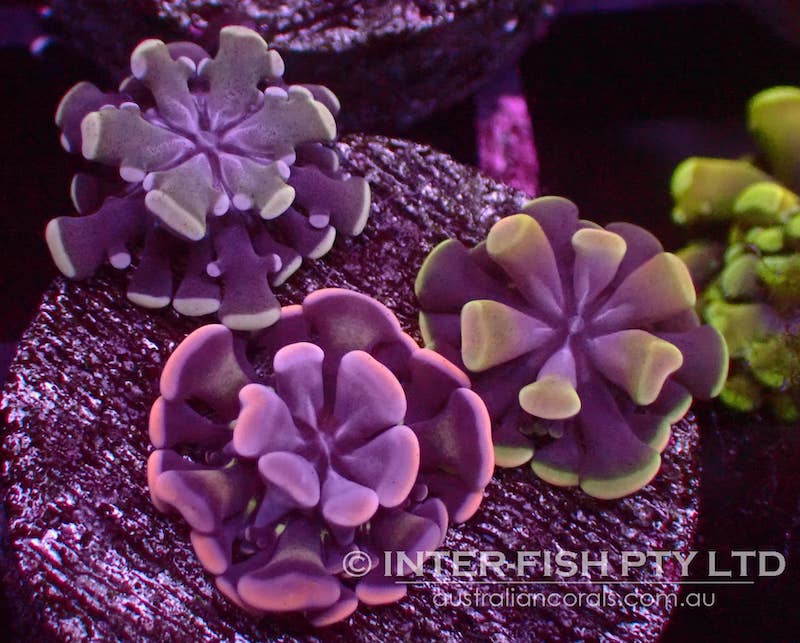 We’d love to know more about how these corals were produced, whether ‘Frammers’ were used in the spawning effort, or if the gametes of ‘pure’ hammer and frogspawn corals were purposefully or accidentally crossed, or maybe the hybrid tentacles simply arose out of the soup of eggs and sperm. These are the early days of successful coral spawning in a captive environment and between the hybrids, the chimeras, and the creation of new genotypes we have a lot of exciting times to look forward to in the development of new and more sustainable coral strains in the future of reef aquarium keeping.

A Multilevel Display for Shrooms, Chalices and Anemones [Video]