The Frankentank – Building One Large Tank from Two Smaller Ones

You may have heard of pet rescues and shelters, usually for our furry pets like cats and dogs but there is a growing number of places around the country that specialize in rescuing overgrown and very large monster aquarium fish. One of these places is called Fish Story Aquarium & Rescue and we’ve been enjoying their video content on their YouTube channel for some time now as it features some very large scale aquarium projects that usually involve 1,000 to 10,000 gallon plus aquariums and unique ways to approach aquarium systems that are one or two orders of magnitude larger than our typical reef tanks.

One of their newest videos is a very unique endeavor to build a 300 gallon aquarium from two well-used 125 gallon glass aquariums which can often be found very cheaply from aquarium classifieds or your local aquarium club – sometimes they are scratched up possibly with broken braces and be had for free or simply the labor of moving them out of someone else’s way. The process of turning two tanks into one larger vessel is not for the faint of heart as you’ll have to remove panes, cut glass, and use a copious amount of silicone to fill in the gaps of a ghetto-fabulous merger between the two. 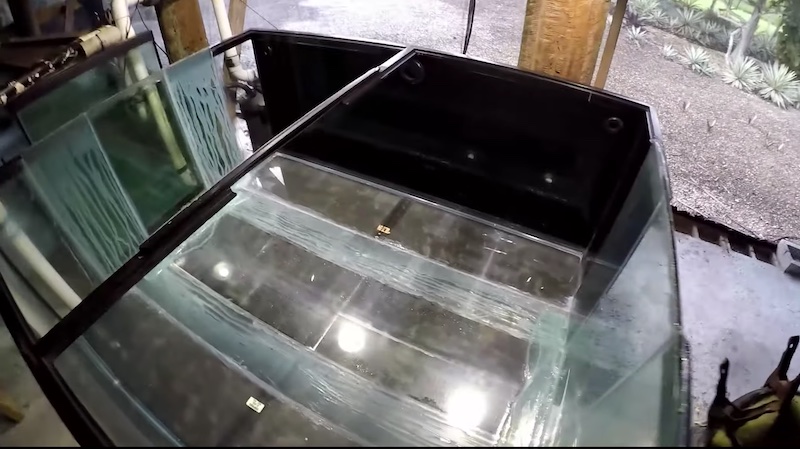 In their video Fish Story first places both tanks on a very level platform consisting of a concrete slab and carefully sized cinder blocks to support both aquariums. Once the measurements have been made and both tanks are both level and flush with each other they removed the back pane of one aquarium, and the front pane of the other to use as the joining panes. One of the pane was trimmed by just an inch so it could fit neatly along the bottom of both tanks with a few extra inches between them to further increase the volume of the finished tanks.

The second large piece of glass was cut in half to form the two new panes that would merge with the side panels and all the glass was ground to a smooth edge to try and make each joint as neat as possible. To form the remaining structure of the two now partially dismantled aquariums the modified glass panes made a lot of overlap with the surfaces of the old glass creating big areas of opaqueness on the sides but the main viewing area is from the front area anyway. Lastly, the center braces of the two previous tanks were extended to hold both panes together and keep them from bowing.

It goes without saying that this kind of DIY project is for the brave and very confident, there’s a high probability that you’ll have to patch some leaks, and the odds of successfully moving a franken-tank like this are next to nil. With the costs of all products and their materials rising due to supply chain shortages and inflation we might see more reefers and other aquarists creating larger aquariums using the Frankentanks approach like this in the future; it might not be for us but it’s still very cool to see creative options like this being explored by Monster fish keepers wanting a big cheap aquarium.

Baby Dr. Seuss is the Cutest Soapfish We've Ever Seen

Why Do Urchins Like to 'Wear' Corals and Rubble as a Hat?