Marble Mouthed Frogfish bred for the first time in captivity

A marine biologist has captive-bred a species of Anglerfish for the first time. Christian Göbel of Deltec GMBH obtained, spawned, and successfully raised the Marble Mouthed Frogfish, Lophiocharon lithinostomus, and documented his results. Working in conjunction with Deltec, Aquadesign and the Leibnitz Centre for Tropical Marine Research “ZMT” in Germany, Christian purposefully chose Lophiocharon from the subfamily Histiophryninae because the eggs are large at nearly 5mm diameter, versus the tiny pelagic eggs of the much more popular Antennarius genus. The pelagic nature and need for specialized foods is what makes rearing so many marine fish species so difficult, but with Marble Mouthed Frogfish hatching at such a large size, looking back he describes breeding them as fairly easy!

How he bred them

Potential brood stock was obtained but separated until a female was identified by her belly swelling up with eggs. A male was then introduced who followed the female around in close contact until spawning. Spawning took place at night with the female laying around 500 large eggs before carrying the egg cluster between her fins on the side of her body and bouncing them to keep them aerated.

Hatching occurred after 2-4 weeks and although hatched still with yolk sacks, the breeder offered the fry Artemia nauplii and copepods and they fed straight away. As the fry grew they were offered semi-adult and adult Artemia, Mysids, Amphipods, Juvenile Poecilia spp. and Palaemon spp. shrimp in that order, daily, for three months. Then at three months, feedings for the 1.5cm juveniles were reduced to every other day. Roughly 6 months from spawning, Christian has 30 healthy 4-8cm juveniles, raised from 100 fertilized eggs. The eggs were robust enough that even if abandoned by a female, all artificial incubation methods still offered success in hatching the young frogfish. With the captive breeding success of Lophiocharon lithinostomus under his belt (complete with written records, photos, and videos,) Christian has decided to dedicate himself to breeding this amazing group of fish. He does issue a warning however on the keeping of other frogfish in captivity long-term. 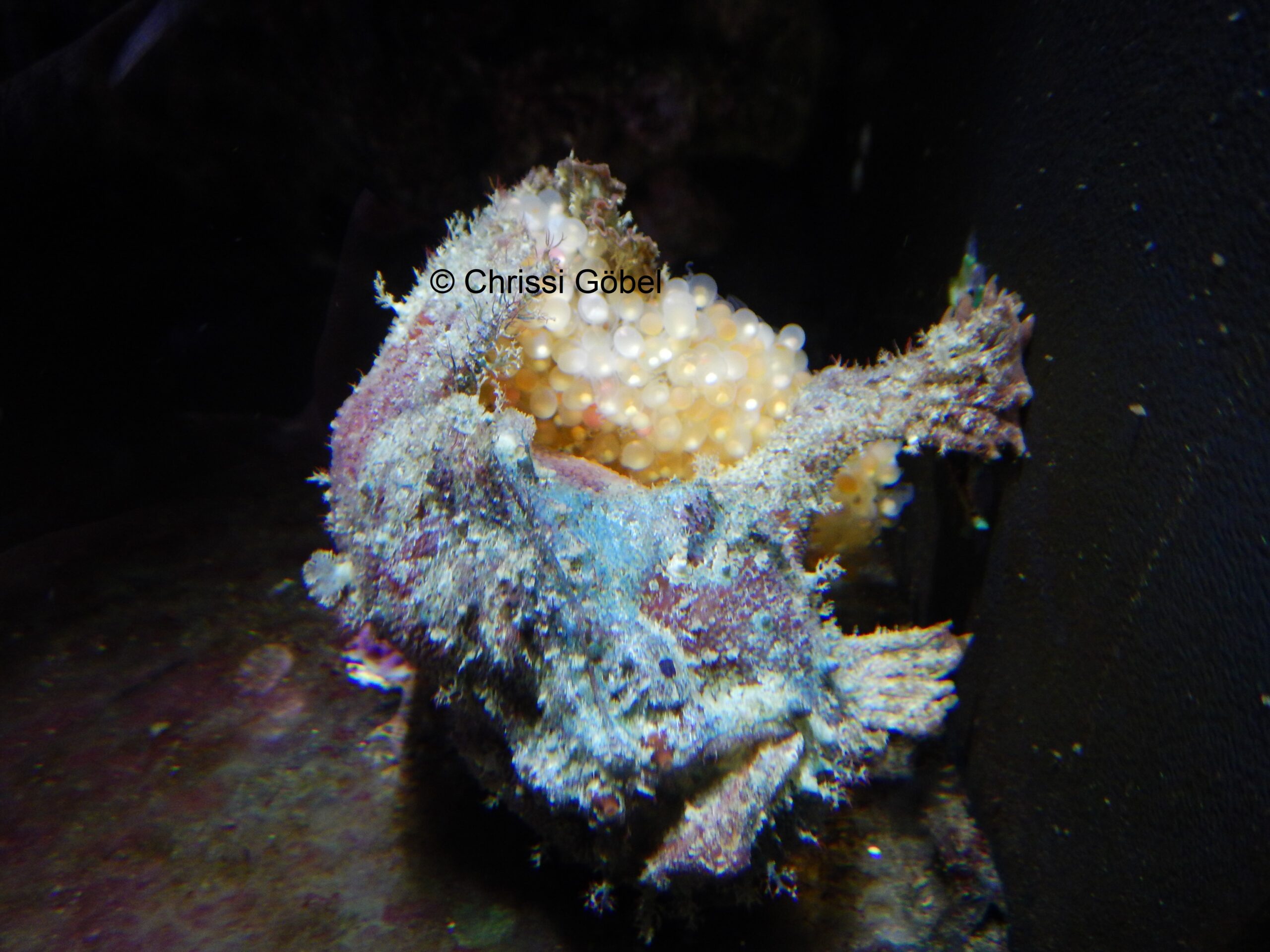 “Anglerfish (Lophiiformes) are among the most bizarre and fascinating animals on our planet. In contrast to their famous deep-sea cousins, most Frogfish (Lophiiformes: Antennariidae) live in shallow coastal waters, showing astonishing colors while mimicking sponges, corals, macroalgae, and more. Besides their luring behavior and special locomotion, these features make them interesting aquarium fish. Indeed, many aquarists around the world can’t resist a frogfish’s charm and bizarreness when spotted in a pet shop.”

“Unfortunately, the special needs and housing requirements of frogfish are often underestimated. As they feed occasionally only, the nutritional value of each single food item is of major importance for the health of the fish. Compared to most marine aquarium fish (e.g. zooplankton feeders), frogfish – and other ambush predators – are less able to compensate for the nutritional deficits of one food item with the next. (This is one example of why frogfish are actually hard to keep in the long run.) Like most marine ornamentals offered in the aquarium trade, frogfish are wild-caught. Once spotted in their habitat, they are easy to collect, and therefore, some species are ever present in the aquarium trade. “

“Based on my own experiences as well as communication with traders and hobbyists, I assume that most frogfish only survive in captivity for a certain amount of time, until their body’s natural reserves of certain essential substances are used up (although exceptions may occur). They belong to the group of marine ornamentals, which I sarcastically call “buy-starve-buy-starve” (another “BSBS” example would be dragonets). The advantages of tank-bred ornamentals compared to their wild conspecifics are well known: They are much more resilient and easier to keep as they are well adapted to aquarium conditions and go well with common fish food such as frozen food or even pellets.”

So it may be some time before we see tank-bred Antennarius spp. Frogfish for sale, but the key to breeding yet another saltwater fish has been unlocked, helping us to better understand and conserve them for the future.

Isopora is the Most Common Coral You've Barely Heard of