ReefStock 2010 pictures part 2: so many LEDs under one roof

With over 30 aquarium LED products showed off by more than 15 companies at this year’s ReefStock, were going to go ahead a call it: The future is now and LED lighting has truly arrived to the aquarium world. Spotlights, Striplights, moonlights, twilights, power lights and all form of DIY lights used LEDs to light up the ReefStock conference at the Denver Downtown Aquarium last weekend.

In addition to the predominantly LED-using coral frag vendors, the LED lighting demonstration featured lights from Japan, Hong Kong, England and especially the United States. Despite some nefarious restrictions there is no way to hold back the floodgates of aquarium LED lighting anymore and the pictures below demonstrate just how much is available now. Follow the break to see what the future of aquarium lighting will look like. Huge thanks to Adam Knudson of Devo Photography for working very hard to get us all these pictures.

The Aquaray 1000 HD tile may be somewhat exotic in the states but of course it was present at the reefing world’s largest LED light show.

The thin A102 Acan light drew a lot of looks and comments for it’s sleek and attractive lighting fixture.

Volx Japan’s Ledio LED spotlights are some of the most popular in Japan and they were very kind to send along some of their finely crafted spotlights to show off in the ReefStock LED demo.

Volx Japan’s LEdio spotlights come in a wide range of colors including the mystery purple in the center and the all royal-blue 21 watter to the right. 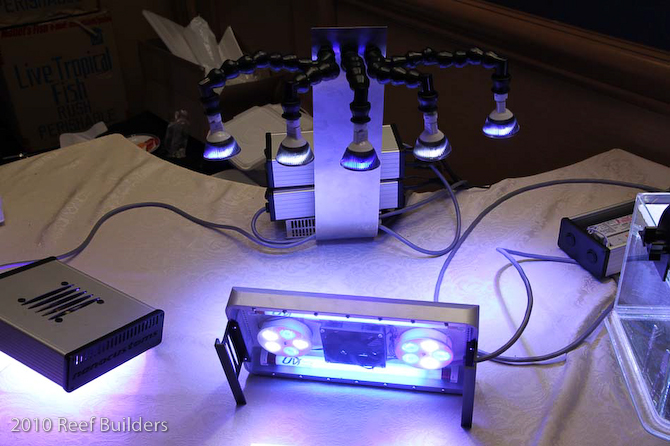 The NanoCustoms booth was a good place to see LED lights in a range of form factors for the nano reefing crowd.

We put on ReefStock specifically so we could get our hands on exciting new products, like the unibody T5+LED hybrid light

The unibody hybrid LED + T5 light from NanoCustoms is truly in a league of it’s own in terms of power and color rendition.

The MR16 LED spotlights were shown off at ReefStock before anywhere else.

The diminutive MR16 LED spotlights will be a hot ticket when they become widely available to the reefing hobby. 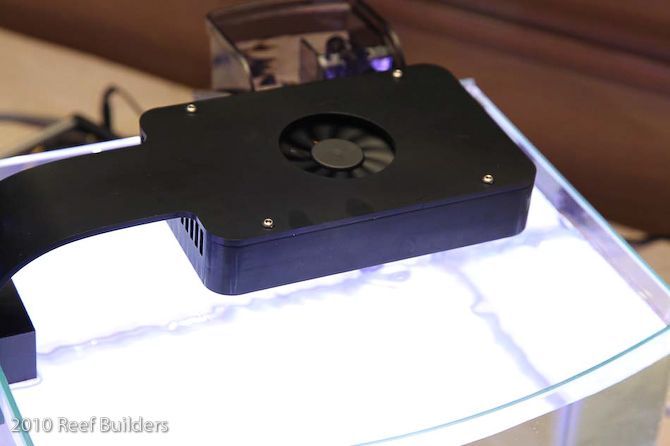 The actively cooled picolight from NanoCustoms was quite a looker at this show.

A closer look at the brightness within the CNC milled pico led light.

With 5-6 new LED lighting products to demonstrate the NanoCustoms crew really represented at the reef hobby’s most techno-centric aquarium conference.

Newcomer to the reef aquarium LED lighting scene BlueMoon also made an appearance at ReefStock with the slab of LED lights; only Harvey Fell could commandeer a booth which wasn’t on the floorplan the way he did.

Ecoxotic showed off their new all blue Panorama LED module which can also be retrofitted with light-focusing lenses.

Ecoxotic showed off an uber thin platform from which to attach LED stunners into adequate lighting for a near-pico reef.

The all-blue PAR38 LED light from NanoCustoms was seen at ReefStock; it will be a welcome addition to the 2:3 and 3:2 blue:white PAR38s that have made nanoCustoms a leader in reef aquarium LED spotlighting.

Even the freaking EcoSmart VorTech controller was sporting a buncha LEDs.

Checking out the undercarriage of the AcanLighting A102, the north american version of the EcoLamps KR92

Cherry Corals has been a long time user of AquaIllumination LED lights.

The 50 watt LED photon canon lights up a broad swath of the floor more than 3 feet away.

The ReefBrite LED striplights now can enjoy some company with the help of the 2,4 and 6 light brackets.

A closer look at one of several DIY LED lights at the ReefStock conference. Looks like this one was getting a little extra umph from an un-lensed CoralSky SL.

This unique light has built in fans and it uses small incandescent base spotlights that can easily be replaced or switched out to desired effect.

This ghetto-fabulous DIY LED job was hacked into an old current striplight. 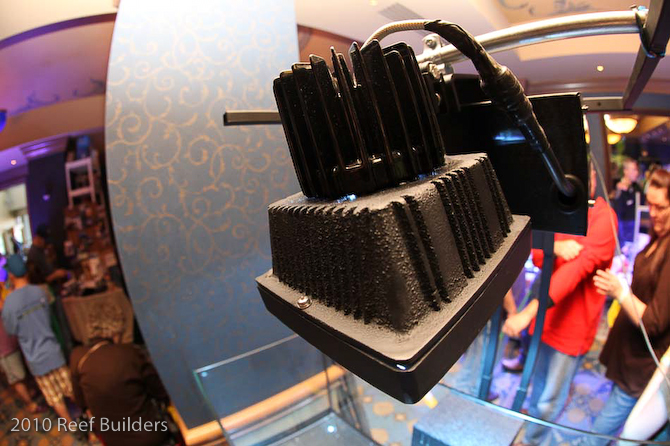 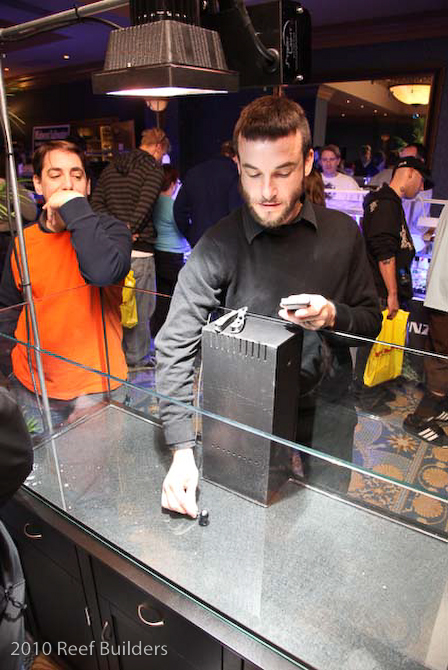 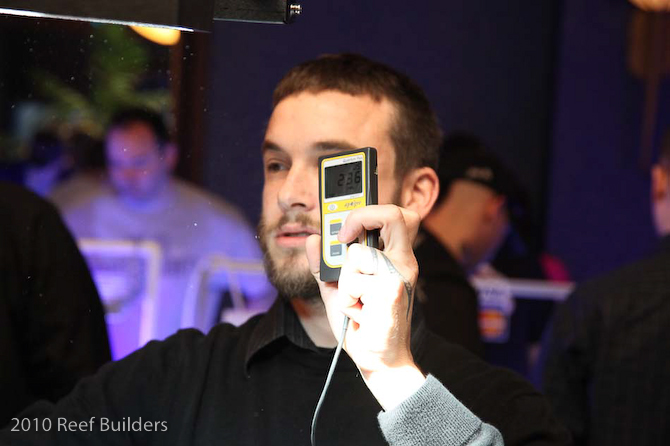 Gerald from Stray light Optical shows off how a single 250watt Seashine can be reflectorized to cast a rectangular shine over the 48″ x 18″ Solana XL 67 (that was so kindly donated to the ReefStock ReefScape competition by Current USA).

The same model of the Seashine LIFI light shining at a higher intensity on the right, and also sporting a much warmer color rendition.

Ecoxotic turned a solar collector into an 'Automatic Moonlight'