Sympodium is an interesting encrusting soft coral which is just beginning to show up in some coral shipments. We personally spied the Sympodium colony above tucked away in a corner of a display tank at Amazing Aquariums and Reefs and we’ve been getting reports of this genus showing up sporadically at stores throughout the country. Not to be confused with the “Blue Clove” polyps that became much more widely 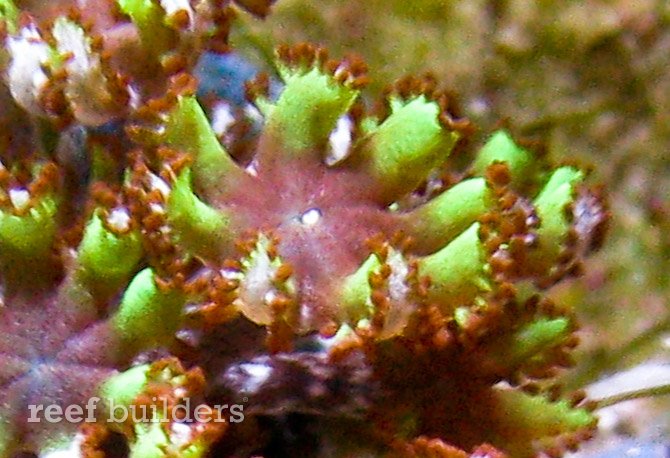 available in the last couple of years, Sympodium is related to Xenia but it does not pulse and it has much smaller polyps.

Better yet, the Sympodium colonies we’ve seen are pretty darn colorful with brightly colored blue or green topsides, contrasting undersides and large knobby reddish brown pinnules. About five years ago we obtained and kept a nice large Sympodium colony that was imported from Indonesia and we found it to be a very unique and undemanding soft coral. A few more pictures of Ali’s colony can be viewed after the break, as well as a detailed account and video of a blue colony from Reef Buidlers reader, Justin McGuinness. 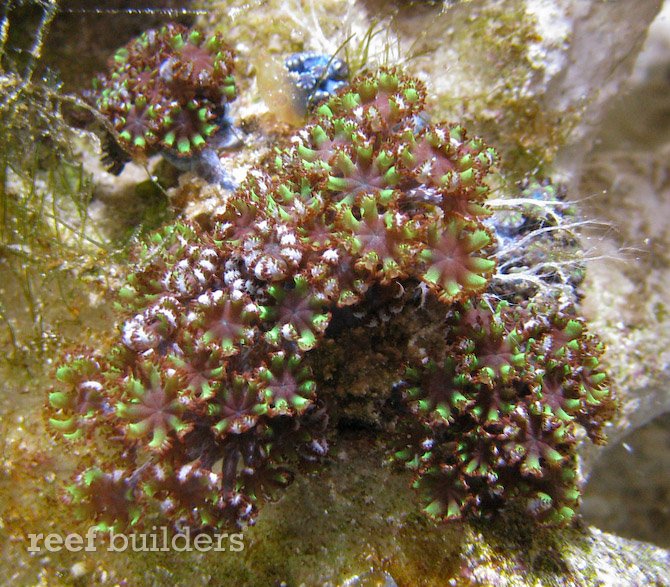 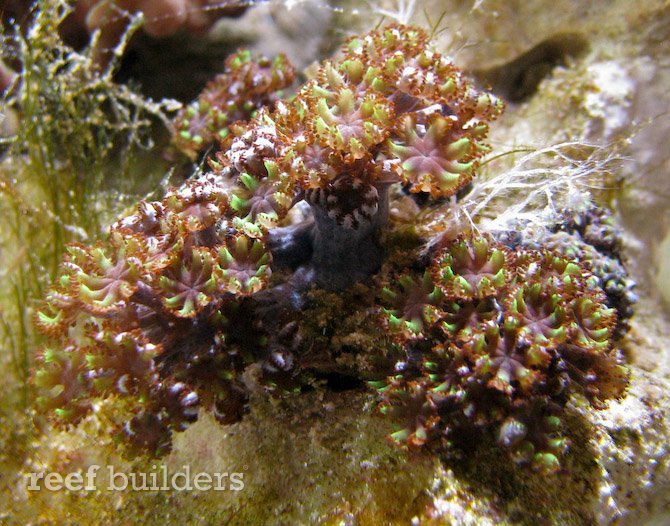 “This is the most amazing and colorful unknown soft coral I have ever seen. The colors are absolutely stunning and this is the first coral I have ever seen that looks much better under T-5 HO lighting than Metal Halide. I believe most would argue that this coral is in either the Anthelia or Xenia genus. Anthelia typically have individual polyps joined to a common encrusting base, whereas Xenia typically have a stalk with branches.

Although this coral is very compact, there appear to be several individual stalks which branch. I have also observed some individual polyps pulse on occasion. I strongly believe this is a new Xenia species! The center of each polyp (flower) is a brilliant blue which leads into a bright green on each of the tentacles which are “feathered”, the stalk is a knock your eyes out brilliant blue. This rock had some clove or glove polyps mixed between the stalks which looks quite nice. This is a 1/3 piece of a single rock with 10-12 individual colonies on it.

I placed each of the thirds into different tanks and different lighting and water flows. All three pieces opened up quickly and seem to like low, medium, and high flow. I did break a piece off of one stalk and the stalk itself seemed to break like a sponge would. It was more brittle than it appeared. I filmed it with my POS digital camera and I will film it again when I upgrade. If you have anything intelligent to add about this unknown soft coral please do so. This specimen was collected in Jarkarta a province of Indonesia.”