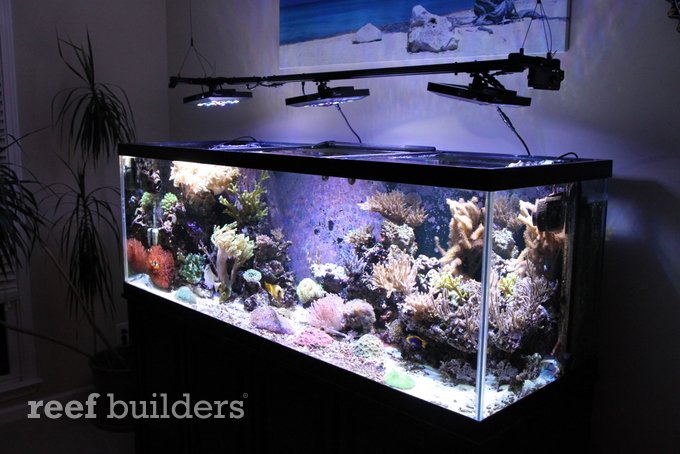 I recently shared the unboxing of Maxspect’s latest LED offering, the Mazarra P series. Well here’s the review. I’ve recently replaced the metal halide/T5 fixture over my 180 -gallon with the Mazarra modules. The minimum number of modules for a 6 foot tank should probably be 4, with an sps-dominant tank probably better off with 6 of them. I decided to start with 3. I plan to add 2 more, but money is tight with Christmas around the corner. 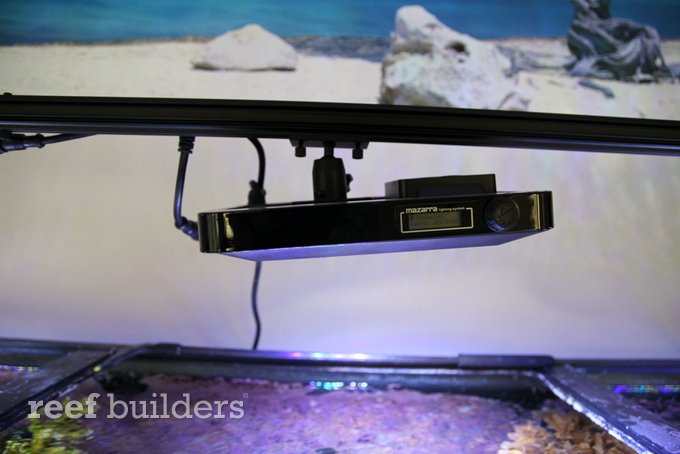 To recap, the Mazarra P series consists of 60-watt modules, housing a variety of LEDs. One of the unique aspects of the Mazarra is the ball-joint mounting arm and light rail. The other cool feature is the ability to swap out individual LED chips with a screwdriver.

INSTALL:
The rail mounting system offers a variety of ways to position the lights over your tank. I really wanted to use the tank mount brackets, but they will only work on trim up to .78″ thick. The trim on the 180-gallon was clearly too wide. I think the brackets are designed with rimless tanks in mind. It would be nice to see a bracket compatible with wider trim. My Metal Halide fixture was suspended from the ceiling, and I decided to do the same with the Mazarras. Fortunately, the wire suspension uses the same ceiling anchor as my old light. All I had to do was adjust the light rail to line the wires up with the old anchors. The main rails attach to each other via smaller rails inside. Therefore, you can slide the outer rails to the correct length, and tighten the screws to clamp down on the smaller attachment rails… Easy as pie. 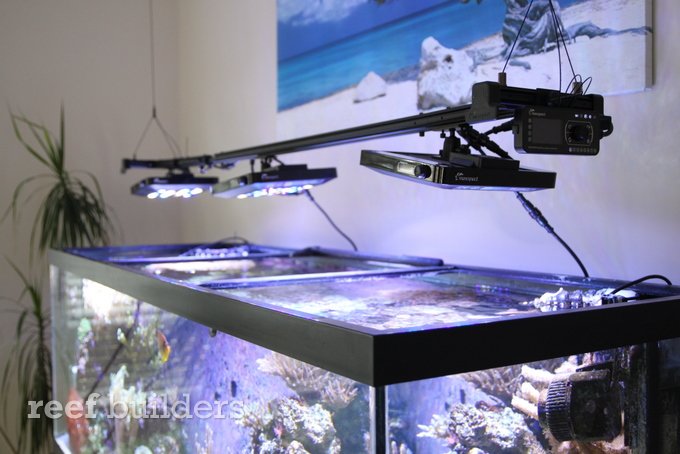 SETUP:
Starting with only 3 modules, I opted to use 100 degree optics for improved spread. Even with the wider optics, using 3 modules is a stretch to illuminate an entire 6-foot aquarium. However, you could easily modify your aquascape to work with the limited spread. Reefs with minimalist aquascapes could pull it off. LEDs provide a very focused source of light, and therefore you could illuminate individual coral “bommies”, and leave dramatic shaded areas for low light corals. Glass scraping and other algae issues would be easier to manage as well. In my tank, I have two large rock islands. I think 2 modules per island would probably suffice. 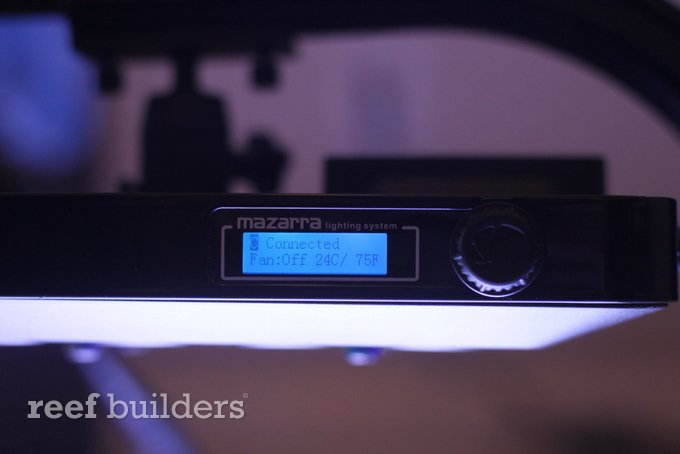 The onboard controls are handy if you choose to forgo the wireless controller. But you are stuck choosing one intensity level for each channel, and will need to rely on an appliance timer. I think the Mazarras really shine with the wireless controller. You can simply set the time, and choose the default time phase program. It will ramp up/down the various LED channels according to time off day along 8 time points. In the wee hours, it leaves some of the blue LEDs at 1-2%, to simulate moonlight. Alternatively, you can also create your own time phase, and choose your own intensities per channel at 8 time points. With multiple modules, you can also add a dawn/dusk mode. This feature simulates the sun rising and setting over the horizon of your tank. Lastly, it lets you add a little weather for fun. You can choose the frequency of clouds, which it simulates by briefly dimming the modules individually over the span of your tank.

The Mazarras are engineered for passive cooling, therefore the fans come unattached. The manual describes the fans as being optional, in cases where the modules are in a confined space(like a canopy). Even though my install is open aired, I still chose to run the fans. The fans are extremely quiet, consume very little electricty, and probably improve LED longevity further. So why not? 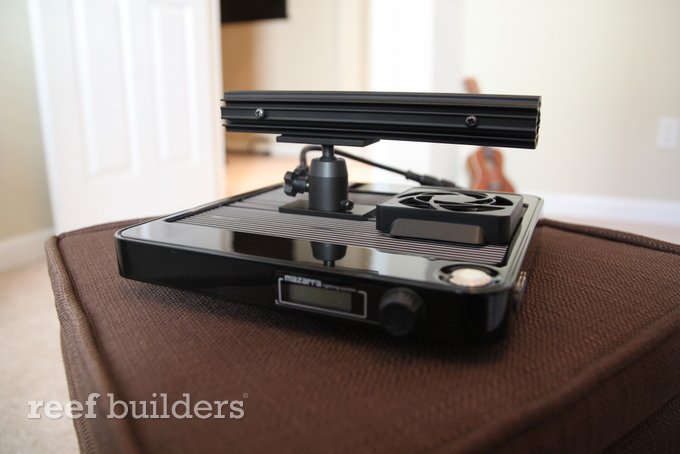 BUILD QUALITY:
The design and functionality are exceptional. But what about the quality? I ran into two issues. The first was some missing screw holes in the ball-joint arms. These holes accomodate screws to keep the mount in the same position on the rail with friction. They aren’t really necessary, as there is enough friction to keep things in place. This is a brand new product, so there may be some wrinkles to address. I also had one module not illuminating the D-Channel of LEDs. CoralVue and Maxspect were quick to respond, and helped me figure out the cause. The Actinic UV chips are more delicate to solder, and can be easily damaged with pressure. Once we identified the problem, Chris quickly shipped out a new set of them free of charge.  I’m sure they would’ve rectified the missing screw holes as well, but it wasn’t a big deal for me. In my opinion the support was thorough and quick.

IMPRESSIONS:
While I dig the the ability to angle the light, I think my favorite aspect is the quality of light spectrum. I’ve seen my share of LED reef lighting, and I deemed many of them to produce a very artificial and sterile light quality. I attribute it to the fact that most fixtures stick to cool white LEDs to compliment the blue. Maxspect’s inclusion of warm whites and purple actinic LED chips significantly improve the spectrum. Coming from 14K halides, I think the Mazarras produce a very familiar light spectrum. To me, they resemble the Phoenix 14k bulbs. 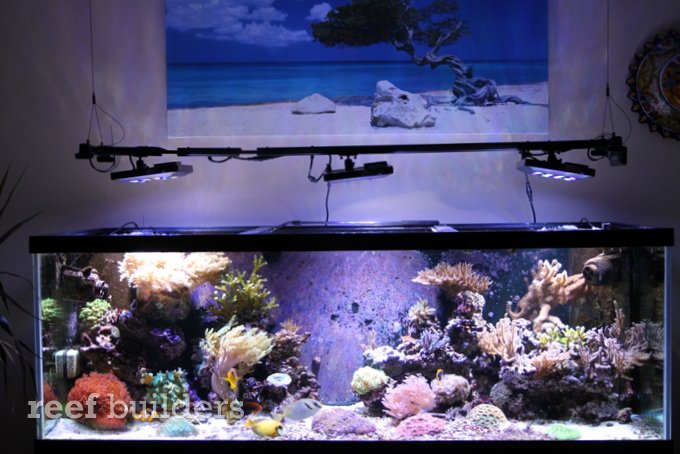 As far as the transition from metal halides into LED, I have no regrets. My tank runs 8 points cooler at 75 degrees with the Mazarras. The halides also produced a lot of light spillage. Not only did it light up the space around the tank, it also blinded my 1 year old daughter(from her viewing angle). A canopy would have resolved the glare, but it’s nice to have an open tank without light bleeding everywhere. My sps have been growing well, even with just 3 modules. After my planned addition of two more, I’m only running 300-watts of light versus almost a 1000-watts of metal halide/T5. While I’m sure a PAR meter would tell me the intensities aren’t comparable, I would argue that my reef never really needed as much light as I was giving it. I used to run the same tank with 468-watts of T5, and grew beautiful Acropora colonies. I feel confident I can do the same with a similar wattage of LEDs.

CONCLUSION:
Overall, I’m very pleased with the Mazarras. The positives far outweigh some small issues I experienced. The quality of light it produces in the tank is exceptional. The modularity and variety of mouting options make for a very adaptable lighting system. It can grow or shrink with you as you upgrade/downsize tank sizes. The optional fans are borderline silent. And I can’t think of many fixtures that include a variety of optics and easily interchangeable LED chips. I look forward to trying other LED colors in the modules as they become available. Lastly, product support appears to be good from both the manufacturer and their US distributor(CoralVue).

If there are any questions that I can help answer, leave a comment and I’ll do my best to answer. 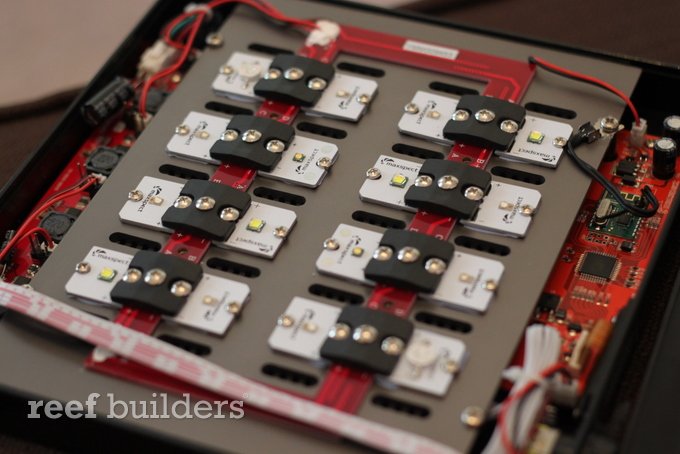 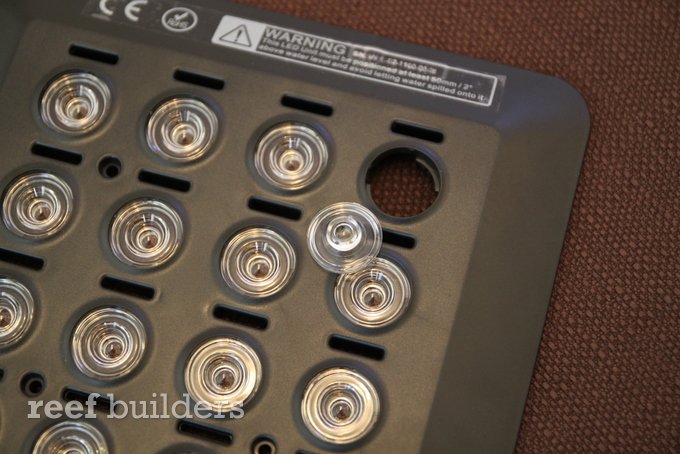 True Efflatournaria appears in the Diver's Den, looks more like Xenia than Cespitularia