Eshopps diversifying their sump filters with the FS Series Wet-Dry

Eshopps has added the FS series wet-dry to their arsenal of sump offerings. They have refugium sumps (R Series), berlin sumps (RS Series), and the usual wet-dry (WD Series). The original Eshopps wet dry models presented some obstacles as many internal protein skimmers require 9-11″ of water height, which would submerge some of the bioballs in a traditional wet dry trickle filter. Also, the skimmer water height was dependent on a float switch or manual topoff.

The “FS Series” addresses these potential issues. The bioballs are elevated above the sump further, to allow more water height while keeping the biomedia dry. A second compartment was added for the protein skimmer to run in a compartment with consistent water height. The 2nd compartment can also act as a refugium, a trend that is gaining momentum in the freshwater planted community. The FS Series comes in for sizes for tanks ranging 70-300 gallons. Availability will be first quarter of 2013.

Something else captured our curiosity in their Global Expo Booth. The FS series sump was running on a tank which had a auto top-off tank mounted to the side of the aquarium stand! While it is just something they built for conventions, it’s a pretty cool idea. As folks are maximizing sump sizes inside of aquarium stands, there’s usually no room for a top-off resevoir. This design is pretty brilliant. It’s easy to refill, easy to notice when a refill is needed, and mounting it higher than your sump allows you to harness gravity with a float valve! They really ought to consider making these available to consumers. 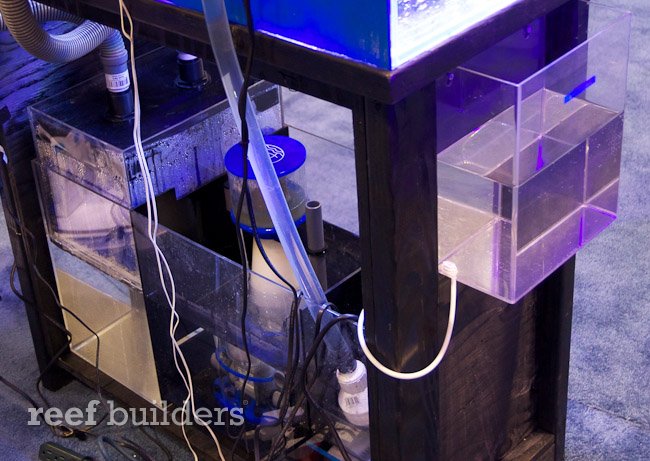 ReefStock 2013 exhibitors ready to show in Denver this weekend