Harlequin Tuskfish: A Charming, Colorful Wrasse for the Semi-Boisterous Community

Among the members of the vast Labridae family—the wrasses—are myriad gorgeous species. Some, owing to factors such as enormous adult size or extremely finicky feeding behavior, make poor choices for aquarium keeping. Others make very desirable aquarium candidates, staying relatively manageable in size and generally adapting well to captive conditions and menu items. Included in the latter group is the harlequin tuskfish (Choerodon fasciatus), a real eye-catcher from the Western Pacific.

Being rather robust-bodied, C. fasciatus departs somewhat from the “typical” labrid morphology—what I like to call the “banana-with-fins body plan”—but it’s all wrasse nonetheless. This species reaches about 10 inches in maximum length. Alternating vertical orange-red and white bands with blue-tinged margins (to varying degrees) give the harlequin tusk a distinct tiger-striped look. Perhaps most interesting is this species’ dentition—it sports four protruding, tusk-like front teeth (hence the common name) that actually take on blue coloration as the specimen matures.

In nature, the harlequin tuskfish feeds primarily on motile benthic invertebrates—crustaceans, mollusks, worms, etc. In the aquarium environment, it will accept (and should be offered) a wide variety of meaty food items of marine origin, such as chopped shrimp, clams, squid, and fish; mysid shrimp; appropriately sized frozen commercial formulas for carnivores; etc. Several small feedings spaced throughout the day are preferable to one heavy feeding.

Tusks don’t demand a great deal of swimming space given their respectable adult size. Still, I wouldn’t recommend a tank any smaller than around 100 gallons for a specimen. Make sure your setup includes a good amount of rockwork arranged to provide decent-sized caves and hidey holes for the tusk to refuge in—especially while it’s getting accustomed to its new home. C. fasciatus doesn’t bury itself at night like many wrasses do, so you don’t need to worry about providing a deep sand bed. 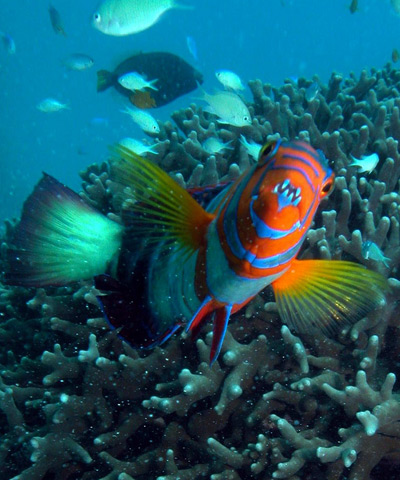 Despite its toothy appearance, C. fasciatus is not especially belligerent. Peaceful to semi-aggressive would be a fairly good descriptor for this species. Examples of appropriate fish tankmates would include other modest-sized, relatively peaceful wrasses, tangs, angelfishes, and triggers. As always, though, be sure to research the aggressiveness of any species you’re contemplating combining with the tusk and observe the rules for proper order of introduction.

Avoid keeping a tusk with any fish small enough to be swallowed. Also, conspecifics kept in the same aquarium will squabble, so keeping one tusk to a tank is advised.

A tusk in the reef?

As far as reef systems are concerned, adding a tusk might not be the best idea unless the tank is quite large. C. fasciatus won’t pick at or eat sessile invertebrates, but it’s still a decent-sized species that can add significantly to a system’s bioload through its feeding and waste production. Thus, the bigger issue in keeping this species in a reef system is maintaining water quality. Also, any motile crustaceans or mollusks in the system would be vulnerable to predation.

Worth noting when purchasing this species is the fact that the point of collection can make a big difference with respect to the specimen’s long-term survival. Specimens of Australian origin have a much better track record of captive survival than those collected in the Philippines and Indonesia. Of course, Oz-collected specimens also tend to come with a higher price tag, but it’s certainly better to pay a little more for a specimen that’s likely to live than to pay a “bargain price” for one that may be doomed.

A Personal Recap of MACNA 2013