Over the years, we’ve seen hundreds of different Palys and Zoas. In that same time, there were varieties we confidently called Palythoa and others Zoanthids. For example, I can easily point to a Palythoa grandis and say for sure that it is, in fact, a Paly. I would bet the farm on it! For starters, it has a massive green-and-brown-speckled polyp that looks like every image of a grandis I’ve ever seen online.

Similarly, there are a variety of tiny polyps that I have growing in mats. Zoanthids right? Not too many people looking at an image of Eagle Eye Zoas would think they are anything other than Zoanthids.

The problem is, the more Zoanthids and Palythoa I see, the more I come across individuals that are difficult to differentiate. For example, here is a picture of a polyp that I would call a Zoanthid based on the shape of the disc and the appearance of the tentacles: 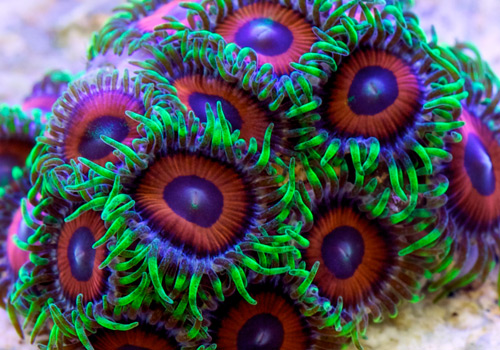 But it is four times the size of this other polyp that I would also call a Zoanthid: 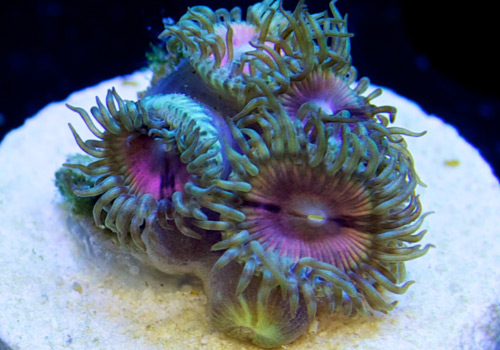 Are they both Zoas?

Up to this point, I never really thought hard about what exactly made one polyp a Paly and another a Zoa. Think for a moment how you would articulate the differences.

I would consider factors such as:

Unfortunately, there are no elegant answers to these questions. Right now, the taxonomy of these corals is a mess. In 1990, there were over 300 different described species, but by 1998, that number was whittled down to about 60 generally accepted species. The classifications largely depend on what criteria the researchers were observing to differentiate the corals.

What are the criteria for identification?

This raises the question, “Who gets to decide what the criteria are?” It’s never just one person. A general consensus is established after a process of extensive peer-review and healthy debate on the topic. That, in a nutshell, is why there is so much chaos when it comes to Zoanthid and Palythoa taxonomy. Corals, in general, do not receive nearly the same attention as other organisms get, so that process of scientific debate is limited.

However, while limited, it is far from non-existent. I encourage anyone interested in identification beyond made-up names to take a look at published scientific journals to get an appreciation of what really goes into coral taxonomy.

What will be immediately clear is that the scientific community looks at these corals differently than we hobbyists do. While we tend to focus on the aesthetic features of a particular polyp, such as color and pattern, researchers look at other features, such as the arrangement of the mesentaries, the shape and size of nematocysts, and the number of septa. Depending on what physical traits researchers decide to focus on, it is possible to arrive at very different evolutionary trees.

For example, if you look at the human genome (which has been completely mapped out), you will find that it is very similar to that of other primates. How similar? Humans and chimps share over 90% of the same DNA. If random segments of DNA were tested over 90% of the time, these tests would indicate humans and chimps are the same species. That last 3 to 5% makes a big difference.

It gets even more complicated once you start considering epigenetics, which studies how much of a genome is expressed. It is entirely possible for genetically identical individuals to have a completely different physical appearance depending on the environment they grew up in.

Take studies of human twins for example. Identical twins that were separated at birth and reunited later in life can look completely different despite having the same DNA. The environment plays a big role in which genes are expressed.

The same issue holds true for Zoanthids and Palythoa when it comes to genetic testing. It is hard to isolate a segment of DNA or RNA that has within it enough diversity to differentiate species. And NOBODY has a good understanding of which genes are being expressed in some Zoanthids or Palythoa and not in others despite having identical DNA.

Conclusion
Long story short, identification is hard. In fact, the whole subject of Zoa and Paly identification is chaotic at best. Keep this in mind the next time you meet someone who claims to know it all about Zoas and Palys (I bet you have already met them).