How to Beat Those Pacific Blue Tang Blues

Its common names include the Pacific blue tang, regal tang, hippo tang, palette surgeonfish, yellow-tail blue tang, and probably several others that presently elude me. Kids know it as the addle-brained Dory from Finding Nemo. Whatever common name you apply to it, though, Paracanthurus hepatus is one gorgeous blue fish!

Morphologically speaking, P. hepatus is highly laterally compressed (flattened from side to side) and possesses a sharp, retractable spine on each side of the caudal peduncle. It lacks the elongated snout common to so many surgeons, giving its face a somewhat more rounded profile.

Color-wise, this surgeon really makes a statement! It’s blue overall with a starkly contrasting bright-yellow tail and a black pattern on its flanks resembling a painter’s palette (hence one of its many common names).

However, despite its widespread familiarity and stunning good looks, P. hepatus is not among the easiest species to keep in aquariums—and it’s most decidedly not an appropriate choice for a youngster’s “Nemo” tank. More experienced hobbyists, on the other hand, can succeed with this species provided no shortcuts are taken in its care. Here’s how:

Start with a healthy specimen 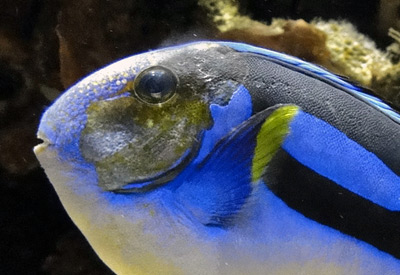 Look for a healthy-looking, robust-bodied (not pinched-in or emaciated-looking) specimen with no obvious signs of disease. P. hepatus seems to be highly susceptible to marine ich (Cryptocaryon irritans) and other ectoparasites as well as head and lateral line erosion (HLLE), so avoid purchasing any specimen that exhibits tell-tale symptoms such as:

We tend to think of tangs as dedicated herbivores, but P. hepatus is one of the exceptions. It does require greens, but its natural diet consists primarily of zooplankton. Thus, its captive menu should include small, meaty foods of marine origin offered several times throughout the day and supplemented with various algae-based foods. If your specimen will also accept a high-quality pellet food, so much the better.

Remember: variety and nutritional balance are definitely the spice of life—and source of good health—for this species so it’s important to avoid falling into lazy feeding habits, such as relying too heavily on one food item. Be sure to mix it up!

P. hepatus can reach approximately a foot in total length, so a large tank is in order. I wouldn’t go any smaller than 125 gallons, and the bigger, the better. Also, make sure the aquascaping provides plenty of open swimming space as well as ample hiding places.

Highly oxygenated, briskly circulating water is a must for P. hepatus. Also, dissolved pollutants must be kept to a bare minimum through vigorous protein skimming and frequent partial water changes.

P. hepatus usually won’t initiate squabbles with tankmates, possible exceptions being conspecifics and closely related surgeons. It can, however, be bullied by more aggressive fishes, so it’s best to select other peaceful species as tankmates.

This species is also generally well-behaved around sessile invertebrates, so it makes an excellent candidate for inclusion in large reef systems.

Join us for the Aquatic Experience in Chicago this weekend