The Many Faces of Mimicry in Marine Fish

In the fish-eat-fish world of the coral reefs, it can sometimes be beneficial to look like something you’re not. This strategy, known as mimicry, is employed by a wide variety of marine fish and other organisms in order to garner some sort of survival edge. Not only is mimicry exhibited by numerous fish species, but it also takes on many different, fascinating forms, such as:

Let’s explore some of these mimicry styles a little further with some examples of species that put them into practice.

On the coral reefs, there are many examples of innocuous marine fish pretending to be much more nasty or noxious than they really are. Take the saddled filefish (Paraluteres prionurus) for instance. This fielfish is almost identical in body shape, coloration, and patterning to the saddled toby (Canthigaster valentini), a puffer species that contains deadly tetrodotoxin in its tissues. Wary predators are apt to leave it alone despite the fact that it’s actually edible. 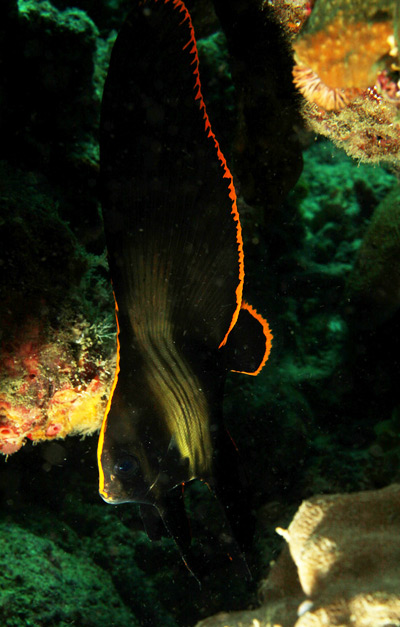 Juvenile pinnate batfish (Platax pinnatus) provide another great example of this form of mimicry. Quite different in appearance from the adults, these little guys are solid black overall with a red margin around the entire outline of the fish—coloration very similar to that of certain toxic or foul-tasting polyclad flatworms.

Yet another interesting case in point is the comet, or marine betta (Calloplesiops altivelis). This species has often been observed concealing its head in a reef crevice, leaving the posterior portion of its body—which is dark brown with white polka dots and a prominent eyespot—visible. A would-be predator could be forgiven for mistaking this portion of the comet for the head of a whitemouth moray eel (Gymnothorax meleagris).

The wolf in sheep’s clothing 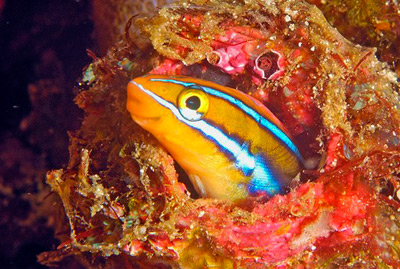 One of the better known examples of this type of mimicry is that exhibited by the bluestriped fangblenny (Plagiotremus rhinorhynchos). This streamlined species, which feeds on the skin, mucus, and scales of other fish, is capable of changing its color to closely match that of the bluestreak cleaner wrasse (Labroides dimidiatus). Fishes duped into trusting this faux cleaner to rid them of ectoparasites get nipped for their trouble.

Nothing to see here!

Camouflage that convinces would-be predators or prey items that the fish is just part of the background is another common form of mimicry seen on the coral reefs. While many species use camouflage to one degree or another, some elevate it to a true art form.

The so-called ghost pipefishes (family Solenostomidae), for example, blend in so expertly with various sessile invertebrates, macroalgae, and seagrasses that they can be difficult for even the most discerning observer to spot. Some are so convincingly camouflaged that they make terrestrial stick insects look like amateurs!

Similarly, many of the scorpaenids (scorpionfishes and stonefishes) and antennariids (frogfishes/anglerfishes) readily “hide in plain sight,” owing to natural growths and cryptic coloration that allow them to blend in seamlessly with substrates on and around the coral reefs. Fishes failing to discern their outline and blundering too close are gulped down with lightening speed. Some scorpaenid species, such as the notorious Synanceia verrucosa and S. horrida, have a highly venomous sting and can even cause human fatalities. Definitely not good choices for the home aquarium! 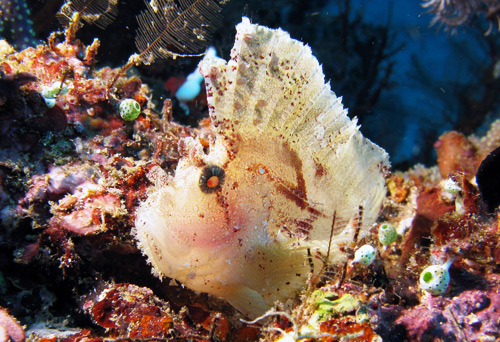 The various frogfishes take camouflage to even greater heights than the scorpaenids. In addition to exhibiting highly cryptic coloration and warty/frilly growths that help them “disappear” against various substrates and sessile invertebrates, they use a modified dorsal spine tipped with a fleshy bait to lure prey items into gulping range—like strange little fisherfolk casting a line.

What mimic interests you most?

Of course, this is only a sampling of the marine fishes that practice some form of mimicry. If you have another example that interests you, please feel free to share it with your fellow salties in the comment section below.

Note to self, play by the rules: Boise Aquarium founders head to Federal prison