The Yasha goby is such a beautiful nouveau iconic reef fish, it’s easy to forget that this fish is not that common or widespread. This fish had its aquaristic debut as recently as 1999 and while they are common in most aquarium markets, there’s still one place where this fish is as rare as the peppermint angelfish.

Australia is blessed with incredibly rich and diverse marine life, and we enjoy their fish and corals very much. However, importing live fish into Australia is mostly a no-go, so when it comes to cleaner shrimp and royal grammas, they need to breed their own.

The Yasha goby is another species which is incredibly rare in Australian waters, and only a handful of fish have ever been collected from this country’s shores. This is why at Reef Secrets Australia a recently collected trio, a pair of fish with its candy colored pistol shrimp, is priced at AU$4,000!

That’s still $3,000 in U.S. dollars or about a thousand bucks a pop for the shrimp and each fish. With its colorful red and white body colors and with that sticker price, they might as well call this fish the peppermint goby. Mr. Rice put it best when he commented that for that much money you could fly to America and eat a whole sandwich of Yasha gobies and still have money left over.

It just goes to show that rarity and demand is relative, to what kind of fish you like and especially to where you live. There’s no doubt that if this species were a lot less common the western reefers would happily pay hundreds of dollars of them like it was some kind of fairy wrasse or fancy angelfish. So the next time you see a Yasha goby at the LFS, or if you have one in your tank right now, be grateful that it only cost you about as much as a nice dinner, and not as much as your entire reef tank. 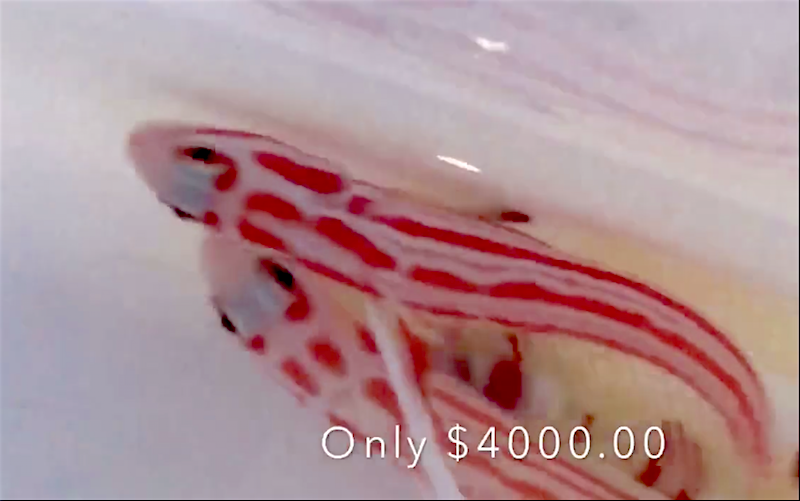 First Look At The Huge Juveniles of Goldenback Triggerfish