The Mushroom Anemone craze is still in full swing and it seems like we haven’t yet reached the end of this collectable rabbit hole. The latest mind-blowing strain to makes an aquaristic debut is this wild ‘Aurora Borealis’ mushroom anemone which recently landed at Sea Dwelling Creatures.

This incredibly colored Discosoma corallimorph has the same pattern as a common beautiful ‘watermelon’ mushroom anemone, but with a different and unbelievable color combination. The Aurora ‘Shroom is a deep red with bright green lines that is unlike anything we’ve ever seen before.

Alas, there was only ONE polyp of the Aurora Jawbreaker Mushroom so this is one exciting strain that should surpass the Eclectus shroom in terms of rarity and value.

Derek Hopkins sent us this one photograph of the only Aurora Jawbreaker polyp that they received. This Shroom is so unbelievable it practically looks fake, but we have no doubts that this Discosoma strain is real, and whoever gets it is going to be one very lucky coral collector. 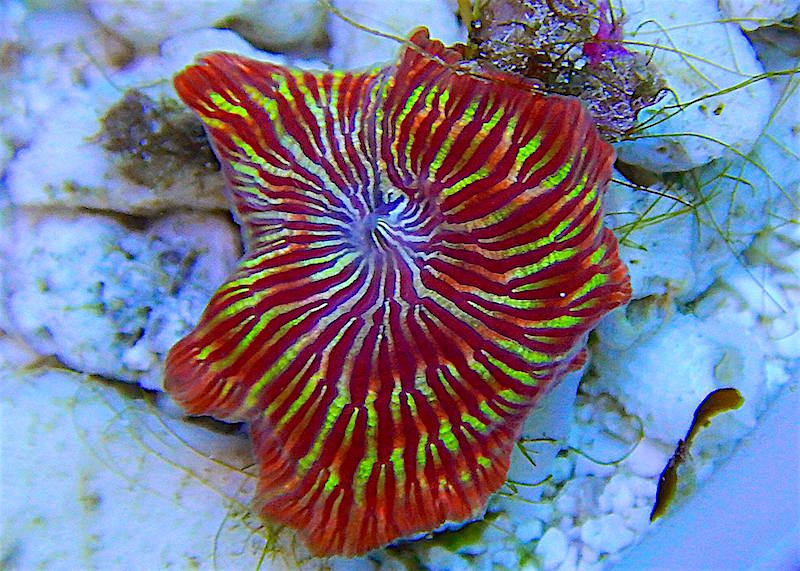 This Hawaii Biotope Aquarium is the Best FOWLR Ever!

ReefStock 2017 Is This Weekend In Denver Colorado!