The Atlantik V4 is Orphek’s fourth generation of their flagship Atlantik Reef Aquarium light. For several years Orphek’s LED fixtures have been a decent choice for reef aquariums, and the Atlantik V4 continues to experiment with a surprisingly diverse array of LED colors.

Most notably, the use of sixteen different LED colors aims to replicate the broadest range of the light spectrum ever seen in a reef light. We’re thrilled about the huge diversity of blue LEDs; 410, 420, 430, 440, 460, 470 and 500nm is a lot of different shades of blue to have within this spectrum range. 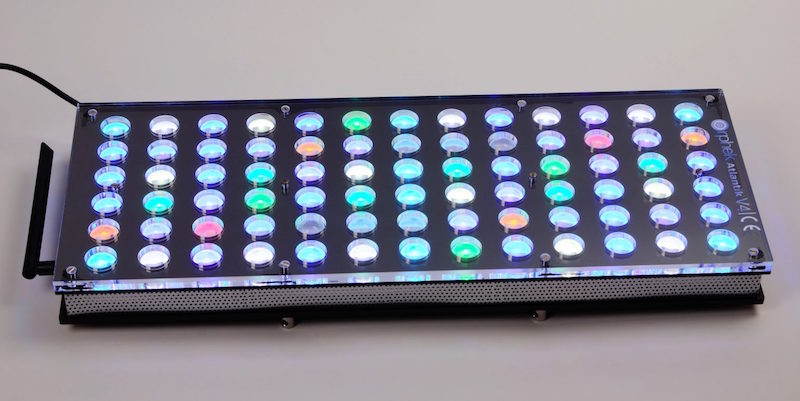 One big advantage that Orphek is touting with the Atlantik V4 is a reduction of red wavelengths which encourage unwanted algae growth, but we would posit that any red light is stimulating to photosynthetic organisms besides corals. Furthermore, the use of 380nm UV and 850nm infrared are virtually useless, and raise red flags about what Orphek is trying to do with the Atlantik V4.

850nm is essentially the same infrared LED found in remote controls, and this part of the spectrum is neither essential (or active) in photosynthesis, and it doesn’t even penetrate water, let alone seawater! Thankfully, the useless 380 & 850nm diodes are relegated to just two each out of 156 total LEDs in the Atlantik V4. [Orphek]