Last month the Canadian government declared the Hecate Strait and Queen Charlotte Sound a Marine Protected Area (MPA). The area is recognized as an important and exceptional marine habitat as the reefs are made up of large colonies of glass sponges estimated to be 9,000 years old.

The reef-building glass sponges found off the coast of British Columbia was thought to have died off 40 million years ago, before the discovery of the living reefs in 1987. The glass sponges are extremely fragile, and up to 50% of the reef was damaged by bottom trawling before fishing closures were put in place in 2002. 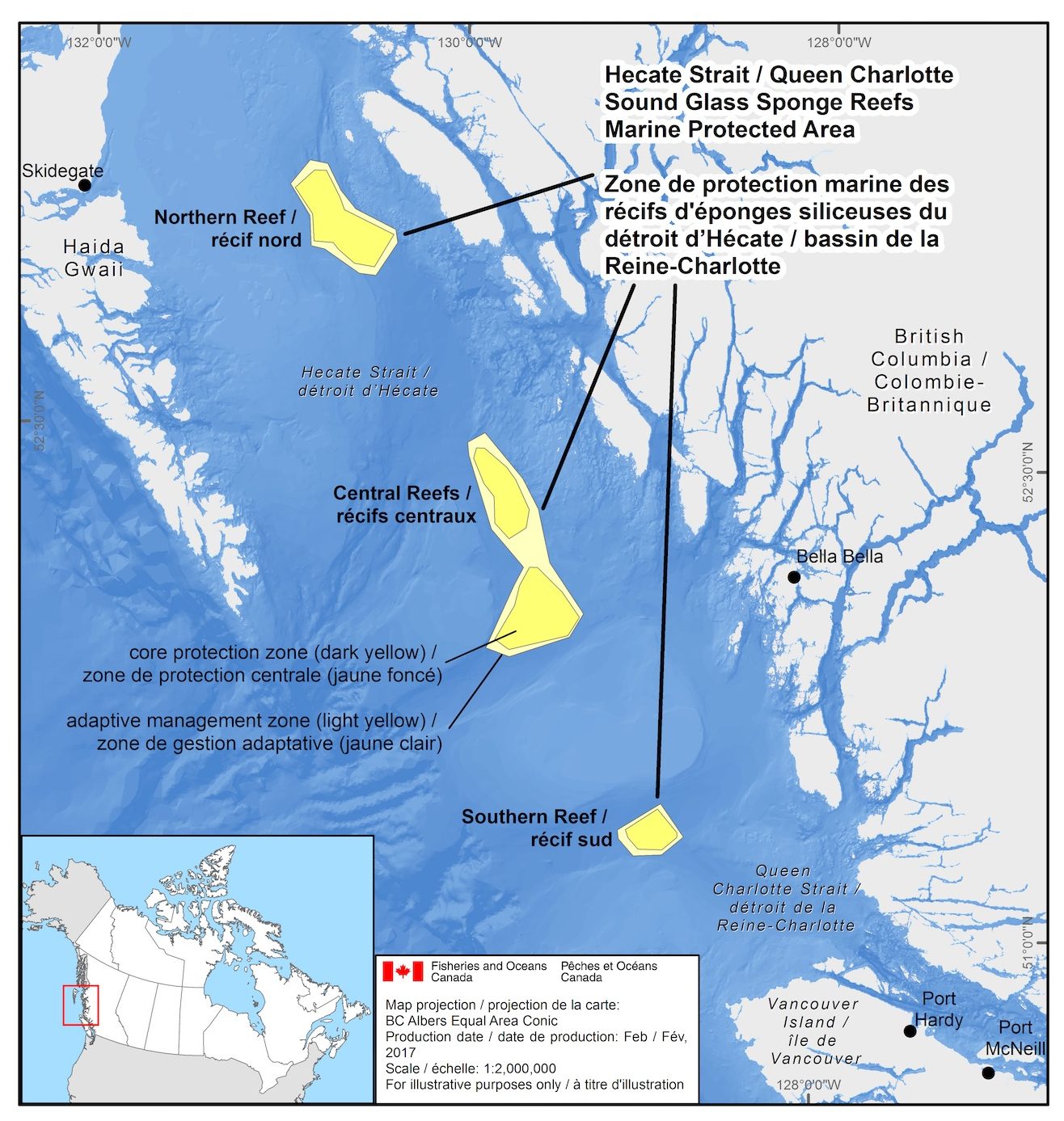 The MPA represents 2,410 km² (1500 mile2) of protected aquatic territory along the Pacific North Coast, southeast of Haida Gwaii. The MPA is composed of three individual areas known as the Northern Reef, the Central Reefs, and the Southern Reef.

The glass sponges found in Canada (Heterochone calyx, Farrea occa, Aphrocallistes vastus) are the only glass sponges that are reef-building. Living sponges grow on top of dead sponge stalks which build up into colossal reef structures known as bioherms. This complex structure provides important habitat for fish, crustaceans, and mollusks, on an otherwise murky flat bottom.

Glass sponges build their fragile skeleton by extracting silica from the water. The sponge then forms the silica into delicate needle-like structures called “spicules”. Glass sponges cleverly fuse the points on the spicules together, much like scaffolding, to create a lattice-like skeleton

Glass sponges are of great valuable to the environment, not only as habitat, but also because they are very efficient at cleaning the water.

Glass sponges are filter feeders and it is estimated that one small reef, a kilometer in length can filter 80,000 liters of water a second! The sponges remove up to 90% of all the bacteria in the water, which is their main food source. This bacteria is excreted as ammonia which will then feed other animals.

Glass sponges are very slow growing and it is estimated that a 1m (3 foot) tall sponge may be 220 years old.

We are very excited to see the glass sponge reef get the protection it deserves. Thanks to the hard work of conservationists, government, indigenous leaders, fishermen, and scientists this one of a kind ecosystem will be preserved for the future.

For more information about the Glass Sponge Reef visit the CPWAS sea of glass website.