Six weeks ago, I purchased the GNC AM366 panel LED for my 45cm SPS cube.  I had been running an AI Hydra 26HD over the tank.  While I was getting good growth in some parts of the tank, I was burning the corals directly under the light and I was dissatisfied with the shadowing of the tank.

Below is a photo of the aquarium under the Hydra on the left. Note the shadowing in the back corner.

I set about researching various lighting options that would deliver the light I wanted more evenly and with better coverage for a cube.  Since my aquarium is 45cm, T5 was not really an option to consider.  The climate of my city (Auckland, New Zealand) does not lend itself to running metal halide either.  I settled on LEDs.  The criteria I used to guide my decision (in order of importance to me) were as follows:

After looking at various options I had narrowed my choice down to a few options:  the Triton LANI LED, the Onescape Nextone or the Sicce/GNC AM366.

For me, the GNC had one of the best SPS track records, especially in Italy.  I preferred its aesthetic over the other lights, and it seemed to match most of my above criteria.  I had spent several days looking for threads on Italian forums using this light and translating the pages.  The reviews had been all positive and the tanks looked amazing (to me) under this light.

The AM366 light itself consists of 210 diodes, consuming just 60W of power.  There are 196 white LEDs (12,000-14,000 Kelvin) and 14 446nm blue LEDs.  The reason for so many white LEDs is for energy efficiency.  Typical units use 7000K cool-white LEDs and must combine them with 50% blue to obtain the desired Kelvin temperature.  Blue LEDs use more power.  The GNC’s use of these higher-Kelvin whites gives the maximum lumen output with minimum electrical consumption at the desired overall color temperature. 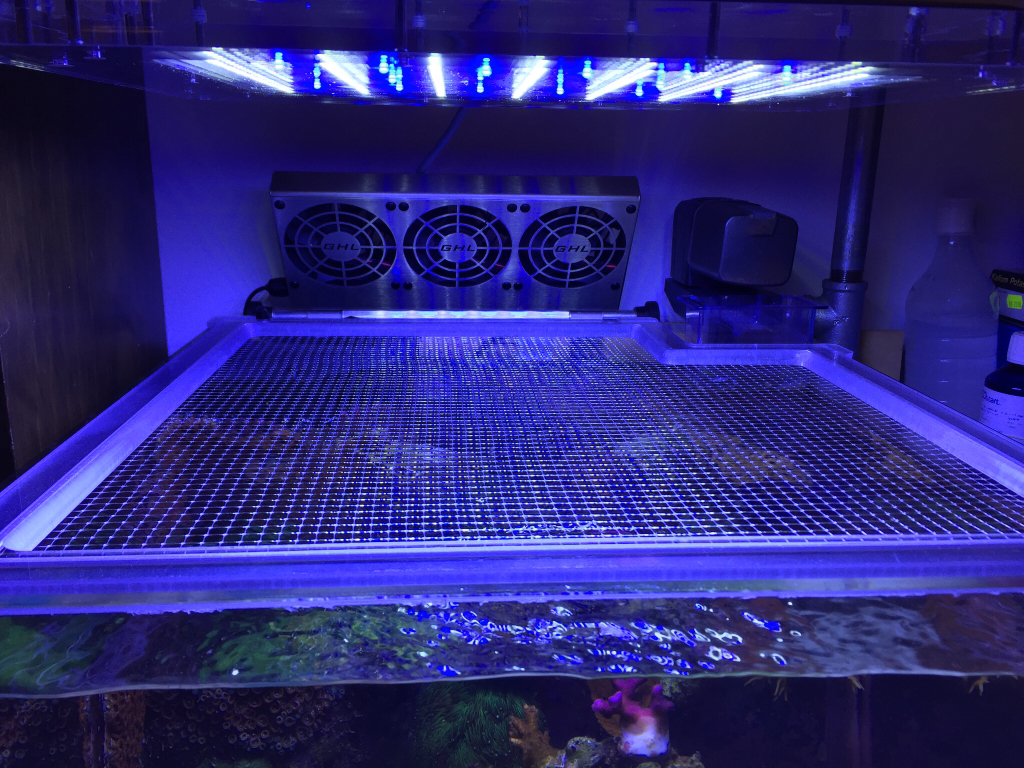 The overlapping light field produces enormous PAR despite its low wattage, with ~200 PAR measured on the sand bed, 40cm under water, with the light hung 20cm above the water line.  I have found the AM366 perfect for my 45cm cube.  If keeping LPS, this light would easily work over a 60cm cube too.

When comparing the GNC with other units, some may claim a higher efficiency based upon lumen output per watt of electricity consumed.  However, the relationship between power consumption and lumen output for LEDs is non-linear.  Higher-wattage LEDs are less efficient, not more so.

As the wattage absorbed increases, lumen output does not increase proportionately.  For example, at one watt the output might be 100 lumens, but at 2 watts the output will only increase to 170 lumens, not 200 as might be expected.  Because the white LEDs are run at their nominal wattage of just 0.179W, their lifespan is greatly increased.  This helps to explain how the light can have a 5-year warranty.

The high number of LEDs also ensures a diffuse light.  There are no lenses.  This helps to minimize shadowing and hotspots.

The dimensions of the light are 366mm x 286mm x 40mm.  The light weighs a hefty 4.4KG due to the solid laser-cut aluminum heatsink.  This means the light is passively cooled and therefore silent in its operation.  The Hydra was quiet when its fan was working, but this was an area of concern for me – the fan is the weakest link: if it were to fail, the LEDs would then likely either reduce their intensity or fail.

The acrylic panel beside looking nice (to my eyes) also acts as an insulator and directs the LEDs’ heat into the heatsink instead of the aquarium’s water.

The whole unit is IP65 rated, including the power cord attachment.  This gives me peace of mind when working around the tank and in the case of accidental splashes.

The power cord is also a gray color, which is less visible than traditional black.  In addition, the power cord can be connected to the light to hang either parallel or perpendicular to the light.  This may be useful for me if I decide to upgrade my tank size in future, as the lights are very modular, and larger AM466 and AM650 both share at least two common dimensions with the AM366, so adding a unit of any size to my existing fixture would still look sleek.

My photoperiod is sunrise at 10am, full power from 11am until 8pm and then a one-hour ramp down, so 9 hours at full power and 11 hours total.  One of the criteria noted above that is important to me was ease of use.  In this respect, the GNC excels.  Its lack of controllability is not a huge issue for me.  Sure, perhaps some more blue spectrum would be nice at night, or some photorespiration peaks and troughs during the day to simulate cloud cover, but my first concern is my corals’ health and growth:  the constant desire and ability to keep tweaking of the spectrum and intensity can be detrimental.  Set and forget has been good for me.  Some people may not like this aspect, though.

The light does come with a basic controller on a separate power supply to regulate the sunrise/sunset of the light.  The reason this is not integrated into the light is that is keeps the fixture slim and it can be replaced/upgraded in future.  Indeed GNC has released updated controllers that do allow the blue:white ratio to be tuned.  Basically, this controller switch works almost like a solenoid valve.  I have mine set up  as follows:

If there is a power cut and both power supplies lose power and have power restored at the same time, the light performs a quick 3-minute sunrise.

If you choose to run the light without the controller, the light will always do the 3-minute sunrise, which would be an even simpler solution.

Some PAR measurements and a gauge on performance

I hung the light 8″ above the waterline of my reef.  Below is an image of my aquarium with the PAR readings from a Seneye reef monitor superimposed.  The readings are based on whichever coral is closest to the figures.  The illumination is very even and the clam is receiving adequate light, visibly laying down fresh shell.  As a test, I also place a

As a test, I also place a frag of Montipora digitata on the sand bed.  Within two weeks, its growth has been tremendous.  An even 200 PAR across the whole sand bed for a 60W light is very impressive to me.  The upper reaches of the tank are receiving in the 250-350 PAR range.  The Seneye’s PUR reading was 75%.  Of course, some of this light may in part be due to the reflective nature of small cube of glass, but it is nonetheless impressive to me. 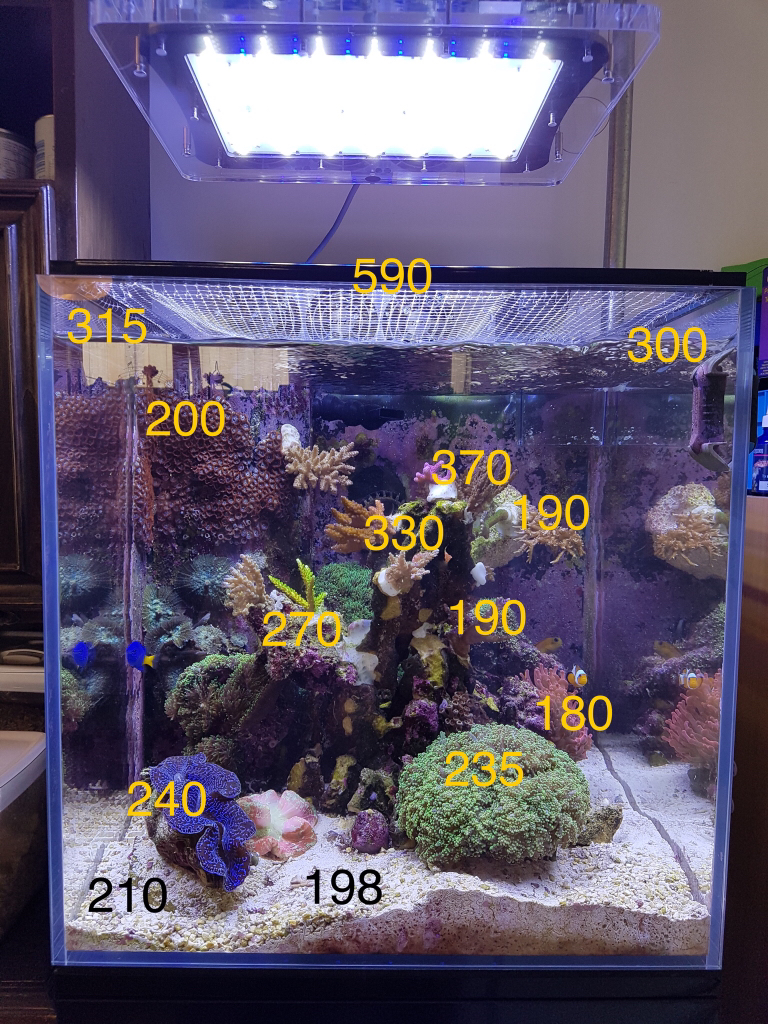 In addition, since adding this light to my aquarium, growth has continued to increase, with alkalinity consumption increasing from 0.8dKH/day to 1.4dKH/day in the space of a month.  Surely a sign that the light is doing its job!

Polyp extension has been extraordinary with this light over my reef, and all corals have responded well.  The fish colouration appears more natural to me, and taking photographs seems to be easier too.

The light does not produce as many glitter lines (but still produces some) and is more akin to a T5-lit tank in that respect.  There is absolutely zero ‘disco-ball effect’.

The light is simple to use, elegant and grows corals very well.

I am looking to do an update on this review in six months‘ time to compare the growth and see if the corals have continued to respond well.

GNC/SICCE did not pay me for this review, and my views are my own.

Hugo lives in New Zealand and has kept tropical fish for over 15 years and reef aquaria for five.  He also has a conjoint degree in marine science and law from The University of Auckland.