As insular as the reef aquarium hobby can be, it’s easy to think that the lives of our corals begins at the LFS and ends in our reef tanks, but the real story of corals happens on natural coral reefs, thousands of miles from us. In an effort to tell the whole story of corals in all their forms, we’re fortunate to travel to some of the most iconic coral reef regions of the world. 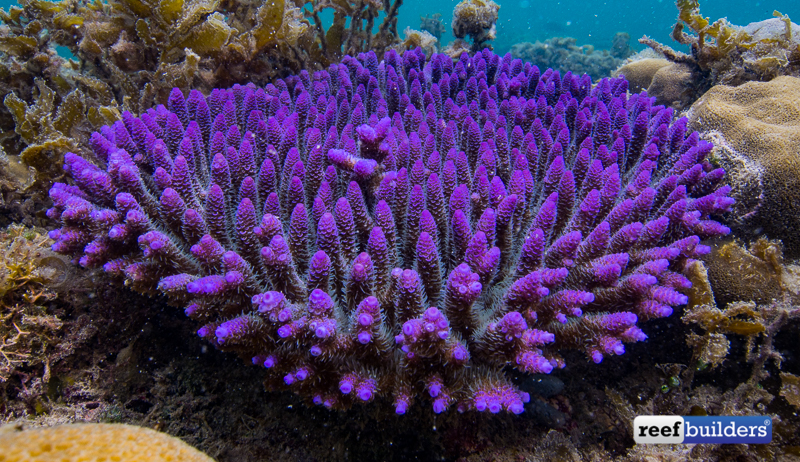 We’ve all seen Acropora millepora in a whole rainbow of colors, everything from pink to blue to green, orange, salmon and every shade in between. But I was really taken aback when I came across a truly purple Milli – since it was in shallow water illuminated with sunlight there’s no ambiguity about whether it was blue or pink, I’ve seen those before in the wild, but there’s no doubt this was a Purple Milli with a capital P.

A little more pedestrian but still very nice was an abundance of killer blue Acropora humilis and purple tipped Acropora lokani. The corn-cob branches of A. humilis can be seen throughout the Indian and Pacific Oceans but as many times as I’ve seen this coral, I still have to stop and admire a nice chunky colony growing in strong flow and super bright lighting – it always puts our low energy reef tanks in perspective.

Also when I told the locals about how many Acropora lokani were sighted on deeper reefs beginning around 60 feet, apparently everyone in the fisheries department knew this guy Paul Lokan after whom this coral is named. So it was very neat to spend some time with this gorgeous deepwater Acropora in region from which it was discovered.

Perhaps one the reasons the purple Acros of Papua New Guinea made such an impression on me is because literally the first coral that I focused in on during the first dive was this intense blueish purple species. It looks like the same shade as a purple Acropora austera but it turned out to be locally abundant, and always with a pillow shape that Austera doesn’t usually develop.

But by far the crowning ‘discovery’ of the PNG coral survey is this gorgeous scaley branched acros with a dream combination of colors. Pink branches, blue tips, and a yellow edge to every scale makes the ‘Unicorn Acro’ one that I really hope will make its way to the aquarium hobby.

There was actually many colonies with this motif, but this was the brightest and healthiest of them all, and it was an incredible coral to see both from a few feet, and a few inches away. With all the crazy corals that we get to see at the best reef shows, it’s easy to start thinking we’ve seen everything – but all it takes is one trip to a unique ecoregion to come across some corals we have yet to enjoy in active aquarium culture.

A Rare Encounter With The ''Pink Meanie" Jellyfish