Hotspot Of Bicolored Plate Corals Has A Very Cool Explanation

Humans have a special affinity for living things that are bicolored, and we especially love it when we see striking two-tone coloration in corals. For some of these specimens, genetics are at work, and for others we collectively believe that some form of chimerism is being formed, where two larvae from the same species settle onto the same spot and merge into one coral.

We’ve seen plenty of bicolored plate and disc corals before, but a recent motherlode demonstrated by SA Coralfarm in Bali has us scratching our heads. You see, we tend to think of coral chimeras as being a somewhat rare occurrence, and this is true for many of the LPS but with disc corals, there are some different biological mechanics at play.

The plate and disc corals we are familiar with as free living saucers are just the second life stage of this intriguing group of corals. As we learned in a recent study of the fascinating life stages of Truncatoflabellum, there are some coral groups that have their life cycles divided strictly by asexual or sexual reproduction.

That is to say, the first life stage of Fungiids including Fungia, Heliofungia, and Cycloseris, begins as an attached polyp called and anthocauli. These attached polyps can only reproduce asexually, budding off free living polyps and then regrowing them and repeating the process several times. 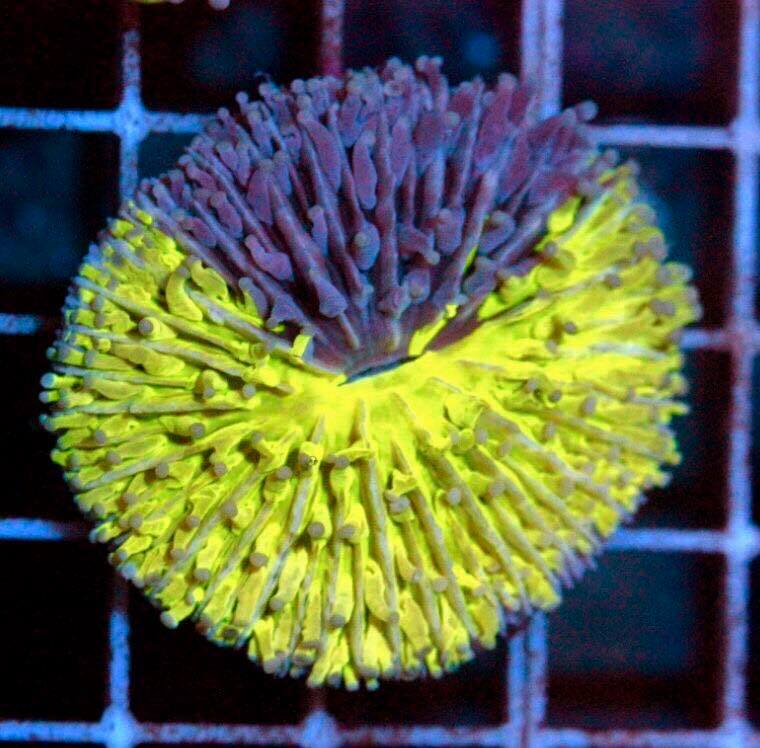 Furthermore, long tentacle plates are known to occur at super high densities, sometimes completely dominating certain habitats with some records of lagoons in Palau being filled with just Heliofungia actiniformis, the long tentacle plate coral. So when you crowd these corals into certain environments chimeras are more likely to occur – and, the chimeras of attached anthocauli can grow more than one free living chimera polyp over their lifetime.

These two details of plate corals offer some possible explanation for why bicolored plate corals seem to have been found in some concentration, and it just sheds even more light on why corals are so darn interesting. Big thanks to Calvin Krog of SA Coralfarm for sharing the catalog of his plate coral chimeras.

How To Do Coral Frags Right