We get it, you’re busy and don’t have time to sit around sifting through books or perusing our Guide to Caribbean Corals. So we made this quick guide to Mound & Boulder corals so you can easily identify Caribbean species at a glance.
There are a total of 5 quick guides for Branching, Large Polyp, Plating, and Meandering corals. Follow us on Facebook to stay up to date with all our coralicious content.
In this quick guide, we give you a few tip to identify each genus or type of coral. If you want to learn more about each species there is a link describing each in more detail.

Star coral may not be bright and colorful, but it is an important reef-building species that dominates Caribbean reefs. Star coral forms rather large mounds and boulders averaging a meter in diameter, however without competition there is no limit to its growth.
We found a giant colony of mountainous star coral while diving in Honduras, a whopping 7 meter (23 feet) wide and 4 meters (13 feet) high, estimated to be over 500 years old.
1. Orbicella annularis – Pillar Star Coral
Orbicella annularis is one of three species of Orbicella coral found in the Caribbean. This species of Orbicella grows into clusters of long thick columns with large domed shaped tops.
The difference between the three species is the shape of the colony and the surface texture of the coral. If you are learning to identify Orbicella first focus on learning to identify the corallites and polyp shape of the genus, then try identifying each species. 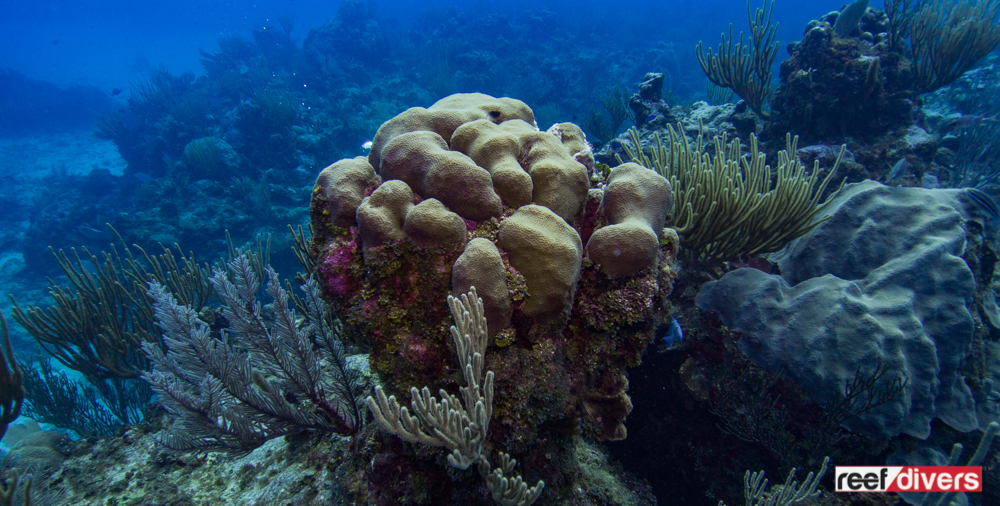 2. Orbicella franski – Rough Star Coral
Orbicella franksi is one of three species of Orbicella coral found in the Caribbean. This species of Orbicella grows into large plates covered in irregularly shaped nodules. The corallites are conical and irregular in shape and size, 2.5-4 mm diameter and formed by extratentacular budding. The color is orange-brown, greenish-brown or greyish-brown, but the extremities of the lumps are often pale or white. 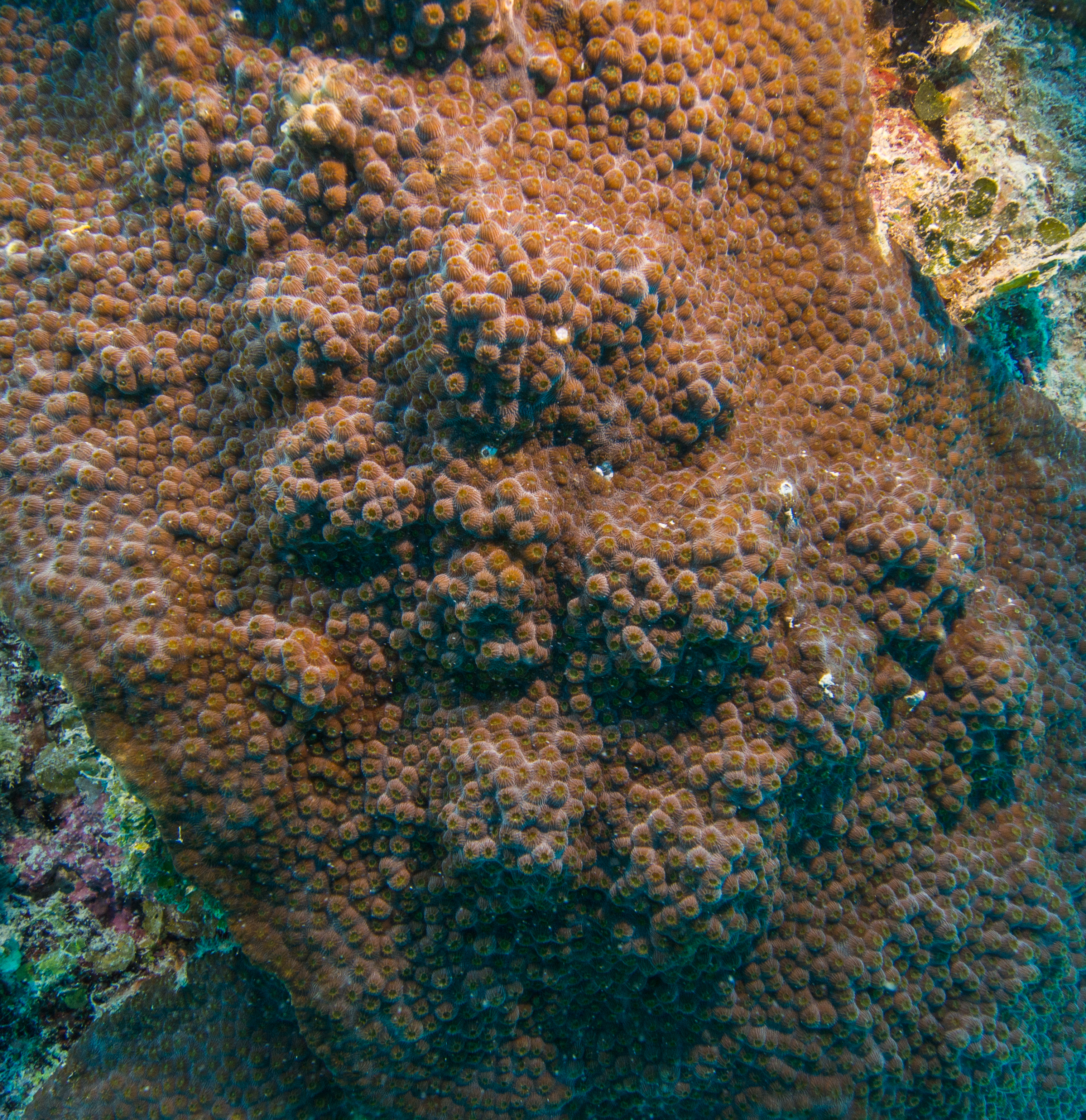 Montastrea cavernosa is a colonial coral with bulbous corallites. Montastrea is easy to spot on most Caribbean reefs making it a good place to start when learning to identify corals. This coral can be a solid color or have contrasting colored corallites, which makes it exciting to find on a dive.
Montastrea grows into massive colonies which can be flat or domed shape. This is a hardy coral which can grow in most reef habitats. You can find colonies ofMontastrea in the shallowest part of the reef and it is possible to see this coral while snorkeling.
4. Montastrea cavernosa – Great Star Coral

Dichocoenia is an encrusting coral which forms domes or spheres. Some colonies can create curious shapes, and it just depends on what rock or old coral skeleton Dichocoenia is covering.
Dichocoenia has two growth forms a uniform creamy yellow color, while the other has a white rim on the corallite and contrasting yellow colony surface. The jury is still out whether these are two species or just different forms of the same species.
5. Dichocoenia stokesi – Pineapple Coral

Porites astreoides is a lumpy bumpy coral that is hard to miss. Everywhere you dive in the Caribbean you are sure to find this iconic species.
The size and shape of Porites astreoides colonies depend on where the coral is growing. Colonies found in shallow water will tend to be a more dome-shaped, colonies growing in deeper water will having a plating or encrusting form.
6. Porites asteroides – Mustard Hill Coral 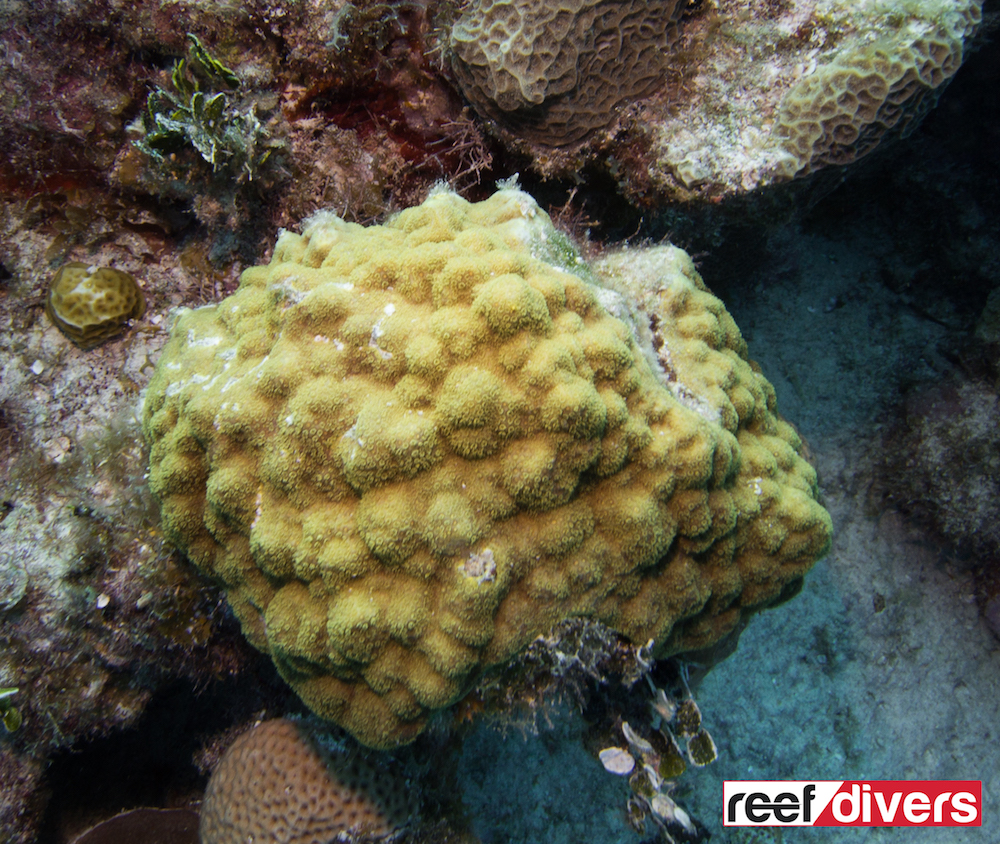 Favia fragum is a small coral around the size of a golf ball. This coral could be mistaken for Dichocoenia, however, Favia will always be a small colony. I have yet to photograph more than one colony, so stay tuned for a full-length article about this species.
7. Favia fragum – Golf Ball Coral

If you are learning to identify Stephanocoenia intersepta chances are you’ve mastered all the basics of coral ID. Stephanocoenia is an uncommon coral which can be easily overlooked or mistaken for other boulder or star corals.
The coral polyps are dark in color and typically extended during the day. When the coral is disturbed the polyps retract and the lighter color coral tissue below is exposed, making the coral appear to blush. You can see this in the photo below. Near the edges of the colony, darker polyps are retracted exposing the pale white tissue.
8. Stephanocenia intersepta – Blushing Star coral 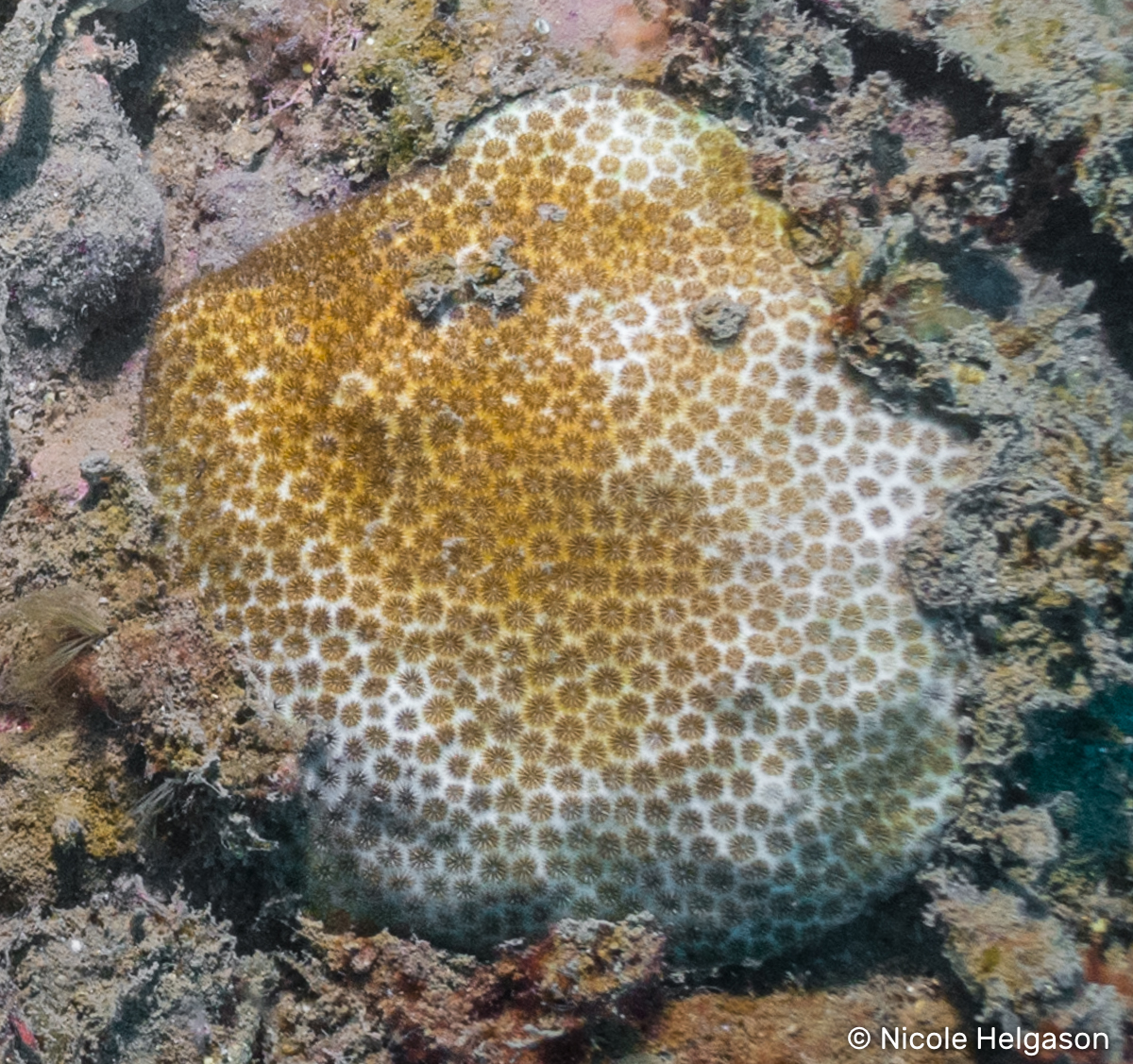 Solenastrea is an uncommon coral although it can be abundant in some habitats. You will find this coral in shallow reef areas, often with sandy bottoms. Solenastrea grows into mounds with distinct round corallites which protrude above the surface of the coral. The color will always be pale yellow to white.
I have not photographed many of these corals, and a full article about the species is coming soon.
9. Solenastrea bournoni – Smooth Star Coral 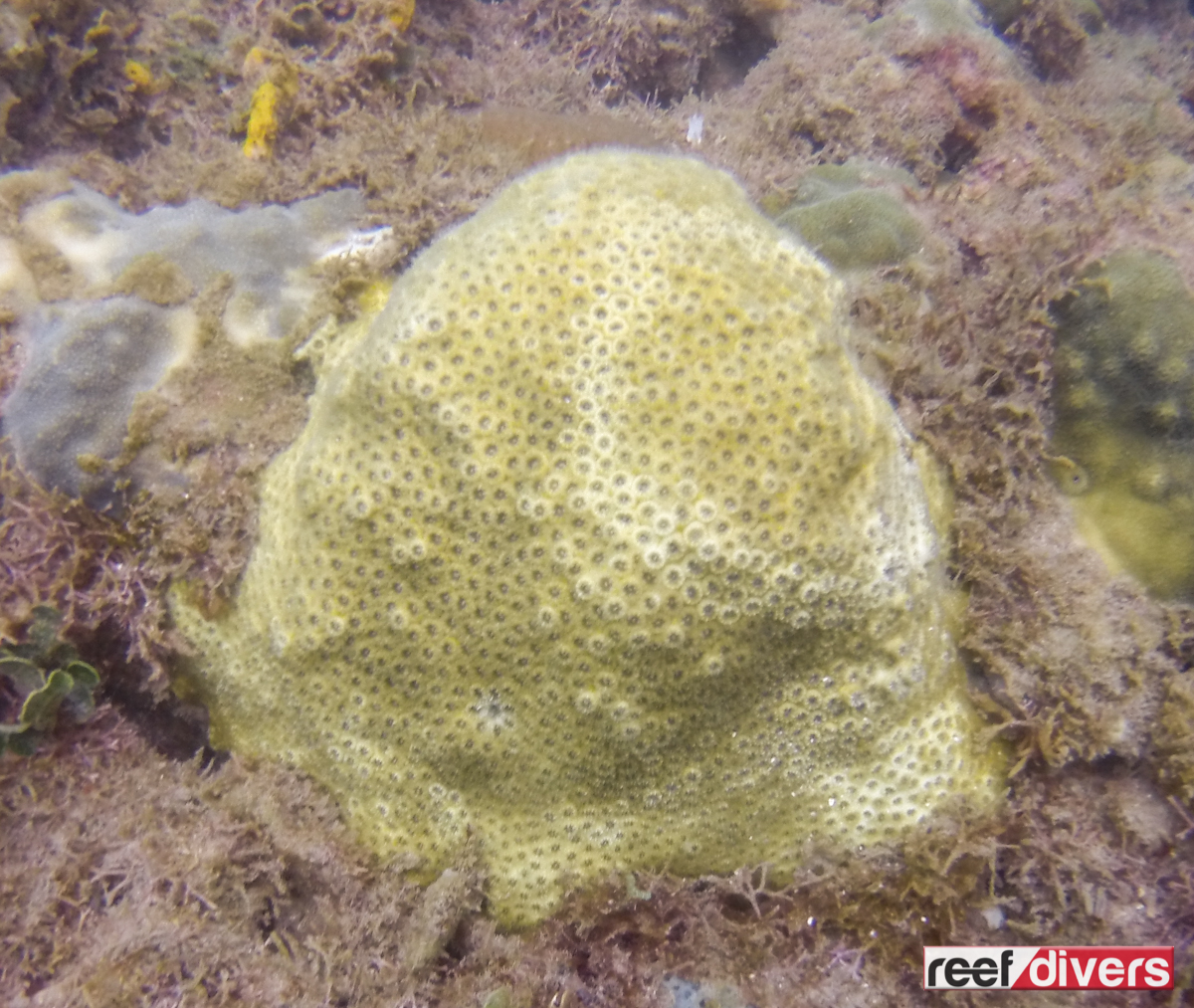 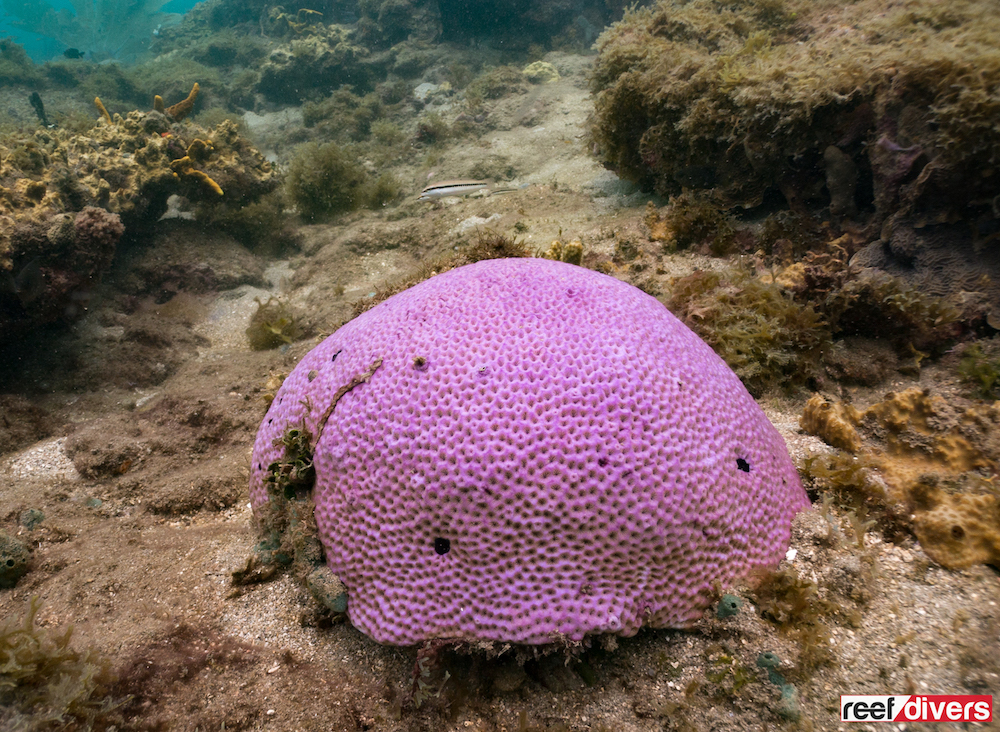 Siderastrea radians is the smaller cousin of S. siderea. These two corals can be difficult to tell apart as they are very similar in appearance, however colony size is a sure giveaway. Siderastrea radians is called the lesse starlet coral because it is considerably smaller and colonies are no larger than 30cm in diameter typically much smaller.
You will find this coral exclusively in the shallowest parts of the reef between 1 and 5 meters and the color is often beige or sandy. Another way to distinguish this species is looking at the corallites, as they are wider and deeper than Siderastrea siderea.
11. Siderastrea radians – Lesser Starlet Coral 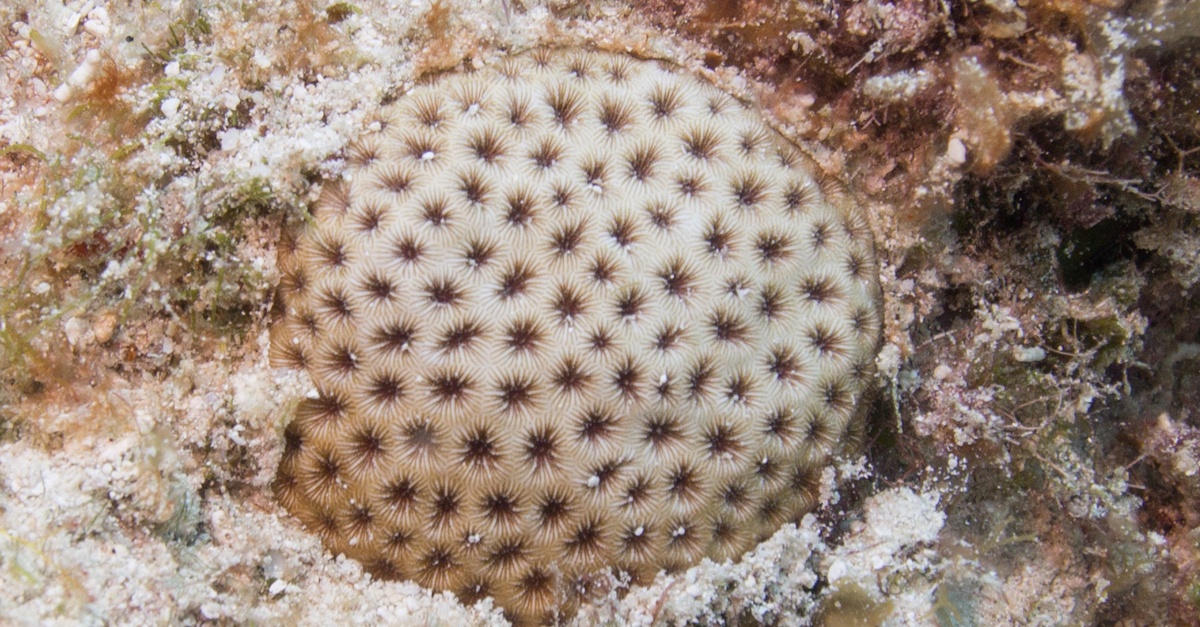 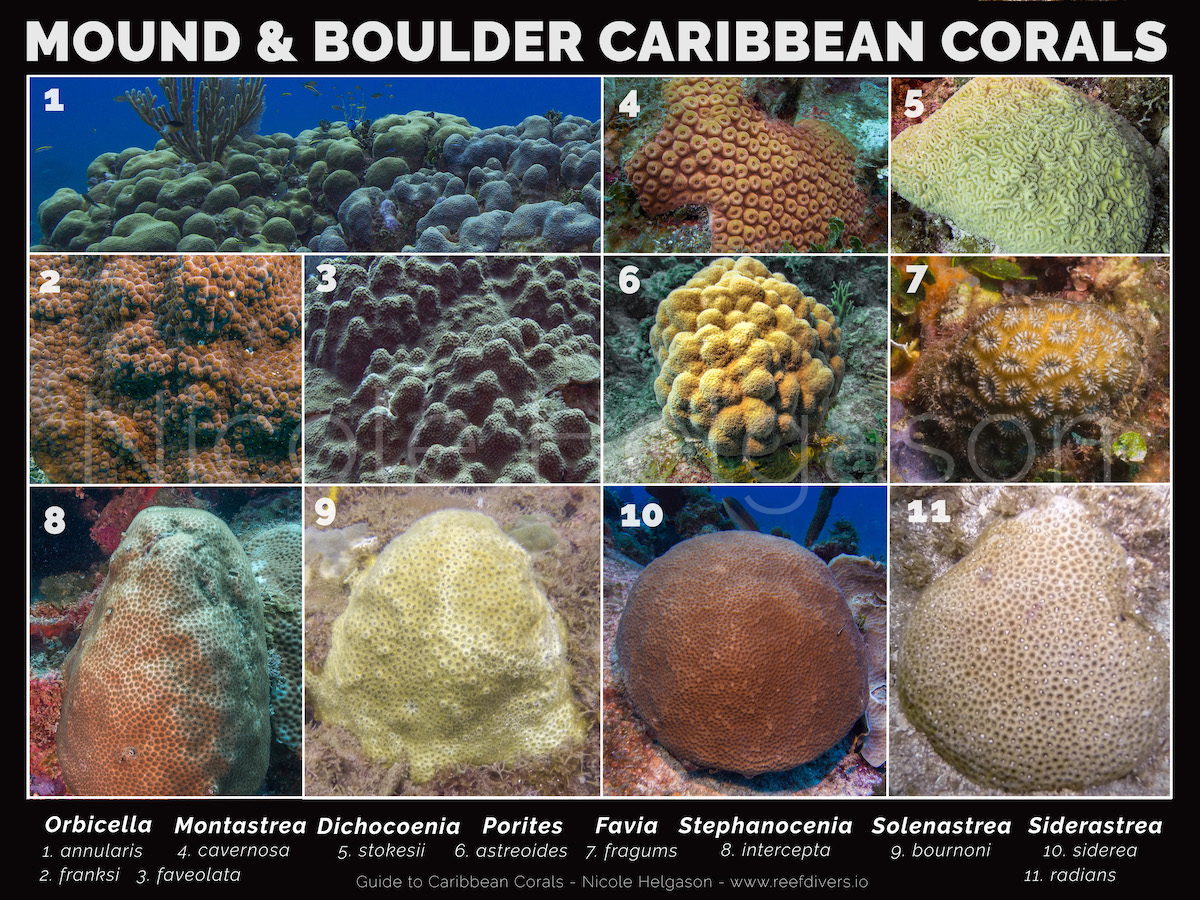