The Black Storm Clownfish may have taken a few moons to be released to the aquarium public but the Mocha Storm is hot on its heels. The hotly anticipated Black Storm is coveted for its wild and crazy stripes, especially across and around the face and now the second Designer Storm clownfish will give Sea & Reef Aquaculture fans another strain to consider for their aquarium.

Like the Black Storm the Mocha Storm has the same wild and unpredictable cow-print pattern to its white ‘barring’, if you can still call it that, but the jet black body color has been replaced by a nice shade of blonde coffee. There’s nothing more bold than the contrast of black and white but if you want a little bit more character to your clownfish spots, the Mocha Storm is where its at. 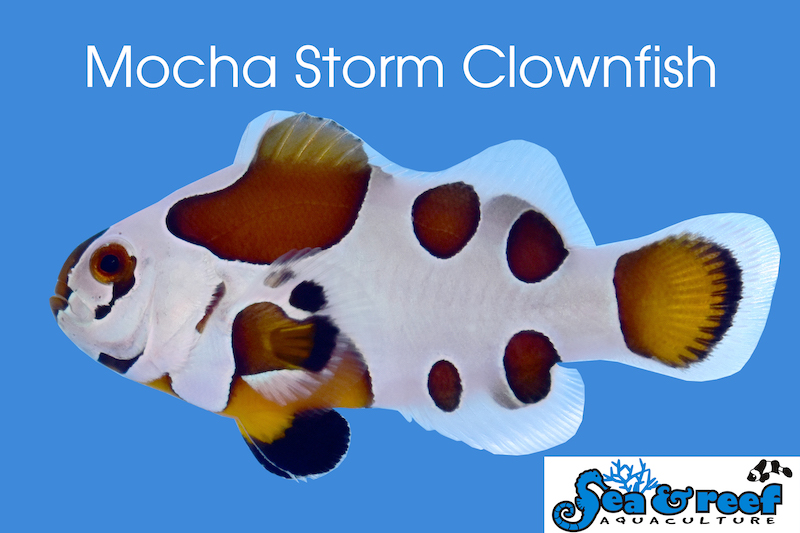 In some parts the Mocha Storm clownfish spots are a medium brown, in other areas it lightens up to almost yellow. But in all areas there’s a gradient of color from the light center of the spots to the black margin which is characteristic of wild clownfish.

The subtle gradient is especially attractive in the pelvic and tail fins which are edged in black and white respectively. Perhaps one of the most exciting things about the Mocha Storm is how it intimates what the Orange Storm Clownfish will look like, if and when it actually gets released later this year.

Sea & Reef is just ramping up its production of the Mocha Storm but interested aquarists should start seeing individual specimens appearing in their online WYSIWYG gallery in the coming days.

Koral MD From Brightwell Aquatics in Regular and Professional Strength