Fukui point is easily one of the best coral dives in the Bunaken National Park. The shallow areas are covered in huge colonies of branching corals, and the reef slopes have some of the most expansive fields of plating coral we’ve ever seen.
In Part 1 of this article, we wrote about the plating corals covering the side of the reef slopes. In this article Part 2, we will talk about the juicy branching Acropora corals covering the top of the shallow reef, a site that is sure to impress even the most seasoned of divers. 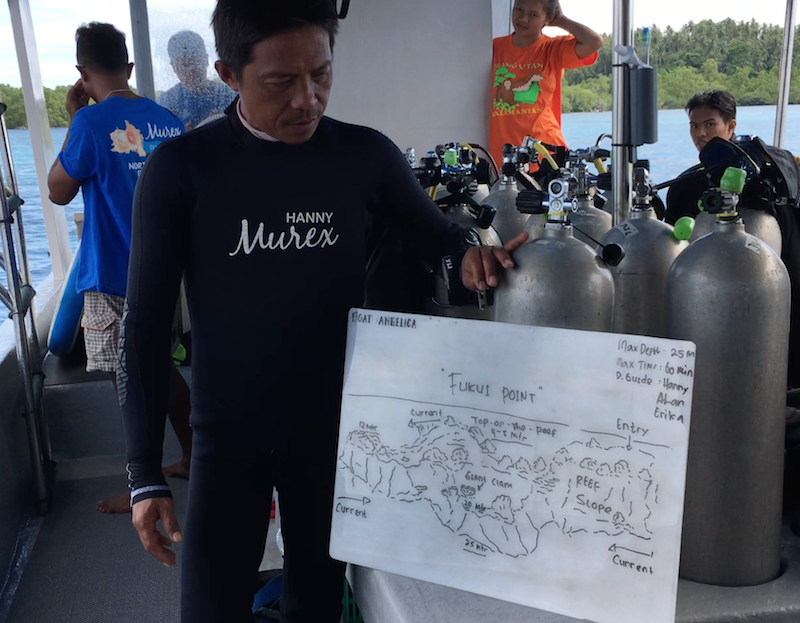 When you drop into Fukui point you are met with an expansive field of branching corals in pastel pinks, greens, and vibrant blue. The branching Acropora corals start right below the surface, around 2-5m deep depending on the tides. Large schools of fish swim about taking shelter beneath dive boats, schooling above reefs, or darting past divers. 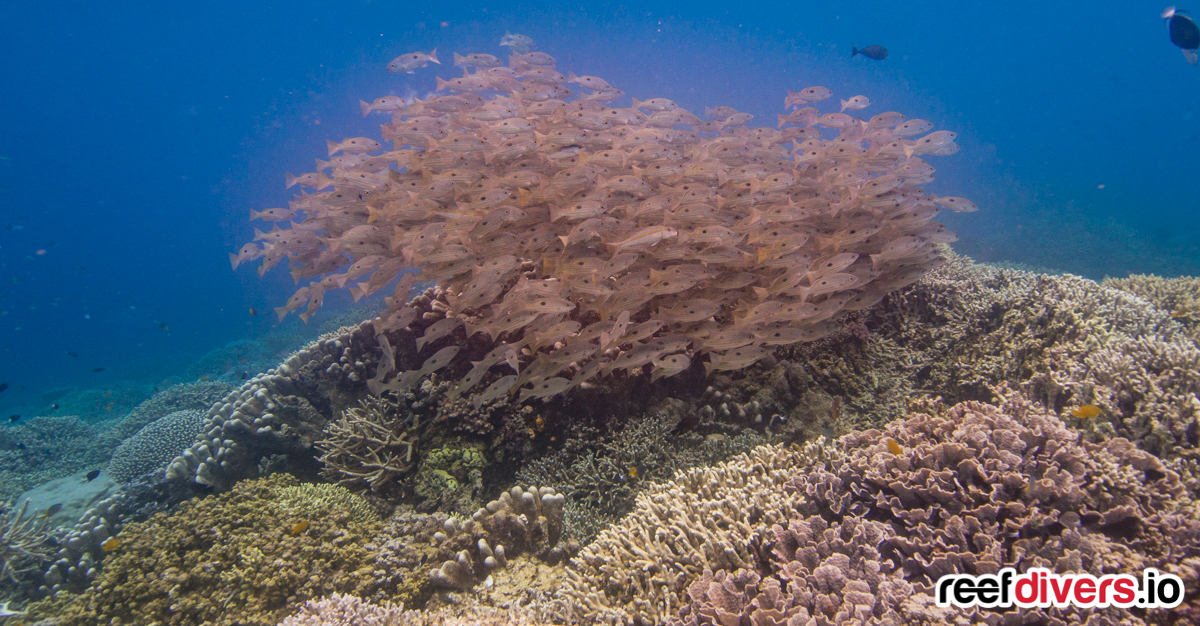 If you’re just learning to identify corals, Acropora is the best place to start. All corals in the Acropora genus are easy to identify as they have a distinct corallite, called the axial corallite found at the tip of each branch.
For a quick coral biology refresh, the corallite is what each coral polyp builds for protection. They are either tubular, cup-shaped, or round depression in the coral skeleton where the polyp can take shelter if it senses any danger.
All hard coral species have corallites, but Acropora corals are the only genus to have one larger, distinct, tubular corallite on the tip of each branch. To identify Acropora just look for the axial corallite! If the branch has uniform corallite sizes or multiple corallites on the branch tip you can be cross Acropora off your list.

It is possible to find other species of branching coral in Fukui but Acropora is the most prolific. It’s quite easy to spend an entire hours dive swimming above the shallow reef admiring these complex habitats.
Coral reefs are home to over 25% of all fish species, and large stands of branching Acropora like these make up the bulk of habitat space for all sorts of marine life. Smaller fish, eels, and invertebrates live amongst the branches. There are even some large coral bommies in Fukui which create habitat for baby white tip sharks. 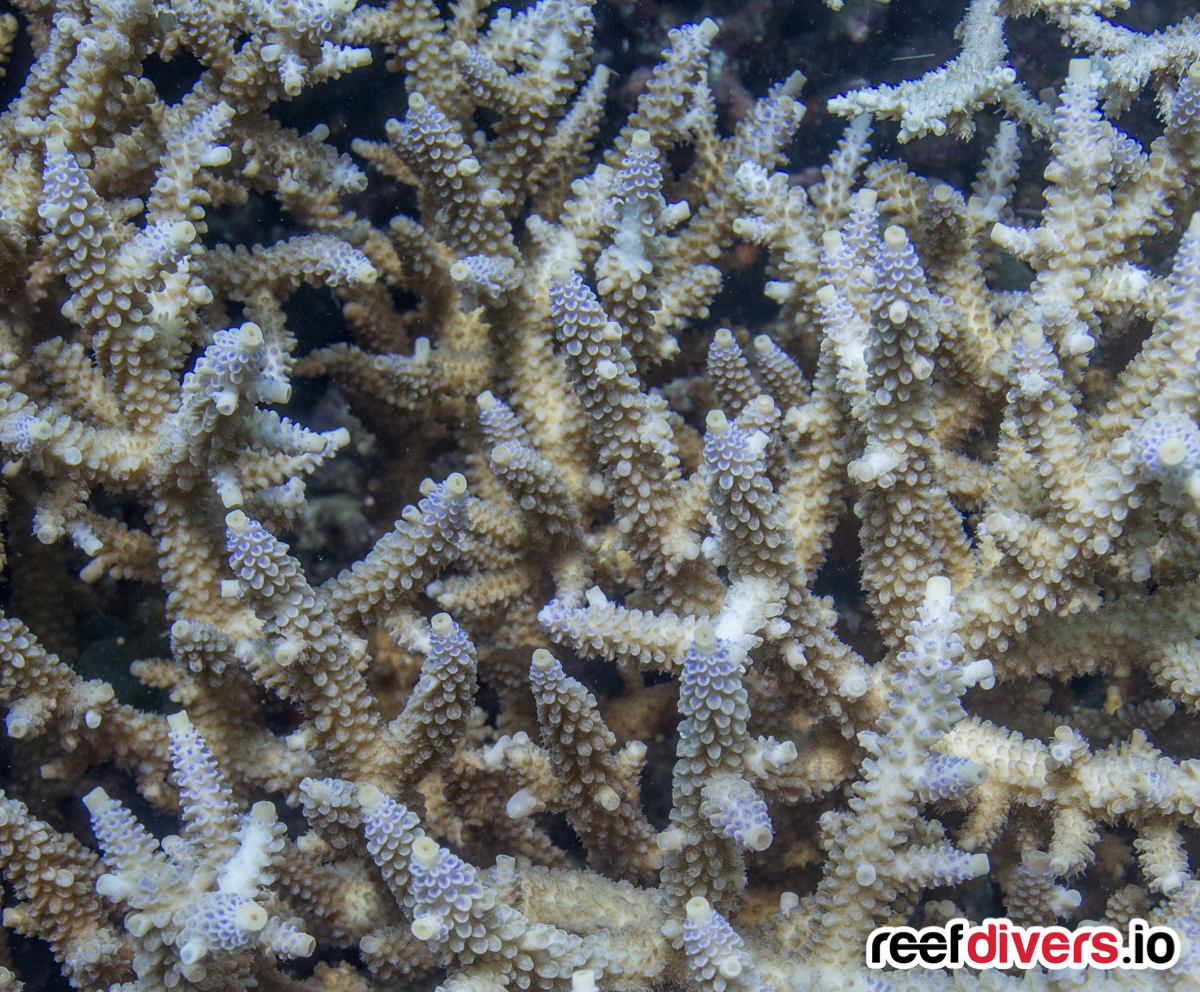 It’s hard to pick a favorite coral on this dive, but if you’re really in for a scavenger hunt, we found a few colonies of otherwise drab, creamy Acropora with the brightest blue polyps imaginable.
Fukui Point dive site is on the corner of Bunaken Island. The top of the reef is shaped like a V,  and the Acropora colonies are located on the edges with rubble patch in the center. We found this blue tipped Acorpora on the east side of the V. Let the games begin!! If you find this colony and photograph it make sure to tag @reefdivers.io.

While the Acropora corals are the main event at Fukui point there are still a few bonus corals we had to mention in this article. At the very far southern end of the V-shaped point you will find a cluster of Turbinaria paltata.
These corals are greyish purple with large extended polyps averaging 6 millimeters in diameter. The Turbinaria corals form thick overlapping plates on the side and upward stretching columns in the center of the colony. If you swim past the first cluster you will encounter a field of a few dozen colonies each measuring at least 2 meters in diameter.

There is no shortage of surprises at Fukui point, and rolollith corals are a quirky feature easy to overlook. While the edges of the coral point are dominated by branching corals, the center rubble patch is laying the foundation for a new coral reef.
Why this rubble patch exists in the first place? Some say it was bombing, boat damage, perhaps even storm damage, but if you look closely you can see the reef is far from a barren rubble field. Instead, it is rebuilding itself with hardy coral rololliths.
Rololliths, also called Coralliths, are hardy species such as Porites and Astreopora, which are free living polyps that have settle on and colonized reef rubble. The coral then rolls around with the currents growing in size until they are big enough to stay put.

The rolling corals usually make their way to the edge of the natural reef growing into large boulders the size of a basketball. Once they reach this size they are big enough to stay in place and slowly the reef stars to reclaim the rubble area.
Once these mini boulders are established and stabilizing the sediment more delicate branching corals can settle in place. These intrepid corals lay the foundation for new reefs, in an otherwise inhospitable area.

Have you been diving at Fukui point? Let us know in the comments below which corals you like most and what is your favorite dive site in Northern Sulawesi so we can be sure to give you a coral spotting checklist for your next dive!