Snapshots of My Own Personal Reef and Planted Tanks

If there’s one thing that you should know about me by now, it’s that I really really love aquariums, especially my own tanks. I miss them when I’m traveling, even if for just a few days. There’s a webcam setup to keep an eye on most of them, and I have a habit of taking some simple snapshots of them on my way out the door.

I’m just about to head to Orlando for Reefapalooza, so I took a small spread of pictures of each tank. Since I plan on meeting up with many readers and viewers at the big show, I thought it’d be fair to preemptively share the snapshots so you can get a real, unfiltered look at my personal aquariums which range from tiny little nature bowls, all the way to a ‘hot rod’ high energy SPS reef tank. These pictures were taken very hastily with no touch up, only cropping and resizing, and they are pretty true to life. 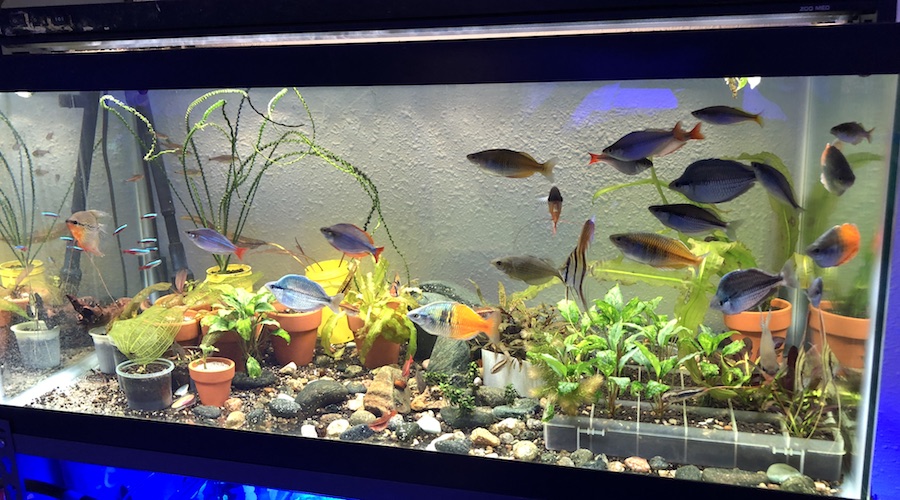 40 Breeder Rainbowfish Tank – this tank is mostly about keeping a weird assortment of freshwater fishes. There’s some really nice rainbows in here, including wild type Boesmani, Lake Kamaka ‘bows, and a few assorted others.

I recently picked up two pairs of small wild altum angelfish and boy I can wait to see how these guys grow up – they’ll deserve a tank of their own. The plant assortment is equally eclectic, consisting mostly of bulb plants such as Aponogeton, Crinum, and a few sword plants and crypts. The foliage varies depending on which species of Apon I have to put in hibernation and how recently I’ve replanted them. This tank uses a canister filter and the new ZooMed AquaEffects LED Strips. 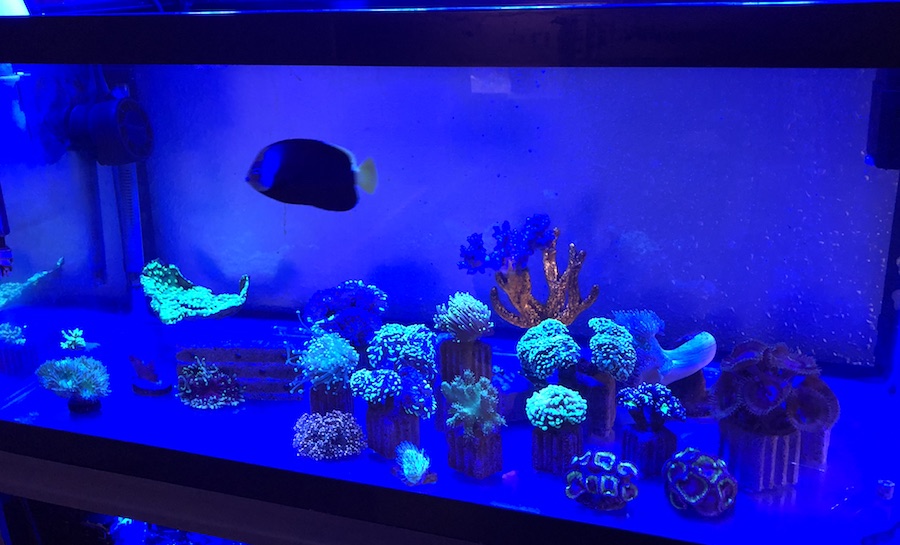 40 Breeder Angelfish & Coral – This tank started out as purely a quarantine and then dedicated fish tank since the original inhabitants were only angelfish. I decided to roll the dice and start introducing overflow corals from other tanks, starting out with weedy species like a fast growing Echinopora, loads of Euphyllia, and my surprisingly large collection of jumbo Palythoa grandis sun polyp colonies.

The angelfish occasionally nip at some fo the corals, but this is mostly out of curiosity and the tissue is always spit out. I swear sometimes if I’m late on the feeding the angelfish will chew a coral in front of me as a reminder to give them some real food, but they never do significant damage. This tank uses a single Tidal power filter, a large air driven skimmer from a glass bottle, a Wavepuck for added flow and the new Maxspect Razr LED light fixture. This tank is still very much in progress and I have plans to drill it and put a new-style sump and filter on it. 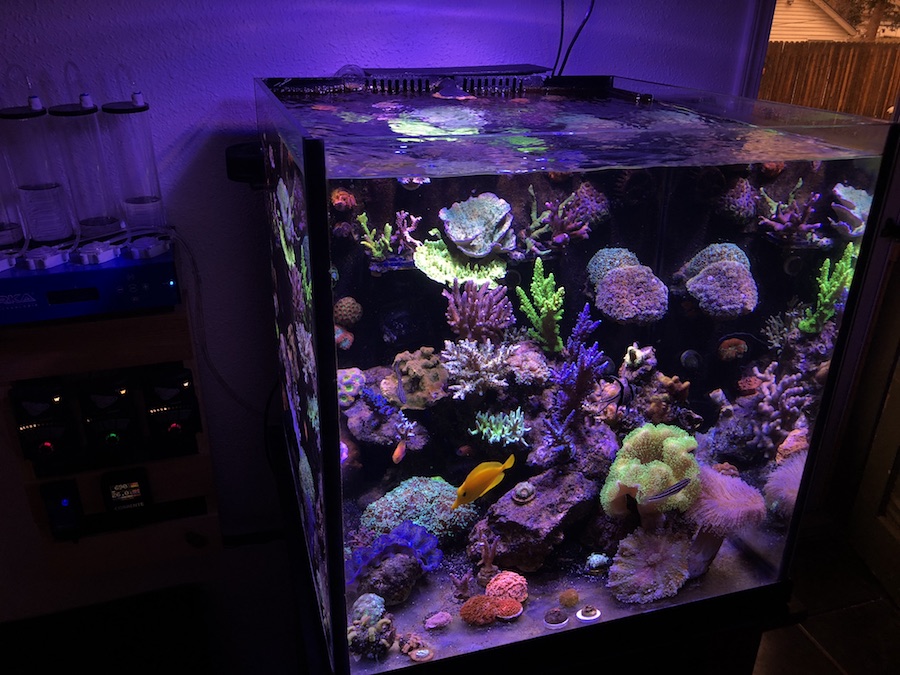 The Main Reef – This reef tank has been featured a few times, it’s a 60 gallon 24″ cube that has gravitated towards a very diverse mix of corals, but more and more focused on high energy species like Acros, Anacropora, Montis etc. This tank is impossible to ignore because it’s right there when you walk into my tiny house and I love that it is viewable from all three sides.

The tank is doing great but I’m thinking I want to reboot it, mostly the aquascape and placement of the tank, but I’ve been very satisfied with all the equipment. Definitely check out some previous videos by Mile High Reefer to get a deeper feel of the livestock and equipment inside. 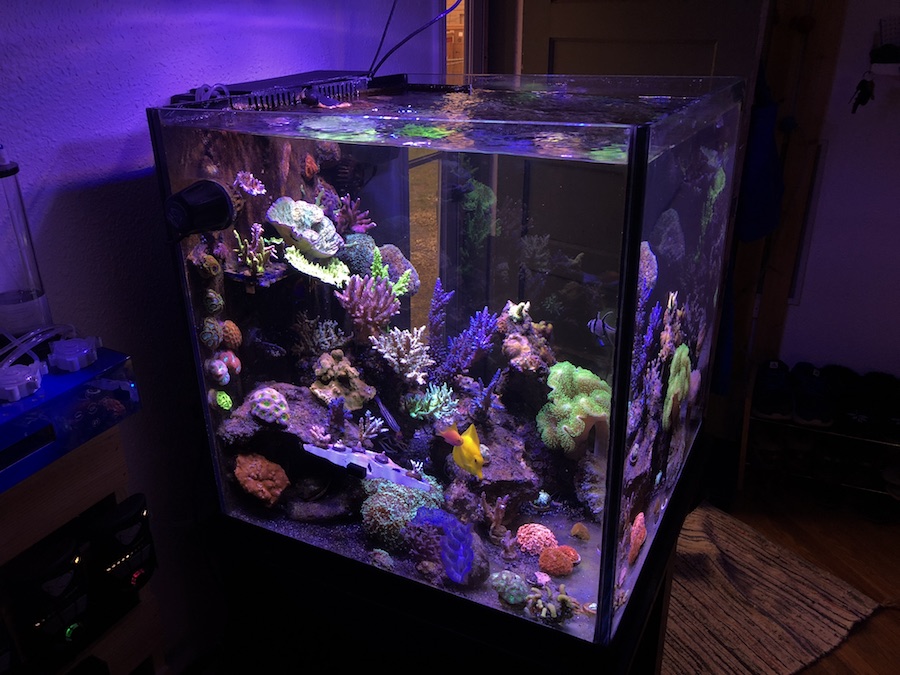 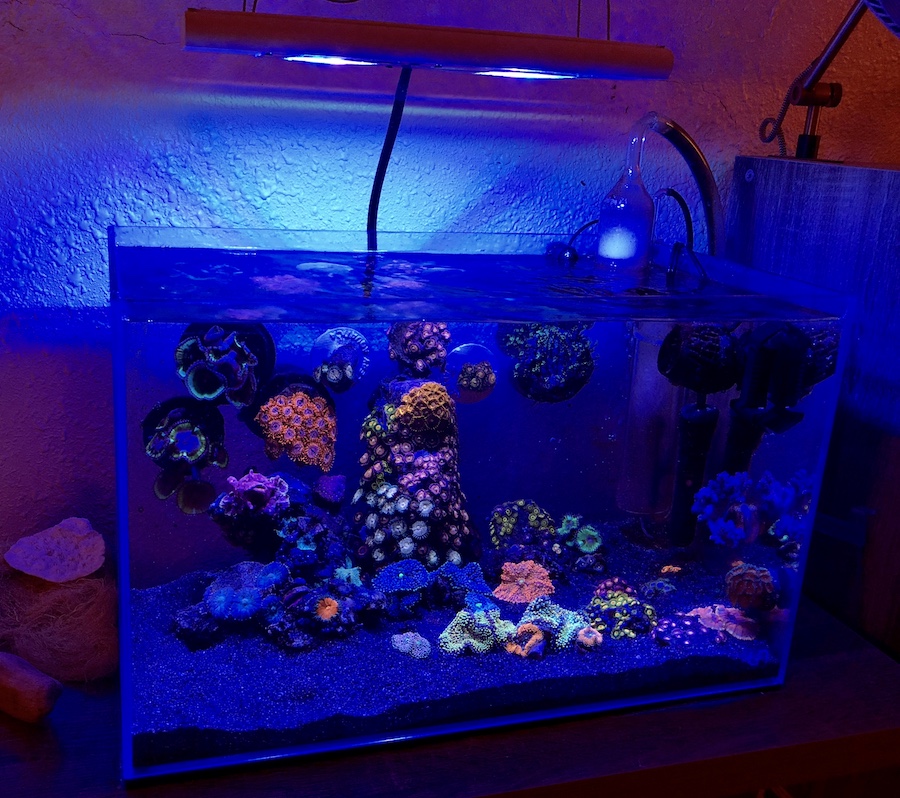 The Nano Reef – This tank has been a delight but it definitely has a mind of its own. The initial goal was going to be a seagrass tank, and then a flower anemone focus, but over time the population has shifted towards Ricordea and Zoanthids. Now that these animals have become the dominant critters inside it’s been fun to keep an eye out for complimentary colors and strains of Zoanthus & Palythoa, I’ll score a reasonably priced Hallucination zoanthid one day.

The tank also includes a pistol shrimp and wheeler goby, a blue coral banded shrimp and one peppermint shrimp. There is no filter really, only an air-driven glass skimmer, and Aqamai KPS pump and the AutoAqua Smart ATO Micro for top off. The light is the latest flavor from NanoBox Reef LED with no white LEDs, only a ‘mint’ color that I really should discuss more one day. 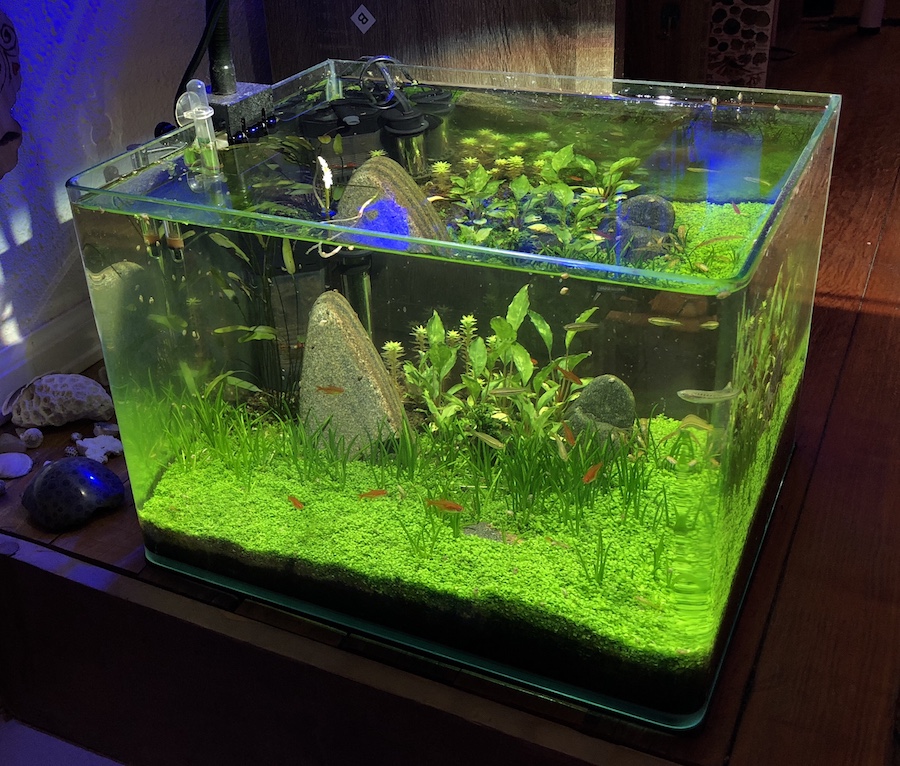 The Nano Iwagumi – This tiny planted tank is an absolute delight, It’s been running about two years and has a huge carpet of Hemianthus ‘Monte Carlo’ with a small island of various Crypts and stones. There’s a ton of fish in this six gallon tank including five sparkling gouramis, nine ember tetras, 12 oddball microdanios of unknown species and a couple assorted shrimp.

This is the Dennerle ‘Scaper tank with included internal filter and it is lighted with a Kessil A80 plant LED spot. I don’t dose CO2 because I don’t want the plants to grow too fast, but instead I give it around 3ml of Seachem Flourish Excel everyday. 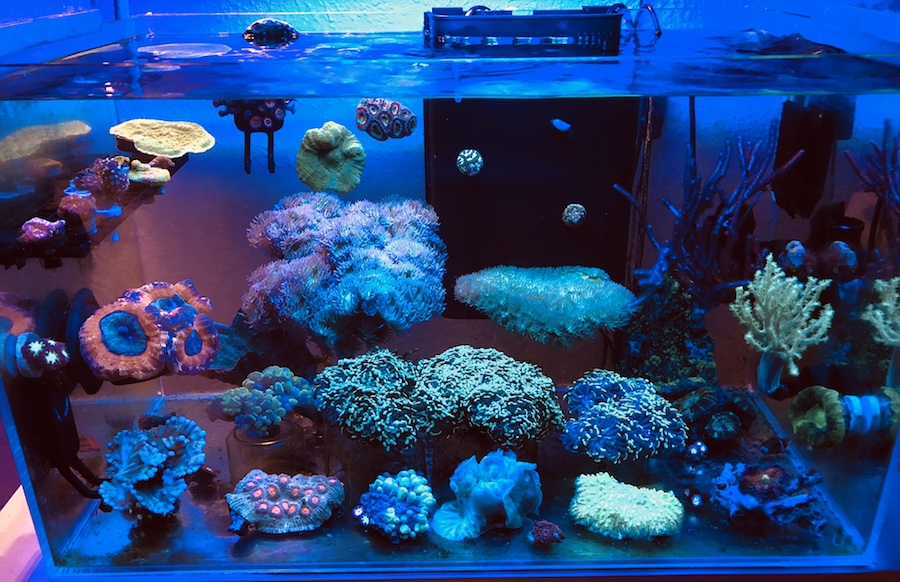 The CORAL Aquarium – This is a very neat tank that will certainly get a feature in teh future. It’s a UNS 18 gallon tank with the smallest model of LupyLED over it. What’s neat about this tank is that there is NO rock, NO sand, NO biomedia whatsoever. The black housing in the back is a simple surface skimmer in which the heater resides and there’s also a controllable Tunze NanoStream creating a small wave for flow inside the tank.

The corals rest on thin plastic makeshift holders and as you can see, many of them are fixed to the glass with various magnet mounts. The Coral Aquarium is really the quarantine tank for new corals, and also for corals to be isolated for a few weeks before going into the fish tank to give a thorough removal of unwanted sponges, basic pests, and especially to burn out any potential fish parasites.

There’s SO MUCH I could say about all of these tanks, and I will try and cycle them through the blog as I come up with interesting things to show you about them. Let me know if you want to see more of these tanks, which ones, and what in particular etc. I Can’t wait to meet so many new faces in Orlando this weekend and definitely don’t be shy about whipping out your phones and showing off YOUR reef tanks!

Reef Endurance is a new brand of liquid supplements

Teleport Yourself to Reefapalooza With Our Saturday & Sunday Livestream Videos