EcoReef Two: This is what a Reef Tank Looks Like With NO Filter

The concept of having ‘no filter’ in a reef aquarium generally applies to tanks that are run naturally, with a significant amount of sand and a lots of live rock. The sand and rock constitute a significant natural biological filter but I’ve long believed that sand and rock are oftentimes as much of a burden on the aquarium bioload as the animals themselves.

EcoReef One, a model for a low energy nano reef tank

The first time I tried to push the envelope away from the reef aquarium paradigm was with EcoReef One, my first tank which used no live rock replaced instead with an all ceramic framework instead. That was eight years ago and at the time I wasn’t sure that somehow the ceramic material would perform the same as the limestone rock that all of us had always used.

As you might imagine this tank turned out fine and no doubt the use of complete water changes with no sand and no fish helped with the experience. This tank did however have a small internal filter in which I periodically placed activated carbon to polish the water, and some biomedia, you know, so the bacteria can have a home.

The next experiment in reef aquarium ‘rule breaking’ came with EcoReef Zero, using the same tank as EcoReef One but this time stripping everything but the filter. This five gallon tank was home only to a small specimen of elegance coral but this time there was no sand, no live rock, and no rock whatsoever.

This minimal nano reef was an absolutely wonder as it helped to showcase just one coral as a mini ecosystem all unto itself. This tank still had the small internal filter with dedicated biomedia and occasional use of carbon to help filter the water. EcoReef One used no sand and replaced the live rock with ceramic rock, then EcoReef Zero did away with all the rock and used only a basic filter, so naturally it was only a matter of time until I put together a tank that stripped things down even further. 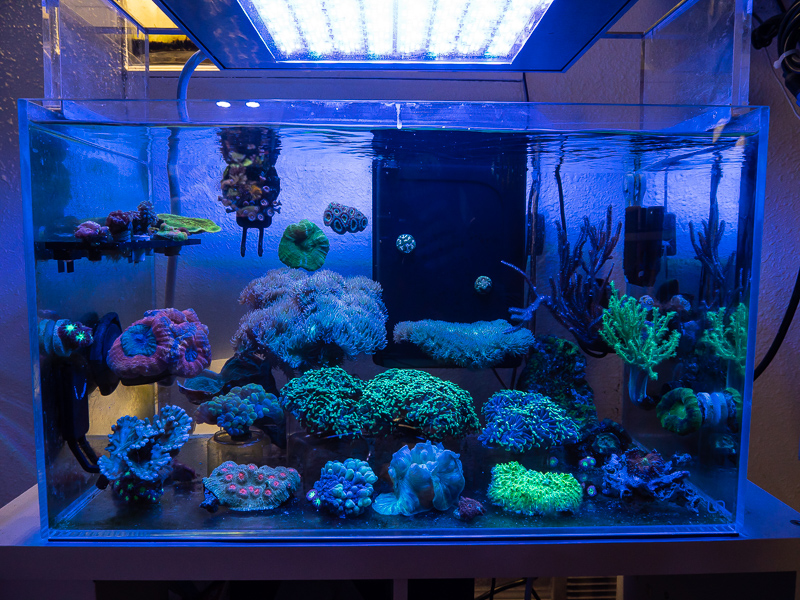 EcoReef Two is the final evolution of ultra low maintenance reef keeping with no sand, no rock, NO FILTER and I really couldn’t be happier with the results. “But Jake! What’s that black box in the back? Sure does look like a filter” I can hear you saying, that is a filter box but this device is only used for surface skimming and that’s where the heater lives. And yes there’s a few scraps of rock but this is simply the base that some corals come on and usually removed when it’s practical to do so.

So what IS running this tank? Only water flow, a heater, and a light, it really doesn’t matter which kind but I’ll tell you it’s a LupyLED for the lighting, a preset Aqueon heater, a Tunze NanoStream and a tiny return pump to run water through the surface skimming box. The corals are all perched on on the glass using magnets, a couple frags are glued to the black box, and everything in the midground are on hand-fashioned plastic holders.

Unlike previous EcoReefs since this tank is around 20 gallons I don’t do massive water changes, but i do target the detritus where it accumulates and swap out around six gallons every four to five weeks. The only other thing about this tank is that the LupyLED is kept at very low brightness and usually runs mostly blue to reduce algae growth – this tank might have no rock, sand or filter but it does have its limits. Also all the corals in this tank are super easy and non-demanding like softies, LPS, Duncans, Euphyllias, Lords and assorted frags. 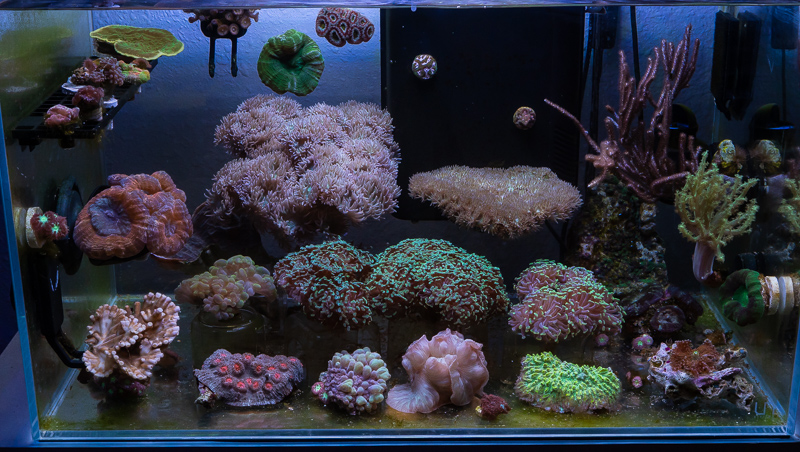 To be perfectly honest, this 20 gallon glass box wasn’t started to be a sequel in the EcoReef saga, it was compiled out of necessity to 1) manage overflow corals from other tanks, and 2) to serve as a two-way quarantine tank. This coral QT is used to condition new corals and rid them of pests and unwanted hitchhikers, and it’s also a place I like to keep corals for a month before adding them in with my Angelfish tank to ensure they’re free of any potential fish diseases, however minimal that risk may be.

I’ve long suspected that there’s this weird misplaced emphasis on “surface area” as if somehow you’ve ever walked up to a tank and really thought it was somehow lacking in places for bacteria to grow. YES, Yes, yes we need to have places for bacteria to grow but this is all relative to the bioload of the aquarium and especially how much you feed it. 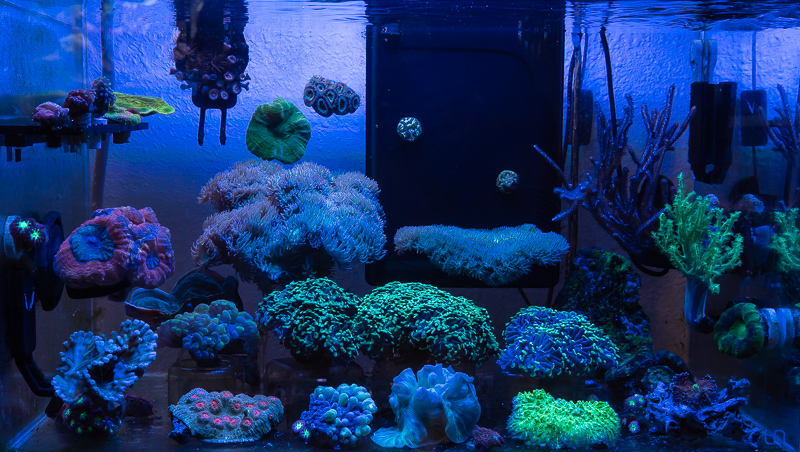 Up until now the only ‘trick’ to these EcoReef tanks has been to not include any fish since they have a higher metabolism, and need to be fed pretty much every day. That being said, I think I will keep an eye out for a small algae eating fish for EcoReef Two, probably just a small blenny just to keep the light algae in check.

This tank was put together not to prove a point, but simply out of convenience. On a long enough time line everything introduced by live rock can become a pest – this includes sponges, coralline algae, vermetid snails, and anything that could potentially irritate or compete with corals. By eliminating every factor that isn’t absolutely necessary for coral health and growth EcoReef Two does demonstrate how easy corals are to keep and it’s really now more of a pure coral tank than a reef tank. 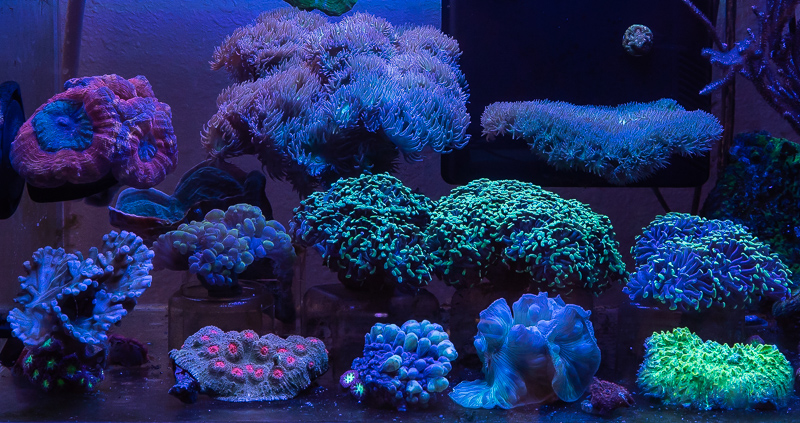 EcoReef Two has been one of the absolute easiest and trouble free tanks I’ve ever had. All the corals were placed in this tank immediately upon set up with no cycling in early November, so five months now – it went through an expected mild diatom bloom but now it’s rock solid.

It’s possible that I may use some very light handed use of chemical and mechanical medias in the future, especially if I start to feed the corals more but for now it’s great fun to have a tank purely dedicated to corals that is successful by simply focusing on the elementary needs of corals: accurate salinity, stable temperature, adequate light and decent water flow.

Captive Bred Bellus Could Be The First 'Designer Angelfish'