The Circus dive site is located along the coastline, about 30 minutes west of the Murex Manado resort. The dive starts with a sandy slope covered in chocolate chip starfish and tufts of seagrass. As the sandy area begins to slope downwards it gives way to a small rocky wall at one end and flat shallow reef to the other.
You will find a variety of critters living in the sand, we spotted a trio of ornate ghost pipefish, and have been told there is a chance to see different octopus moving around the seagrass. This site is also popular for spotting pipefish, which I’ll have to admit are one of my favorite critters, one that can pull me away from looking at coral. 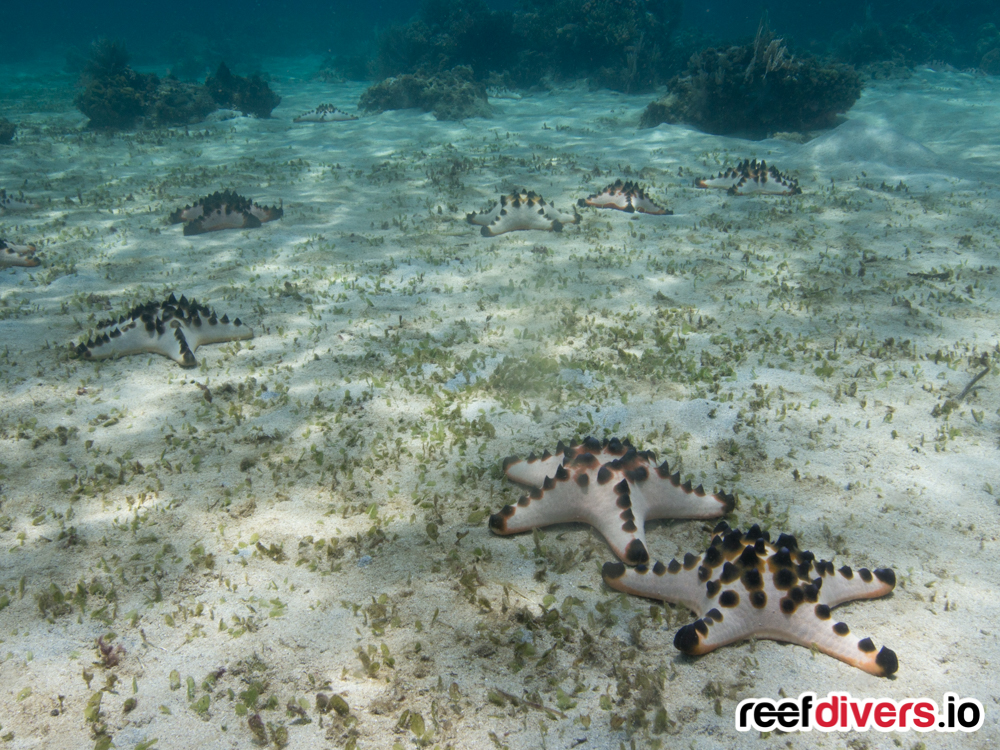 But once you’re done counting critters, we recommend heading north-ish or turning right as the slope begins to drop. You will be rewarded with a never-ending field of bottle brush corals. To find these corals, first, swim over a sandy patch between 7-10m deep.
As you keep swimming you will come across some yellow staghorn Acropora. Unfortunately, much of this stand is dead, and we’ve been told it has been this way for more than ten years. Difficult to say what the culprit was, but at least it wasn’t bombing, as there are still a few surviving colonies and the dead skeletons are at least intact providing habitat for other marine life.

Past these staghorns, you start to enter the bottle brush zone. The term bottle brush refers to the shape or growth form of Acropora corals which have a thick branch and closely spaced long tubular corallites.
At first, you will see a few thick clusters, along with some big Turbinaria and scrolling Echinopora colonies, but as you keep swimming, you will be amazed by the number of corals in this large stand.
There are several different species of Acropora that form this bottle brush branch shape, but the species at Circus is called Acropora turaki. This species is characterized by the long tube-like corallites and upright main branches that form into clumps.
If you look closely you will notice at least three different colors of this same species all living in the same area. We found reddish brown, green, and purple. You can tell they are the same species as they are living so close together without conflict. Thanks to Vincent Chalias for the awesome macro shots of these corals from Circus.


Tucked between the bottle brush branches you call also find some rather large bubble corals, and plenty of other hidden gems. I found this pretty purple Rodactis mushroom, and a stripped pipefish guarding his lair.
If you want to venture further down the slope, swimming to the deep end of the bottle brush corals and beyond you will find mostly a muck habitat, with sparse coral bommies, and ridges with Anacropora rubble. We found quite a few little nudibranchs crawling around the rubble which is a good excuse even to just take a peek in the deep.
Not the most diversity of corals on this dive, but interesting none the less. And the never-ending field of bottle brush corals is sure to impress even the most experienced coral spotters in the group.

Thanks to Murex Diver Resort for hosting us and showing us around Northern Sualwesi.