The AquaVital Marine Test 5in1 is a new test ‘strip’ from Aquarium Munster which can give a quick snapshot of basic seawater chemistry. With the Marine Test 5in1 you can get a quick, rough estimate of the Nitrite and Nitrate levels of your saltwater aquarium, as well as more important values of Calcium, Alkalinity and pH.

Interestingly, when we first started keeping aquarium the use of test strips was quick popular and it was the first test we ever ‘performed ‘ – by dipping the test strip into the water. The use of test strips has persisted in many different water quality monitoring applications, most notably pools and freshwater tanks. 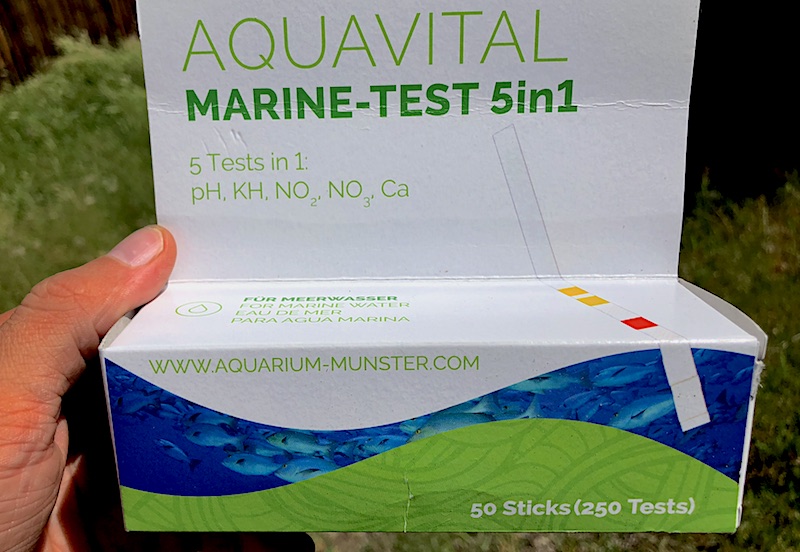 But the AquaVital Marine Test 5in1 is one of the newest to be developed specifically for measuring important seawater parameters. The range for the nitrite and nitrate portions of the test strips is informative enough but reefers who are used to getting results of alkalinity or calcium in half degree or 5 ppm increments, the scale of the AquaVital 5in1 will seem way too broad.

With an alkalinity scale that ranges from oº to 20º in 3º increments, and a calcium scale that ranges from 0 to 500ppm in 100ppm increments, you’re not going to get a very precise value for either of these parameters. But if you’ve got an LPS tank or large coral holding system where precise levels are not absolutely critical, and you just want to make sure your alk is above 6 and the calcium is above 400, there’s no quicker test than the AquaVital Marine Test 5in1.

Dr. Rocha is Treating us to some Delectable Anthias Photography