Gorango reef is a long underwater ridge running parallel to the northern coastline of Weda Bay. The reef is divided into three dive sites following the contours of the ridge and sloping pinnacles. The dive sites are Gorango Obesar, Mini, and Kecil, or Large, Mini, and Small.
Gorango Mini is in the center of the two sites with the largest pinnacle, Gorango Obesar, on the eastern end of the ridge. The top of the Obesar ridge breaks the surface of the water and is the only point which does so on the ridge.

As you swim along the contour to the west, the reef top slopes between 3m and 6m  deep. On either end of the narrow ridge there are coral covered slopes and at times steep walls. On either side, the ridge descends to 30+m before you start having more sand and boulders.

The first ridge we visited was Gorango Mini. We found this dive to be chock full of fish, with some huge walls covered in plating corals. The species which really dominated was Montipora, and not only on Gorango Mini but Montipora was everywhere along the entire ridge.

After Acropora corals, Montipora is the most abundant genus of corals with around 85 known species worldwide. It has similar characteristics to Acropora in that is has small polyps and relatively fast growing, this is because both Montipora and Acropora are closely related both being in the Acroporidae family.
In general the Acroporidae family is dominant in almost every reef habitat in terms of numbers and variety of species. Corals from the family Acroporidae all like reefs with good light and water circulation.
In general the Acropora corals colonize the upper reaches of the reefs with Montipora extending further down reef slopes. Acropora and Montipora together account for one-third of reef-building coral species.

Montipora corals can be recognized by looking at the small corallites which are embedded in the surface of the coral. These corallites are usually between ridges, and lack any distinct corallite walls.
Montipora corals can have various colony shapes including thin plates that can be flat, vase shaped forming layers or tiers. They can also be encrusting layers, boulder-shaped colonies or branching, you can even have colonies which are a combination of plating, encrusting and branching. To identify the genus Montipora the key is to look for the small corallites embedded in the coral.
See also  There's a Lot of Phoney 'Maricultured' Coral in the Hobby

The second ridge we visited was Gorango Kecil. This ridge comes even closer to the surface with soft corals and table Acropora starts around 2m deep. At the beginning of the dive we dropped in on one of the biggest barrel sponges I’ve ever seen. It was at least 3m tall and 2m wide. But again the Montipora corals really stole the show.

We found many bright green and yellow colored plating Montipora which were quite photogenic. And I will have to admit, I have yet to master species identification of Montipora, it is definetly on my list of things to do… but that list keeps growing!!
I think what’s more important is just being able to recognize the genus of each coral, even if you can just take a second to admire the corals without knowing their name, then you can start to recognize the different growth forms this is already a step in the right direction for appreciating coral diversity. 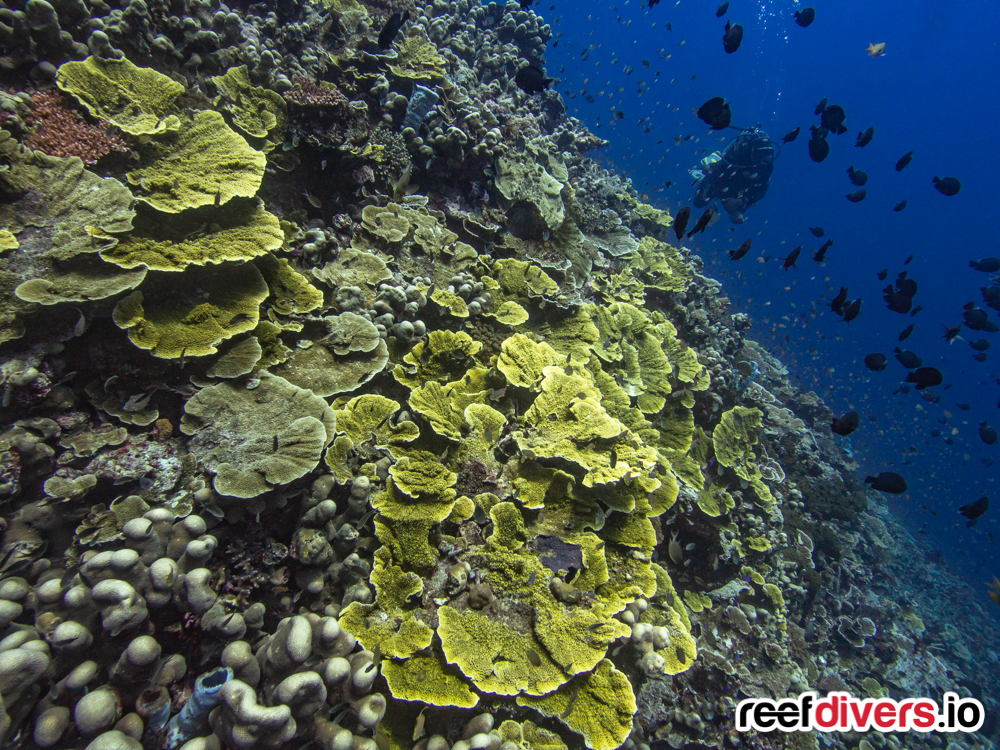 Gorango Obesar has a similar layout to the first two sites, but this is the only reef where corals break the surface of the water making it the shallowest of the three. During this dive we had our macro lens which doesn’t give much of an overview for the site. There were more Acropora corals on the top of the ridge and again Montipora along the edge.
Next week we will cover two more reefs in Weda which have a similar habitat of shallow ridges of Acropora breaking the surface of the water so you can have a better idea what this looks like!
Big thanks to Weda Reef & Rainforest Resort for showing us around Halmahera!
See also  New Half-Black/Lemonpeel Angelfish Hybrid produced by Bali Aquarich

Reef Reboot Check-In #2: No Water Changes for a Year!