If you’ve been wondering why it’s been unusually quiet on the blog, it’s for a very good reason. With the first ReefStock Australia coming up in just under two months in Sydney, we decided to do a tour of most of Australia’s best reef and aquarium stores across three cities.

It only took seven flights, over 20,000 miles and ten days to visit a nearly 20 aquarium shops in Sydney, Melbourne and Brisbane. But after meeting with more than half of our vendors and sponsors at ReefStock Australia we can confidently say that Aussie reefers are more than ready for their first reef & frag focused reef aquarium event, and we got to see a lot of cool animals and displays while doing so. 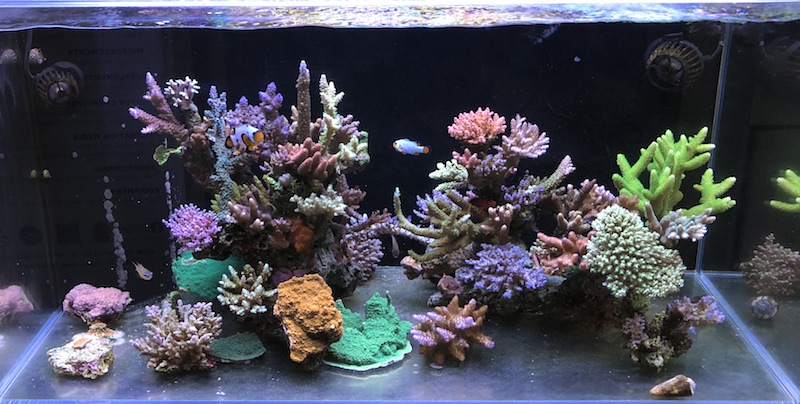 Although Australian reefers only have access to domestic corals, the thousands of miles of coastline are home to a huge diversity of corals and Aussie reefers really make the most of it. The SPS coral tanks are very well represented and each store has unique reef aquarium displays of all kinds.

Rather than go over each one individually we thought we’d just collect the best of the corals and displays that caught our attention, and give both international and local visitors a preview of what they can expect to find and see at the first ReefStock Australia. 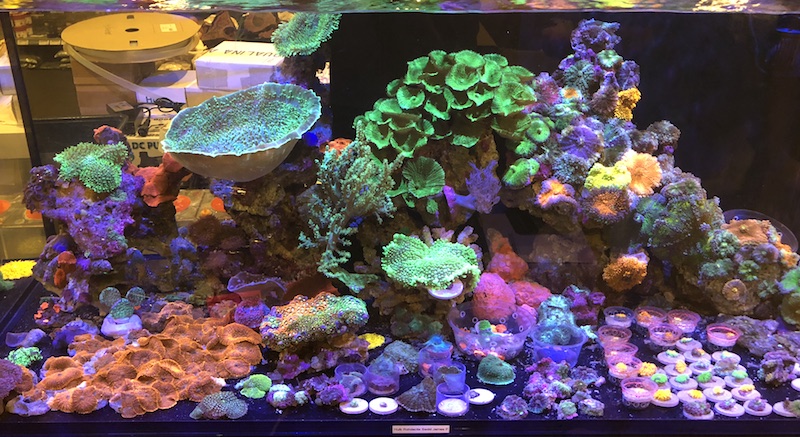 The reef aquarium displays of Aussie LFS spans from the very cool specialized corallimorph tanks like the one above from Reef, River & Reptile to the full on small polyped SPS corals like the one below from Reeflections Australia. You’ll definitely want to check out the reef we made over at Nature Aquariums for a look at what’s possible when a store ha multiples of the same coral colonies in stock. 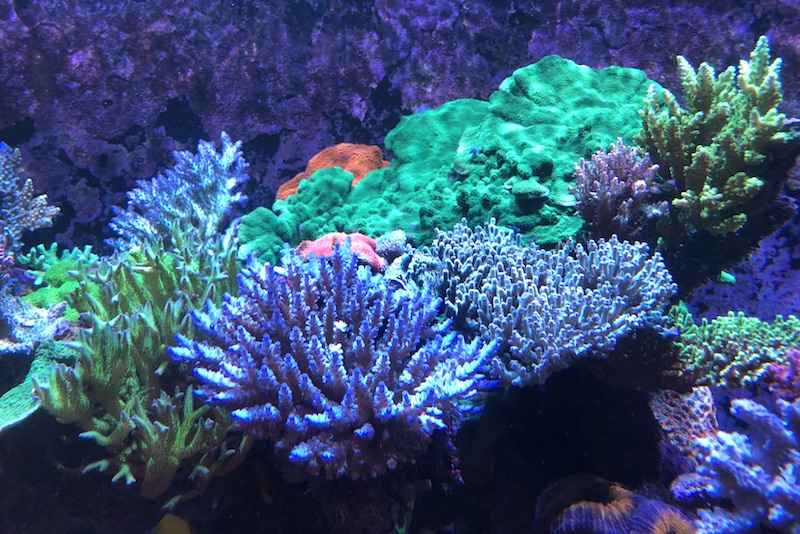 One inspiring detour we made while in Melbourne was a visit to Subscape, a freshwater aquascaping specialty store that had a ridiculous amount of incredible planted tanks. One of these was among the largest planted tanks we’ve ever seen with dimensions approaching roughly ten feet, by three feet tall and four feet wide! 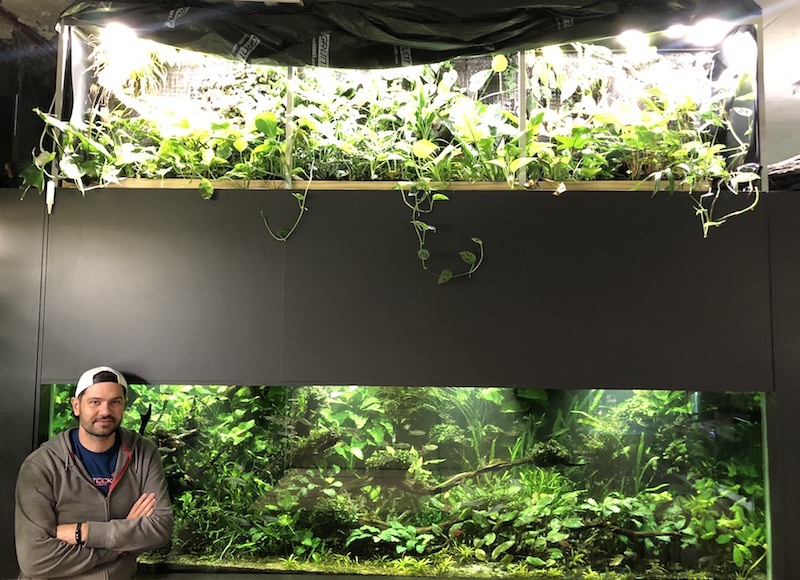 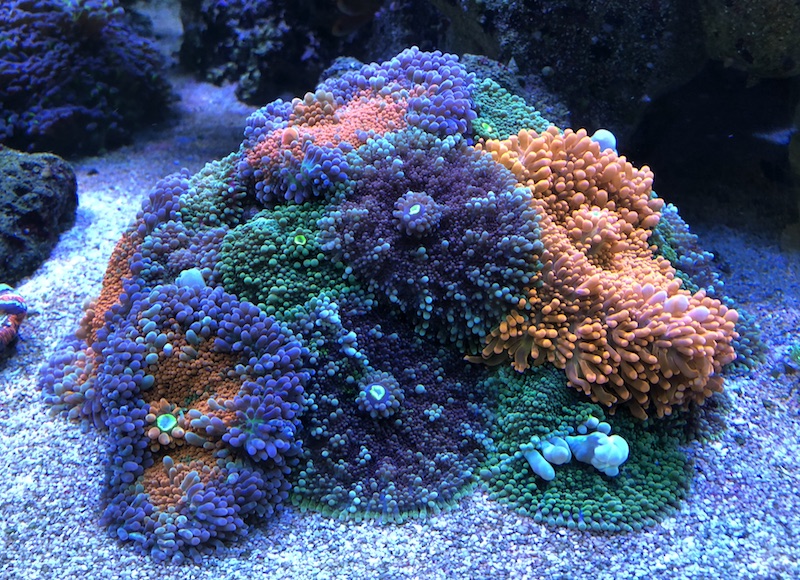 One thing that always tickles our fancy about visiting Australian LFS is seeing just how many more and bigger RIcordea yuma they always have both on sale and on display. ‘Western Reefers’ may have access to more yuma rics in general, but Aussie reefers really know how to take care of them, and the quality and diversity of their Ricordea supply is really something to take notice of! 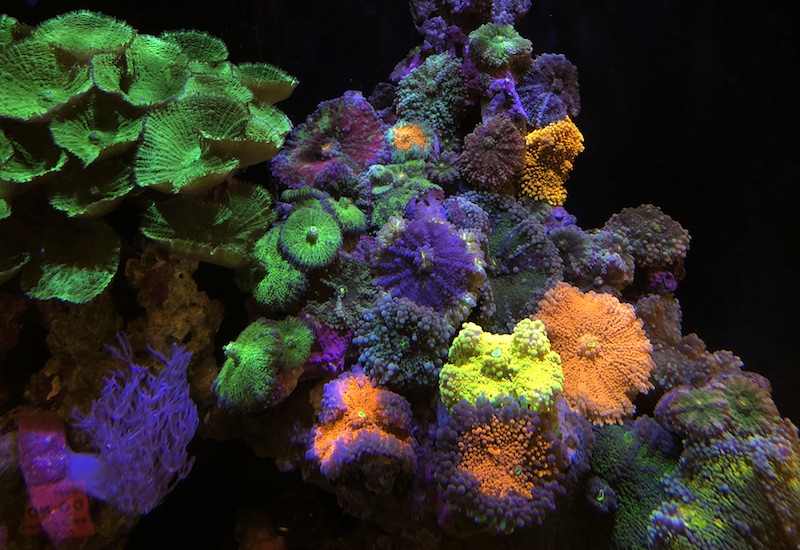 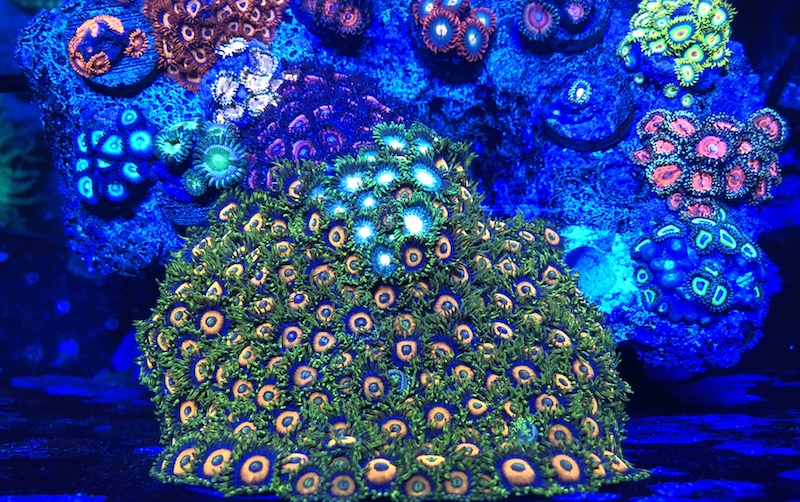 If i had any reservations about what kind of zoanthids we might expect to see at ReefStock Australia, those evaporated right away by visiting Gallery Aquatica. Over the last year this coral and fragging specialty store really boosted their catalog of zoanthids and it includes many novel strains that even American reefers would be envious of. Not to mention Gallery Aquatica has many of these zoanthids clustered into bouquets that they will be offering on Alternative Reef magnetic frag racks. 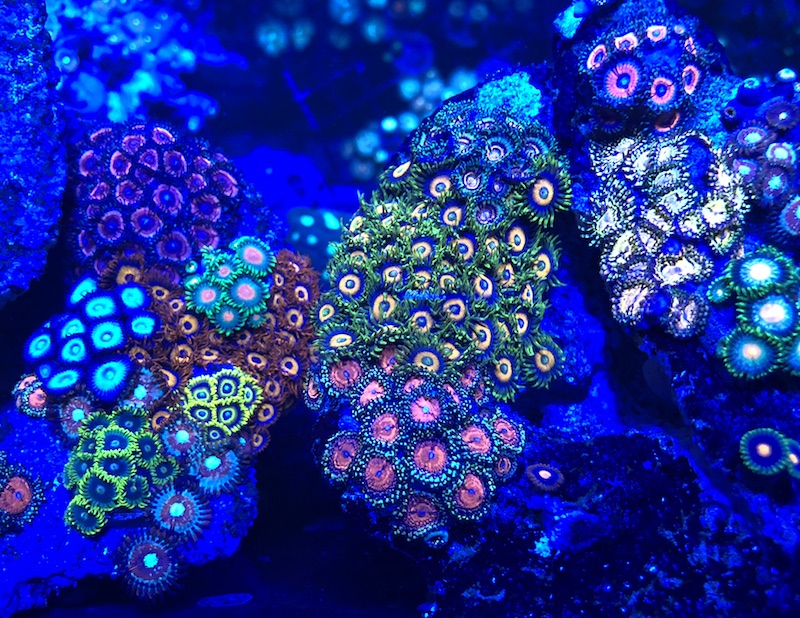 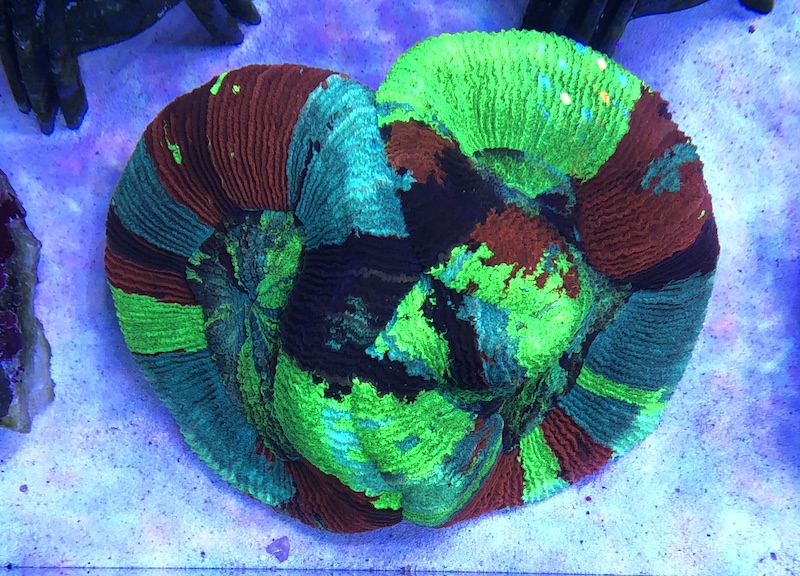 While we usually tend to think of Indonesia as the source for sensational Trachyphyllia specimens, one store Fish World Aquarium had an incredible ‘painted’ Trachy that was as puffy as one could hope to expect. This specimen came from Salty Pets who has been clutch obtaining some insane quality Trachies from the southern barrier reef, as well as some extremely colorful LPS like the UFO Bowerbanki pictured below. 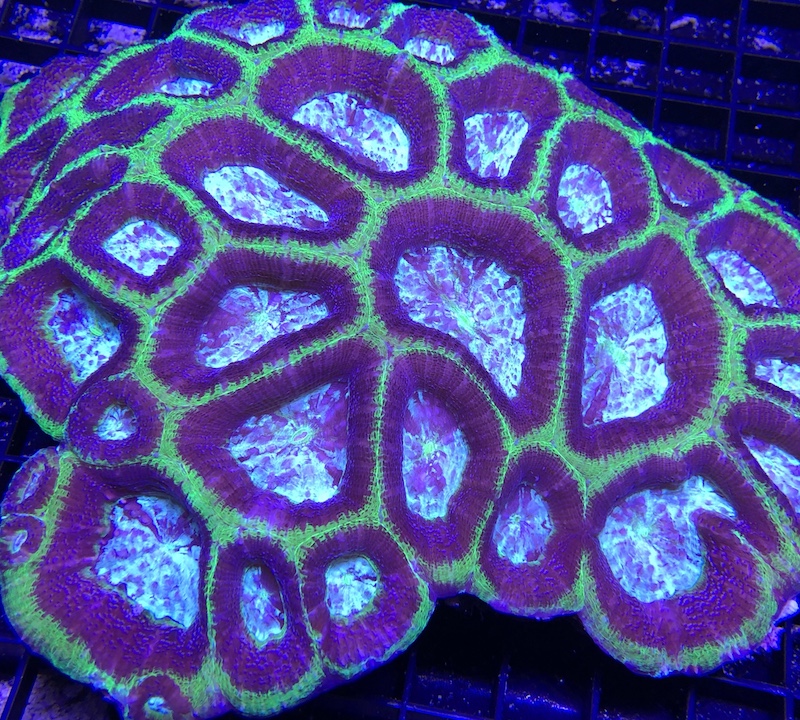 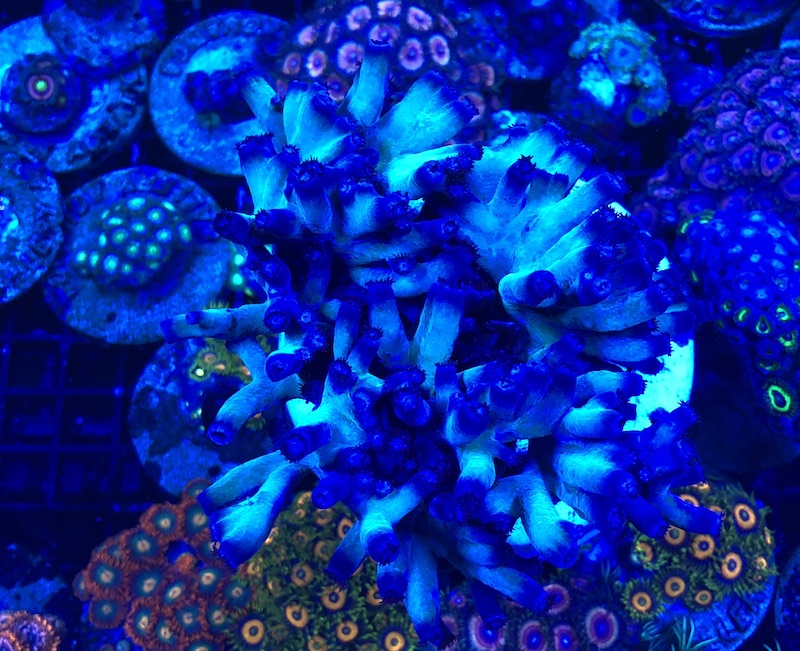 Another exotic LPS coral which is well represented in Australia is our old favorite, Turbinaria heronensis. The ‘Hero Cup’ coral is one of the oddest species of Turbinaria with some colonies looking a lot more like a miniature Duncan coral than a plating, foliose cup coral. We spotted two exceptinal colonies on the tour, a mostly branching blueish specimen at Gallery Aquatica and a more normal green colored and shaped colony. 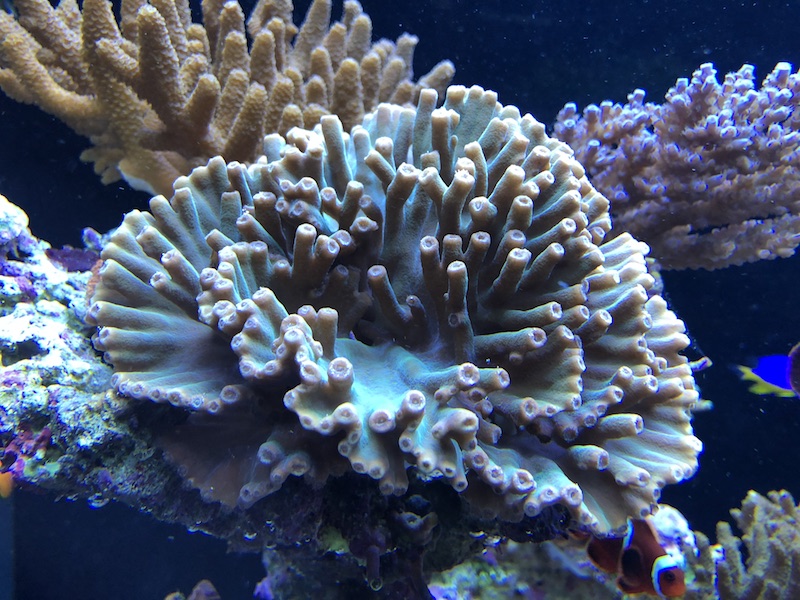 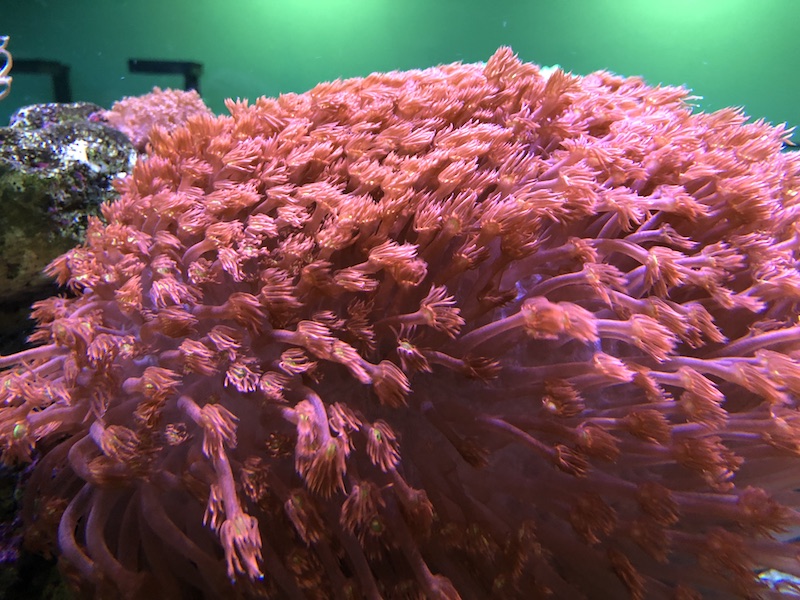 Finally if there’s one group of corals that Australians are ‘best at’ it’s got to be the flowerpot corals. With access to so much abundance and variety, Australian reefers have some of the best Goniopora colonies we’ve ever seen, ranging from bright red Bernadpora sutchburyi to exquisite blue G. tenuidens, both of which were spotted at Fish World Aquariums in melbourne. 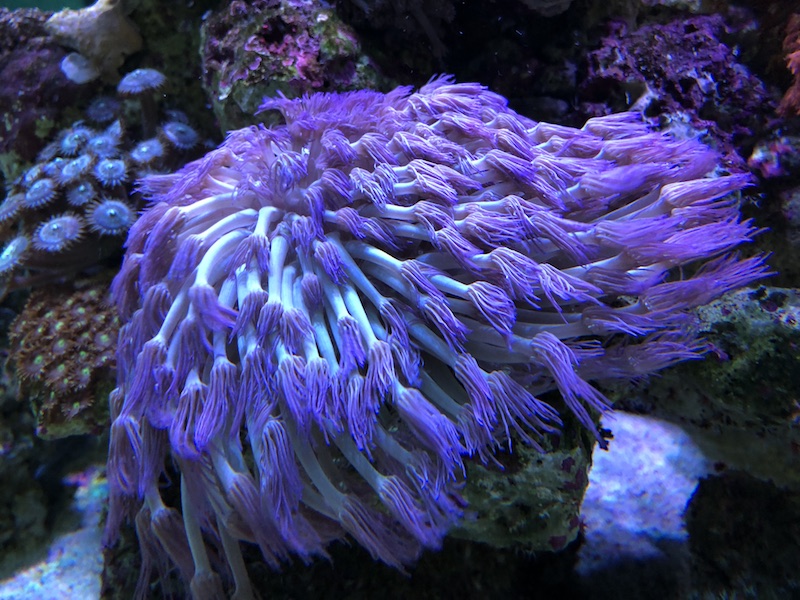 By now it should be clear that although we’ve got a pretty good supply of Australian corals in America and Europe, there’s still a whole lotta of diversity yet to be discovered and appreciated from the land down under.

Prospective attendees to ReefStock Australia will be the first to witness the variety of Australian corals in the fun and exciting setting of a good ole American style coral event, and we can’t wait to see you all there. Be sure to RSVP to the event page on facebook and if you know you’re planning to go, don’t forget that presale tickets are now on sale. 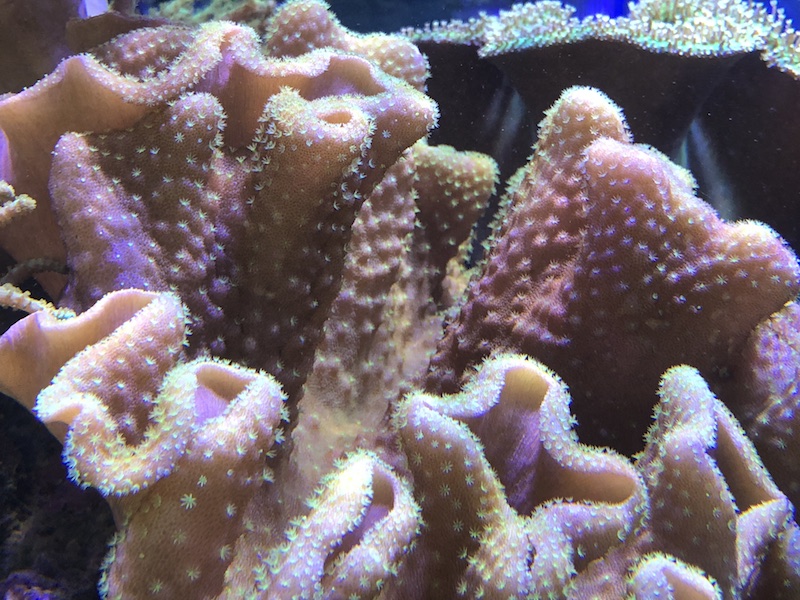 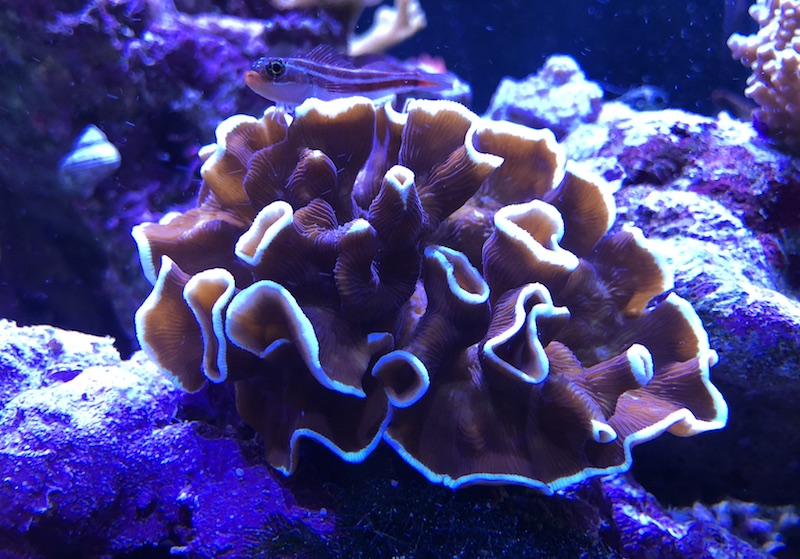 Extreme Low Tide At Bangka Island Exposes Corals To Air, And They Survive!