The Lennardi Wrasse is clearly one of the most colorful and beautiful of all the medium and large size wrasses. As beautiful as Lennardi wrasses are, all the specimens that we’ve seen to date have been only of juveniles and females, and we’ve been dying to see what a nice, large male specimen looks like.

We already knew that female colored specimens of Lennardi wrasses can get up to eight or nine inches while retaining their blue and yellow spangled color pattern. After years of nearly worshipping this as one of the most holy grail of wrasses, we’ve finally got great pictures of what a male Anampses lennardi looks like and it was well worth the wait. 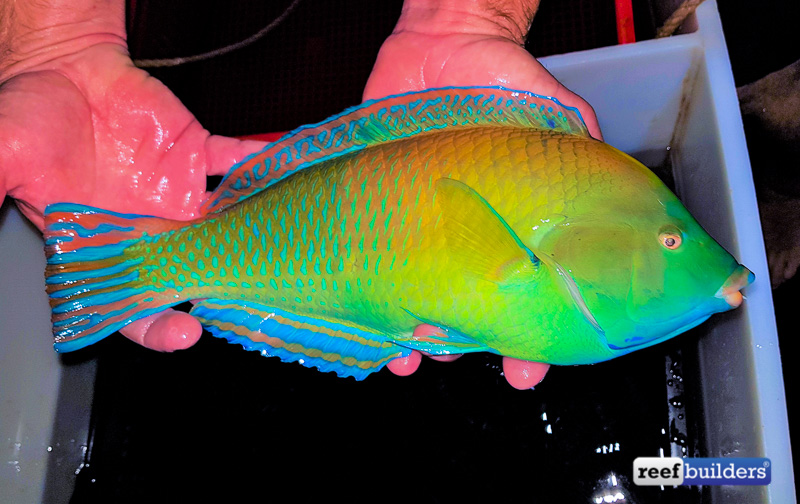 Apparently it takes a fish up to ten inches, 25 cm or more in length to display the true coloration of a supermale Lennard’s wrasse and it certainly lives up to the caliber of female color and pattern. The base color of a male Lennard’s is green overall with a blue edge to every scale, and gorgeous blue and yellow streaks in the unpaired fin.

The face of this male lennard’s wrasse also shows a nice blue patch on its face and cheek, and a prominent black spot in the lower center of the dorsal fin appears to streak down the side into a faded black bar. At a solid twelve inches long it’s no surprise that we haven’t seen any male Lennard’s wrasses before. 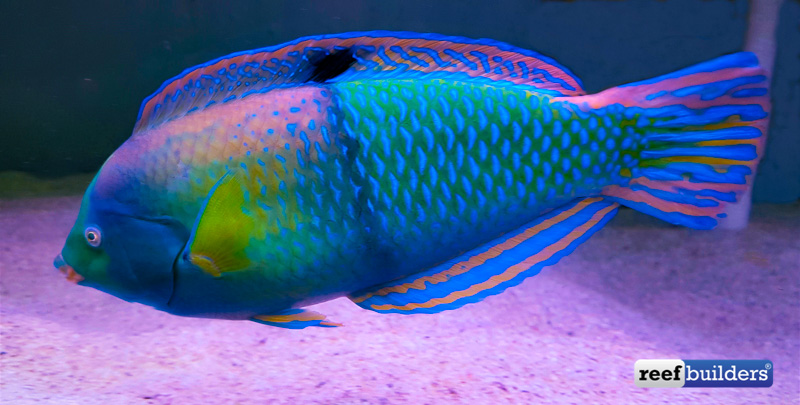 But according to collector Simon Hawke of Ocean Reefs Marine Aquariums of Western Australia, the males are also super fast and steer clear of people in the water – further explaining why we haven’t seen images of this fish taken by divers. The final coloration of a large mature Lennard’s wrasse should come as some comfort to owners of Lennard’s wrasses that are approaching maturity and now know they can expect a large, beautiful and showy wrasse.