Of all the hybrid angelfish sought out by exotic fish fanatics, the cross between the multibar and venusta angelfish is one of the rarest. Where Tigerpyge angelfish have become semi-‘common’ with a few dozens specimens being collected every year, the multibar x venusta hybrid is one that only shows up every two or three years!

The last time this hybrid Paracentropyge was documented was two years ago in 2016, also from RVS Fishworld, and before that it was way back in 2013. Not only is this particular hybrid very rare it also results in a very wildly patterned high-bodied angelfish which is the epitome of bold, beautiful, ,and incredibly exotic.

Part of the reason RVS is virtually the only collector to come across these is that they have fishermen the Philippines where the two parent species co-occur – this specimen was discovered 35 meters, 115 feet deep in Babuyan Island in the Northern tip of the Philippines. The freshly collected multibar x venusta specimen from RVS Fishworld is incredibly small and has yet to develop any of the blue of its Venusta parent, but the scribbled pattern is already in full effect.

At this size the little scribbled multibar angelfish should acclimate readily to aquarium life, being more curious about aquarium foods than an older adult fish might be. This is good news for its future owner who is likely to pay very dearly for the privilege of owning a fish that only appears every two to three years. 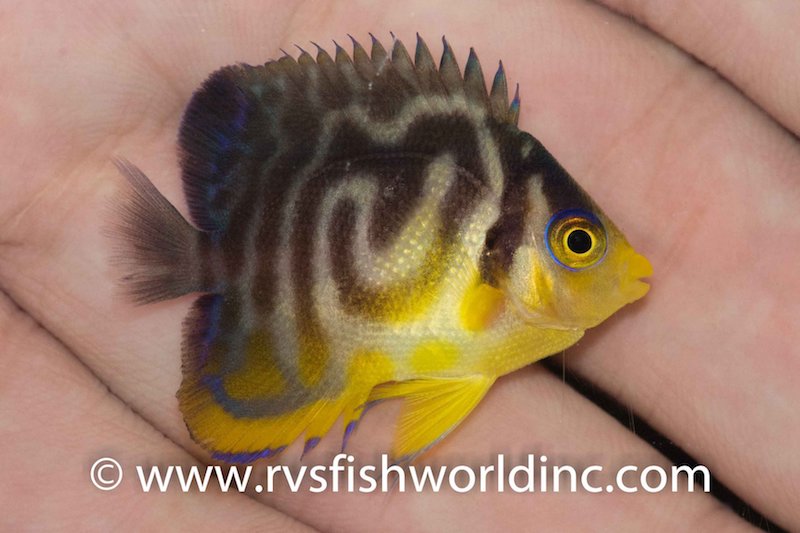 Check out these cool curved nano AIOs from Aqua Japan