Kessil A360X Review: Taking a Raw Look at The Hardware

Kessil is without question the undisputed leader in LED spotlighting for home aquariums both fresh and salt, with a variety of models from the minute A80 to the Jumbo A2000. No doubt one of the most popular models for Kessil has been the A350 size spotlight and with the release of the A360X Kessil has doubled down its commitment to the form factor. 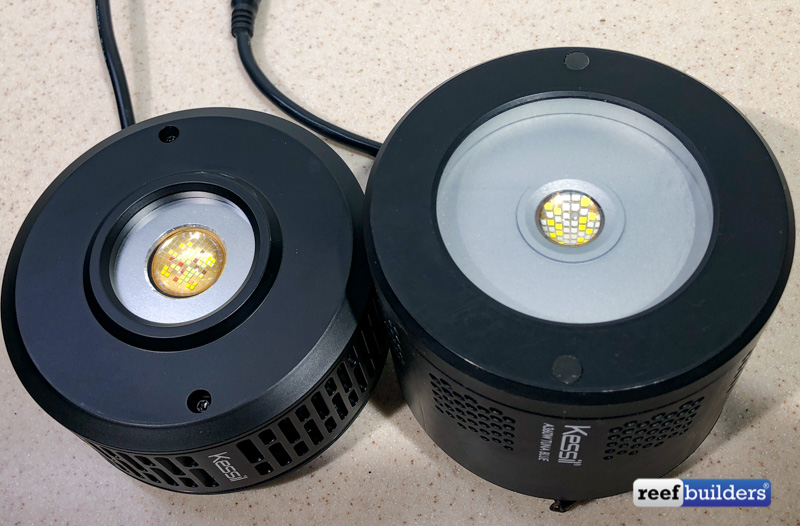 First unveiled at MACNA, the Kessil a360X is quite literally more of everything we love about Kessil lights and designs but in a smaller, more attractive form factor. Compared to the previous gen A360WE, the A360X is quieter, more powerful, more colorful, more controllable etc. Mind you we’re not even talking about turning on the light yet, because before we do we just had to take a peek under the hood and visualize how Kessil pushed the envelope so dang far.

First of all, one of the most obvious refinements to the appearance of the new A360X is the removal of the intake grill from the top of the light, somehow being magically incorporated into the air outlet as well. This leaves only a pair of smaller adjustment dials and two USB-C ports to adorn the top of this light, plus a couple attachment points.

On the business end the multichip is a little bit larger with many more individual diodes, in a variety of different colors. Below we show you a comparison between on alder A360WE compared to the new A360X at approximately the same size, but keep in mind this is the freshwater ‘daylight’ model for planted tanks because our reef spectrum sample is currently in use. It still has the entire dense matrix array on a high efficiency copper substrate for maximum heat dissipation and the complete assembly is under a common primary lens for optimum color mixing. 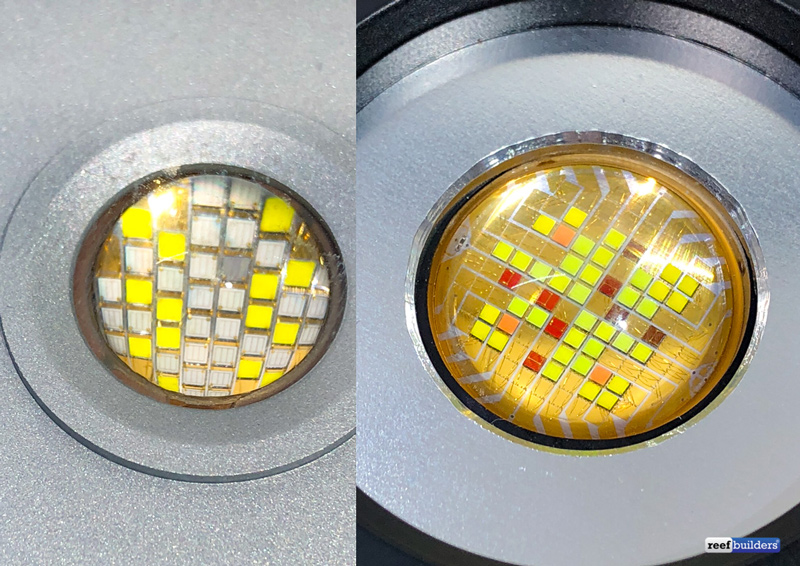 But the real magic happens on the inside of this light which is surprisingly, 50% empty to allow for air to flow in and out. Where the previous Kessil A360 spotlight used a standard block of aluminum cooling fins with an advanced vapor cooling system inside, the new light has a surprisingly smaller looking heatsink inside.

We believe this is partly an optical illusion since the heart of the heatsink is very flat and it is surrounded by partly spiraling cooling fins – a combination of more efficient LEDs and very clever heatsink design to increase surface area for cooling is part of what made is possible for Kessil to make the A360X so small.

The last small surprise waiting for us in our teardown was the discovery of the embedded magnets which will allow users to accessorize this spotlight – whereas the AP700 had narrowish beam angle which you could then spread out with optional diffusers, the A360X goes the other direction. Instead the A360X is natively very wide in its beam angle and there will be add-on lenses or reflectors to focus the beam, probably a more efficient way of modifying the beam angle without too much light loss.

By now you probably realize that there’s lots to learn about the new A30X LED spotlight from Kessil. This worthy successor to Kessil’s flagship LED will function and perform very much like its predecessor but there’s lots of small details that come together to make this a really cool and fun aquarium light.