Spending time in Australia, we got the opportunity to see with our own eyes, what coral collecting in these waters is like.

In another epic day on the bumpy, short sharp swell of Great Barrier Reefs water waters, Nic brought us to its millie spot, just around the corner from Mackay.
This place is just out of this world; we’ve never seen that many color variations, and that many millies… There was so many millies, it wasn’t even funny. 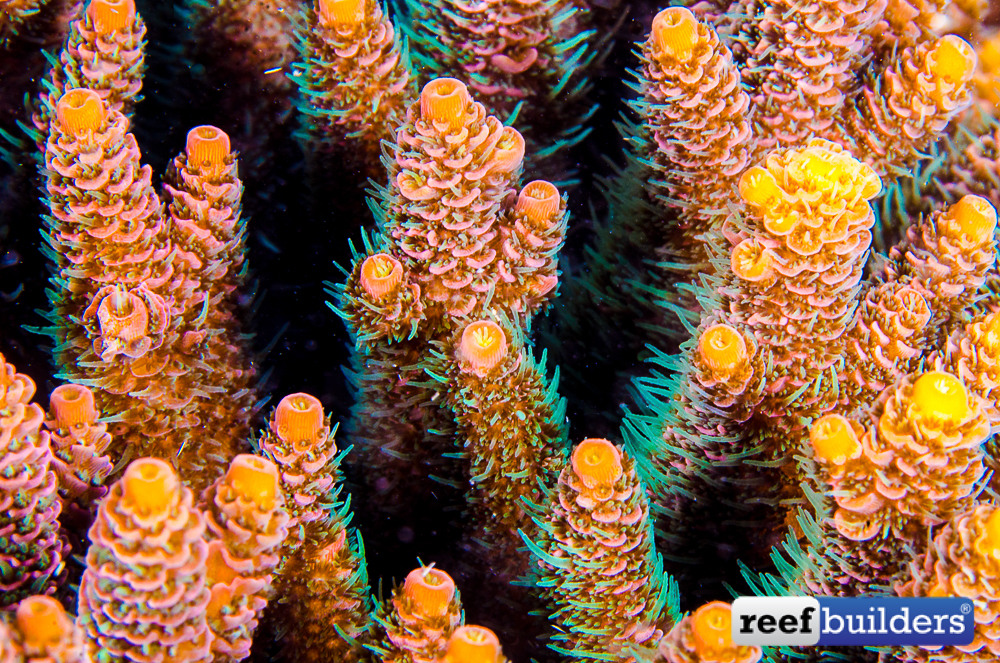 Almost all color variations of millies were on the spot. When we think of Oz Acros, Strawberry Short Cake, microclados, anthocercis, willisae… are the species that comes to our mind. These come from the Acroland, in clear oceanic water, where the swell hits the off shore reef, a few hours boat ride from the coast.

The millies come from the inshore reefs, and live in the dirtiest healthy reef we have ever encountered. The water was literally green, so all corals were in heavy feeding mode, all tentacles deployed, and the millies, have really evolved to slow down flow, and trap food in the center of their colony where all tentacles are extended. 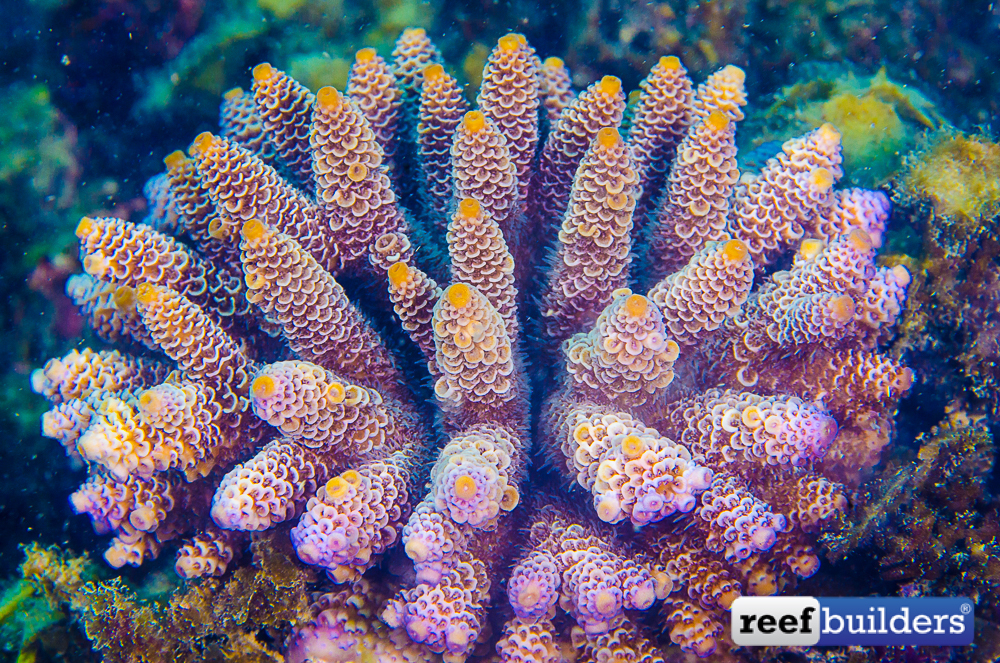 As we dropped from the boat, the visibility was just about a couple meters, we were right away welcomed by a pair of remoras, and we knew their buddy wasn’t too far away, it was a 4 meters nurse shark, that was checking us out… the next 3 hours were reefers in millies land, getting to see all possible A. millepora color variations, green, red, purple, blue, with all possible color variations of tips or tentacles.

Like many of the inshore reefs, this reef was covered in many parts by Sargassum algae, but in many places, corals seemed to win the battle and keep them at bay, living fields with almost 100% coral cover. 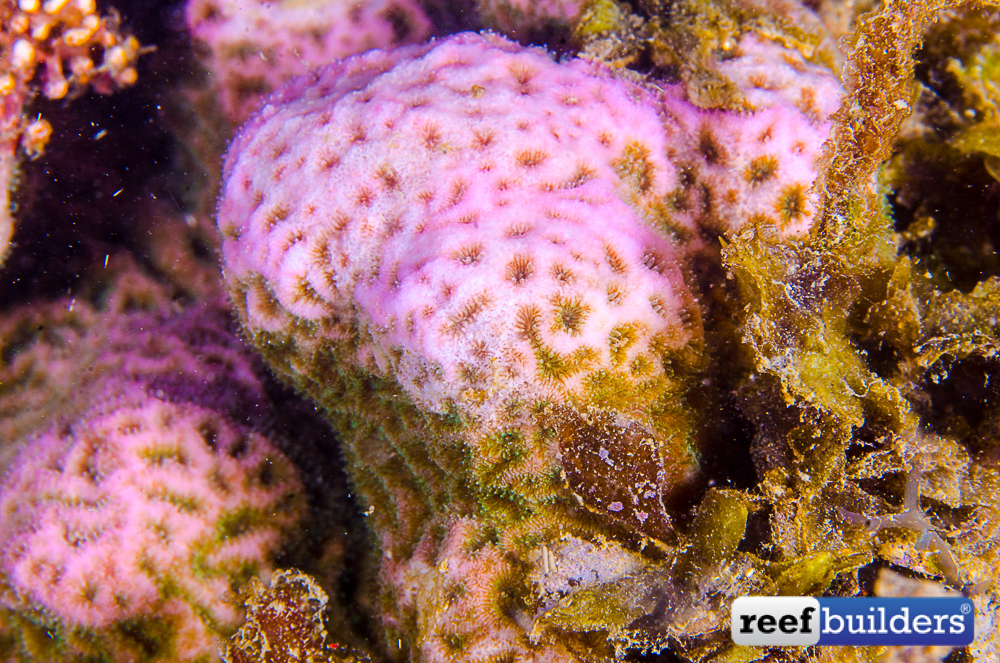 Acros dominate the coral population with over 70%, 20% Montis, leaving bits for few other corals such as Lobophyllia, Coscinaraea, Lythophyllon… all small crevices and free space was taken over by Protopalyhtoa, they were covering all the space that corals weren’t including under corals. 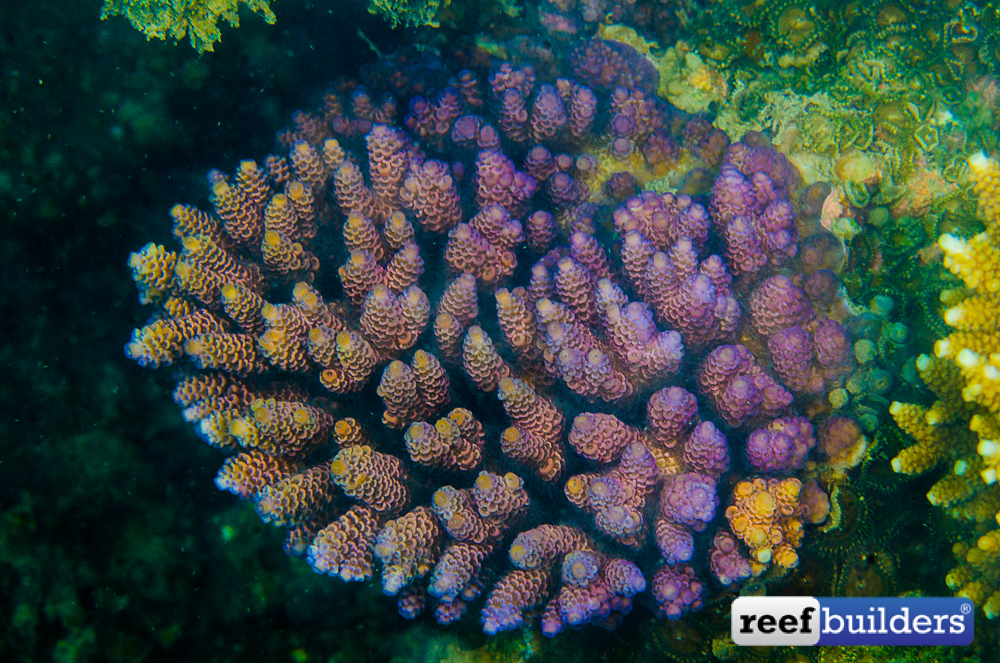 The millies group was dominating the reef and we could see the differences between, A. millepora, the thicker and regular sized A. prostrata, and finally the thicker A. spathulatha. All of them have very close similar scale like radial coralites that are often linked together in chain pattern.

A. spathulata were side attached while A. millepora were centered attached.
We found some weird looking millies, some having some few tips filled with new growing axial corallites.

But the most interesting thing we found is a red A. millepora colony, having some green fluorescent protein in 4-5 tips over few hundreds of the total colony. A bit like the rainbow splice millie from Reef Raft. We took some tips and put them to grow, will see what it does.

We also noticed that some millepora that were stressed by constant rubbing of sargassum algae were actually developing some blue tips.

Apart from the duo combo, of millies associated, we found quite a few A. rosaria cherry blossom, some had green base, red branches with blue tips, were absolutely gorgeous, the table plate red planet A. hyacinthus and A. cytherea (Which was the only species always harboring acro eating flatworm in this location).

The full range of branching acros, like A. Formosa, A. copiosa, A. exquisita… This long shallow dive, was one, that seats high on the list of the few best dives we ever done! Welcome to milliland!