The Neptune Systems Trident is an ambitious new product finally released this week to great fanfare and anticipation. Neptune Systems has a history of aiming for grandiose visions of fully automated reef tanks, and the Trident is the culmination of years of product testing and development coming together to create a device unlike anything seen before in the aquarium world.

As previously mentioned, on its own the Neptune Systems Trident is a gorgeous paperweight, but when paired with an Apex controller it can completely monitor your aquarium chemistry beyond pH, ORP, Temperature & salinity. Calcium, Carbonate and Magnesium are all rapidly taken up by fast growing corals, but no matter the tank this consumption rate is very dynamic and requires diligent management, which up until recently has only been possible with manual titration testing.

The first factor that the Neptune Systems Trident has in its favor is that it tests the ‘big three’ the same way that we do, using colorimetry to accurately determine the concentration of Calcium, Alkalinity and Magnesium. We never questioned this technical aspect of the Trident but still had doubts about everything else required to keep this magic reef chemistry machine in peak working order. 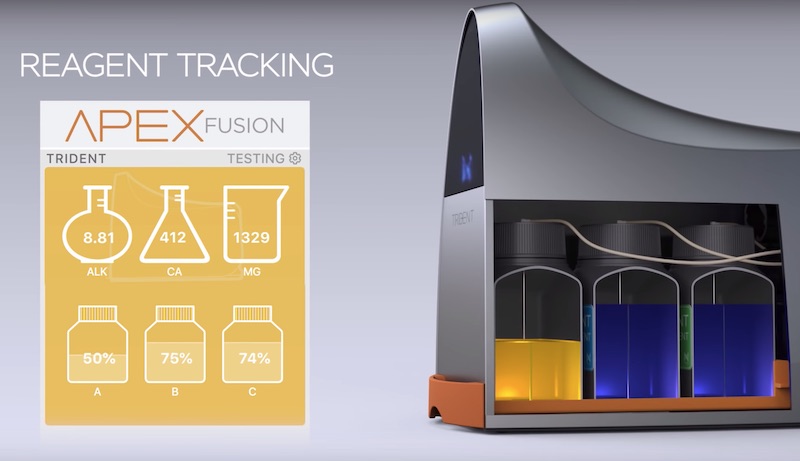 Now that the Trident has been fully unveiled, it’s clear that Neptune Systems has leveraged decades of experience to create a complete and streamlined user experience with the Trident. By this we mean all the volume monitoring of the reagents, the waste container, the additives, number of tests remaining and have it all displayed in an informative and intuitive dashboard. 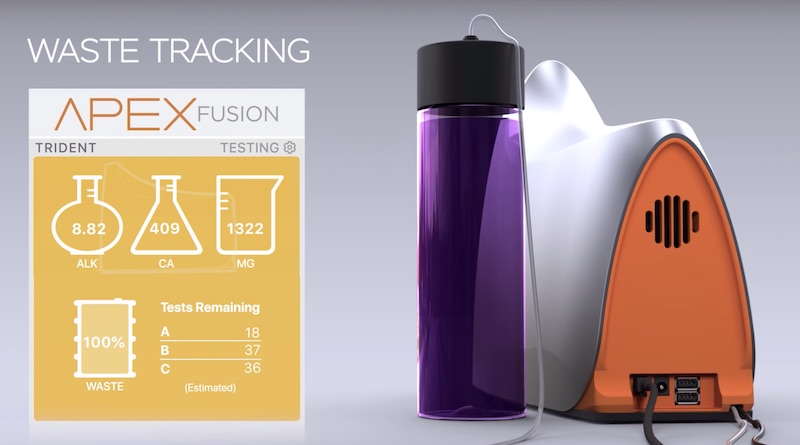 One lingering question we had when the Neptune Systems Trident was initially announced was very much to do with the reagents, how many tests you’d get and for how much. Would it costs $100 for proprietary reagents to test each of the values once a day? We are pleasantly surprised that Neptune Systems has really hit a killer value proposition at an estimated 9 cents per test, with ‘two months’ worth of reagents selling for just $44.99. 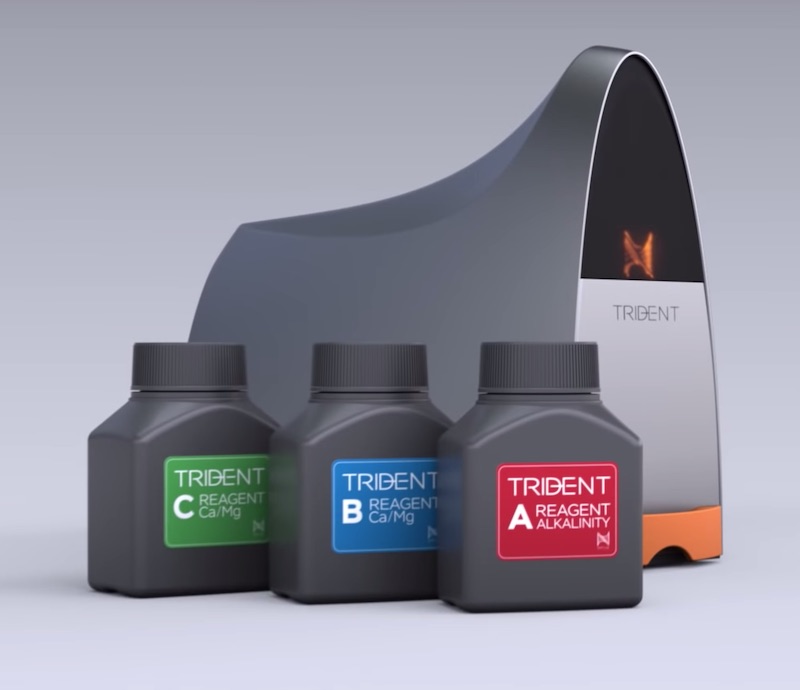 Two months of reagents for the Neptune Systems Trident includes 120 tests each of calcium and magnesium and 240 tests of alkalinity. This amounts to two daily tests of calcium and four daily tests of alkalinity so you could easily stretch this out to four months if you halved the frequency of tests. Most manual testing is done on a weekly basis and at this pace the $45 of reagents for the Neptune Systems Trident could (theoretically) be stretched out for two years if simple monitoring is what you’re aiming for. 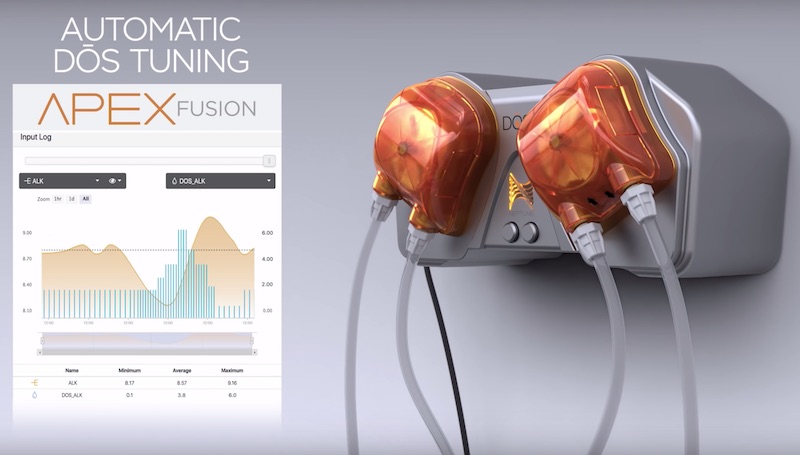 However if you’re a self described ‘control freak’ you’ll also be using the Neptune Systems DOS dual channel doser to automatically restore the levels of Calcium, Carbonate and Magnesium. A complete ‘cruise control’ reef tank using the fully fledged Apex ($799), Trident ($599) and two DOS units ($299 each) can run as just a few bucks short of two thousand dollars.

However you could also get by with using the Apex Entry Level ($499), a Trident ($599) and a single DOS unit ($299) to add just calcium and buffer, because magnesium is not nearly as critical or variable, and easily managed in other ways, for a grand total of $1400. That being said, Neptune Systems has a respectable user base of Apex users who will be the first reefers to buy into this future of automated chemistry. 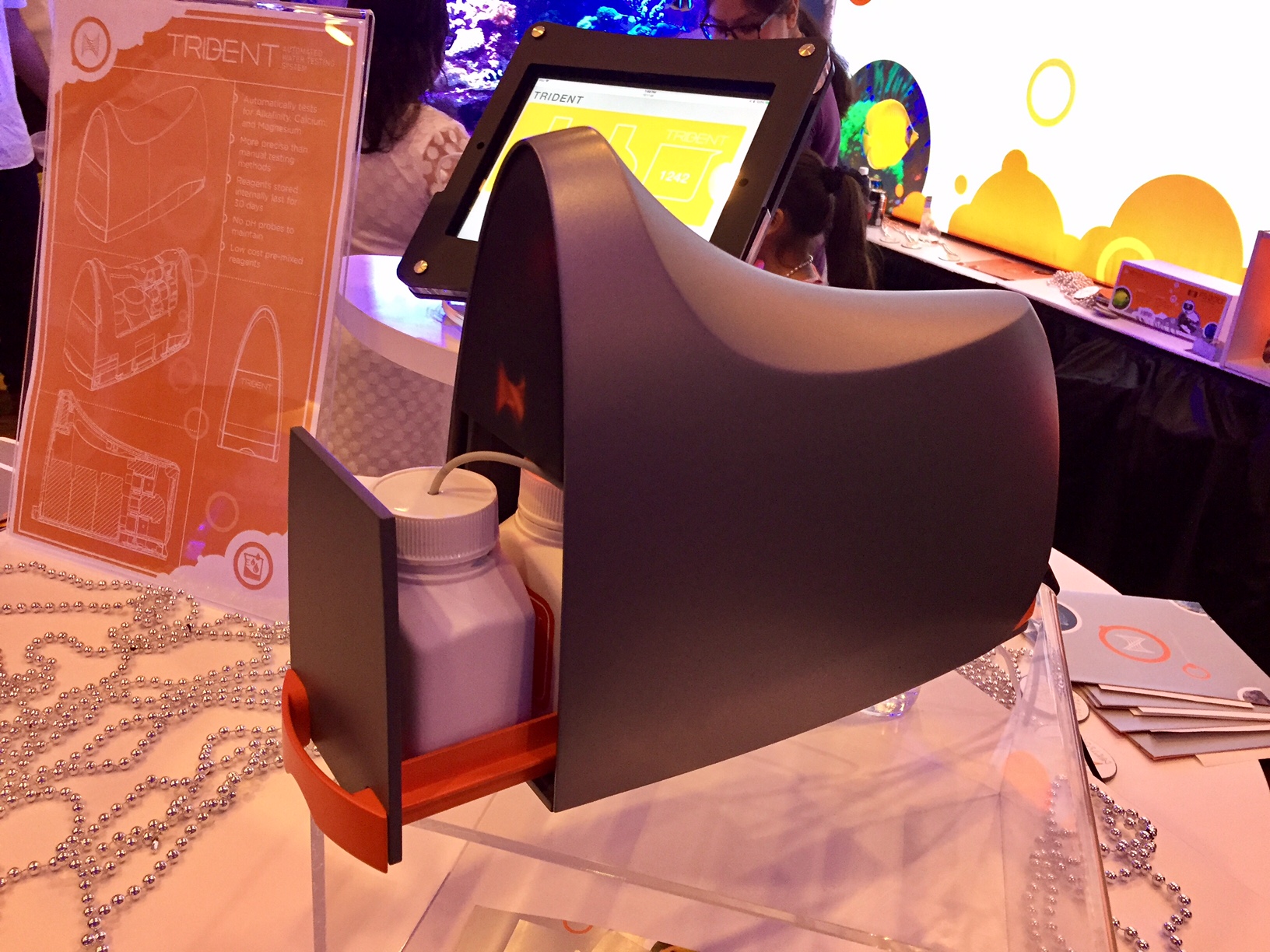 On its own the Trident has a lot of moving parts, any one of which could render the device inoperable if they fail, not to mention all the other parts of the Apex and DOS hardware and software that also have to work. We’ve been pretty critical of aquarium controllers in general, over the years because we’ve seen way too many reef tanks owners who were more proud of the gadgets, gizmos and whirligigs than their resulting reef display.

That doesn’t change the fact that Neptune Systems is breaking new ground with the Trident and we really want to see this device and others like it succeed in the reef aquarium hobby. The convergence of technologies required to make the testing of the Trident, Dosing of the DOS, and the brains of the Apex to bring it altogether can only get better, cheaper and more refined with time and experience – we sincerely hope this is a sign of things to come in the future of reef aquarium keeping. [Neptune Systems]

This is What Healthy Quarantined & Conditioned Fish Look Like [Video]

May 9, 2019
Site Sponsors
Reef Builders is Supported by: