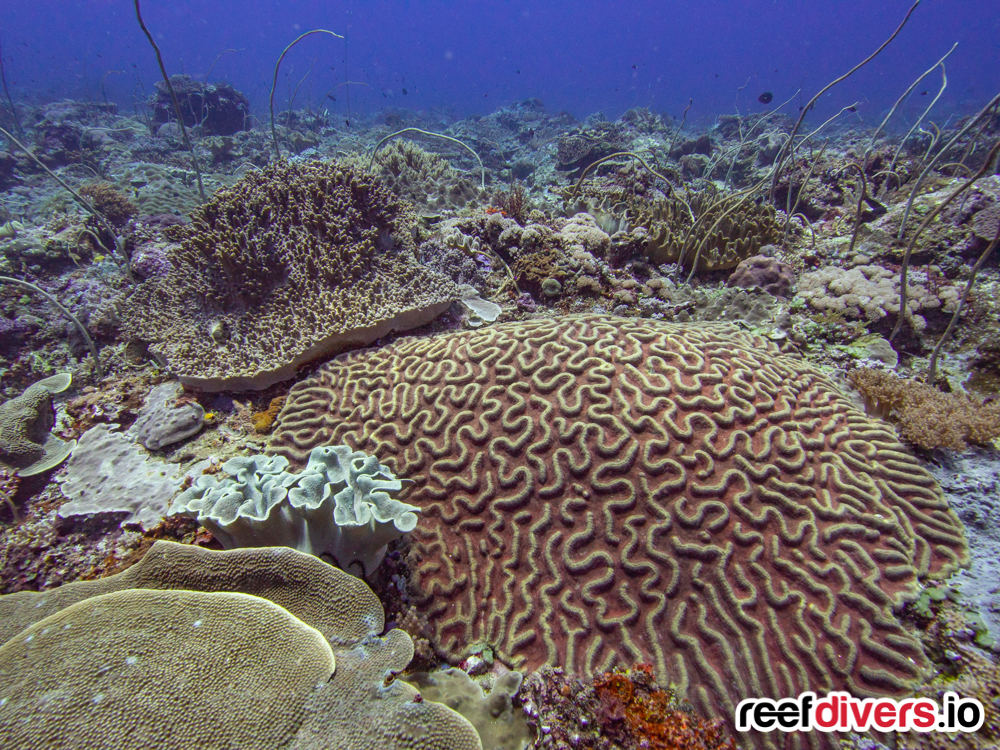 When you are looking at meandering corals you can learn two new terms about coral biology, ridges, and valleys. These terms describe the features of the meandering pattern and can help with more advanced coral identification. For example, when trying to identify between two similar species you might have to measure the distance between ridges or the depths of the valley.

Here are four meandering brain corals you can identify on your next indo-pacific dive.

Symphyllia is a colorful species that makes a dome or plate shape. This is a very common coral and you are almost certain to see one on every dive in the indo-pacific.

Symphyllia grows in a range of colors, however, typically you find this coral in red, yellow, and grey. Often the polyp mouths which are located in the center of the valley are a different color than the coral tissue. Symphyllia has a thick skeleton and puffy tissue. One characteristic of this coral is having one solid skeleton.
But wait there is something we need to throw in here. Back in 2016 all Symphyllia corals have been reclassified as Lobophyllia. This may be confusing as older guide books including Corals of the World still have them as Symphyllia. Nevertheless, if you’re interested in this technical detail here is the taxonomy revision article.
To keep things simple we will carry on with the older description of this coral as Symphyllia since this is what you will find in most guide books and older descriptions.
Symphyllia agaricia, Symphyllia hassi, Symphyllia radians, Symphyllia recta, Symphyllia valenciennesi

You might notice the similarities between Lobophyllia and Symphyllia, and see why they have now all been classified as Lobos. Lobophyllia corals form thick tissue and large lobes each one looking like it’s own little brain!
Each lobe can have a few polyp mouths depending on size and has one stalk which connects at the base of the coral. At night the lobes open and you can see all the tentacles coming out to feed. This is a slow-growing coral that can create huge colonies. You can find this coral in the shallowest parts of the reef. The lobes can be more than 15 cm or 6inches wide. 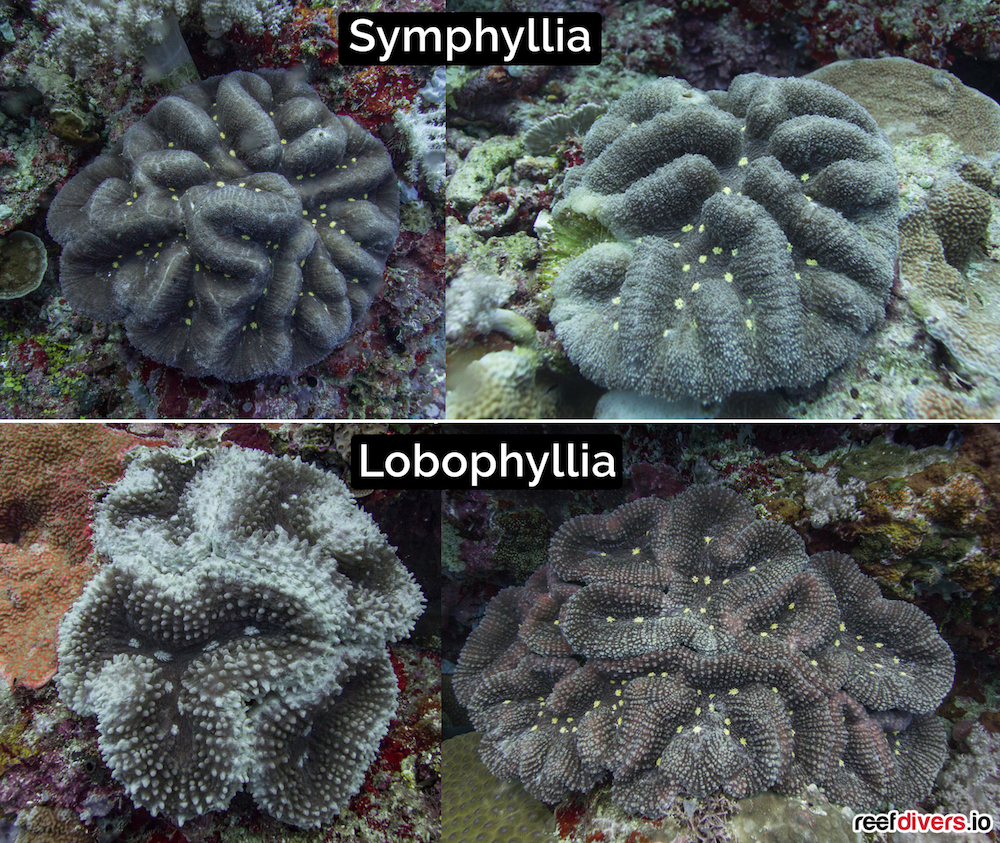 Platygyra is a common meandering coral that has short compact ridges. Depending on the species the ridges and valleys can be long and continuous of intersect to make little sections. These corals have tightly spaced valleys often less than 1cm wide.

If you look between the ridges you can see the polyp mouths in the center of the valley. There are several species of Platygyra, however, for the most part, the ridges have raised skeleton between corallites giving them a ragged appearance.
These corals can be tricky at first to identify because after being a meandering growth form they can also be plates, domes, or partially encrusting. The key to look out for is the tight winding valleys.
Platygyra contorta, Platygyra daedalea, Platygyra sinensis,

Oulophyllia is an uncommon coral with only a handful of species in the genus and only two that make the meandering type. The color is usually a grey, to light green with distinct oral discs. The colonies make dome shapes and have short broad valleys around 2mm wide and walls short uniformed size walls. This is an uncommon coral found mostly in lagoons. We found these two in less than 4m of water.

Snow Storm Clownfish have a Dash of Blue!