When visiting Bangka island, you don’t have to go far to experience world-class coral snorkeling. The coral reef behind Murex Bangka Resort has an impressive diversity of marine life which is easy to spot for all snorkeling skill levels.
Shallow colonies of branching corals, teeming with tropical fish and colorful soft corals of all shapes and sizes. You can spend hours snorkeling the reef on a treasure hunt of coral diversity! And we did just that 🙂
Here we put together a mini-guide of some of the most common corals you can spot while snorkeling the Murex back reef, as well as some unique colonies more advanced corals spotters can find. 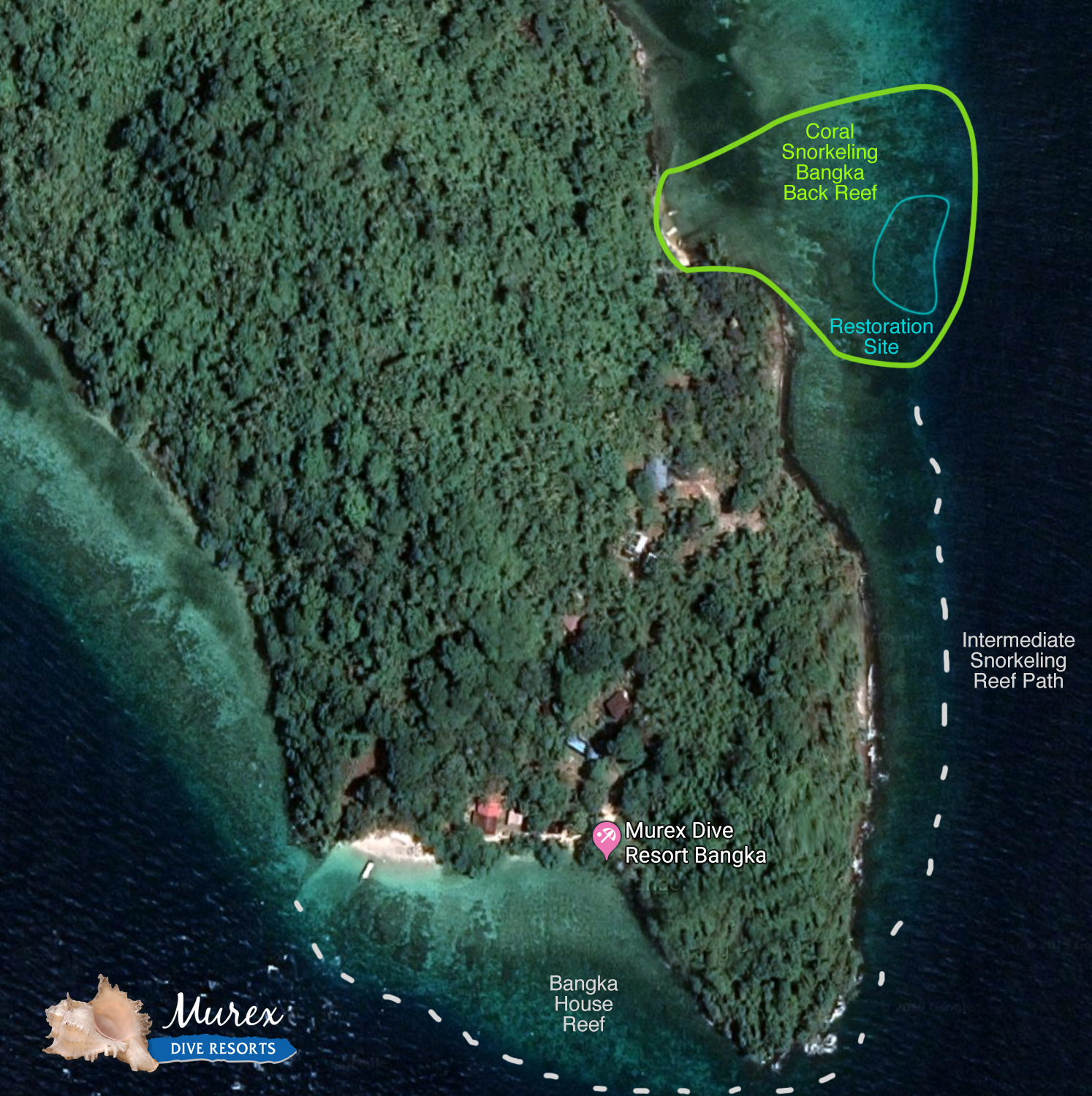 To get to this particular snorkel spot, swim out from the back of Murex Bangka. There is a small landing beach at the back of the resort. Swim straight out from the beach. Depending on the tides you may have to walk a dozen meters through the seagrass until the water is deep enough to swim. 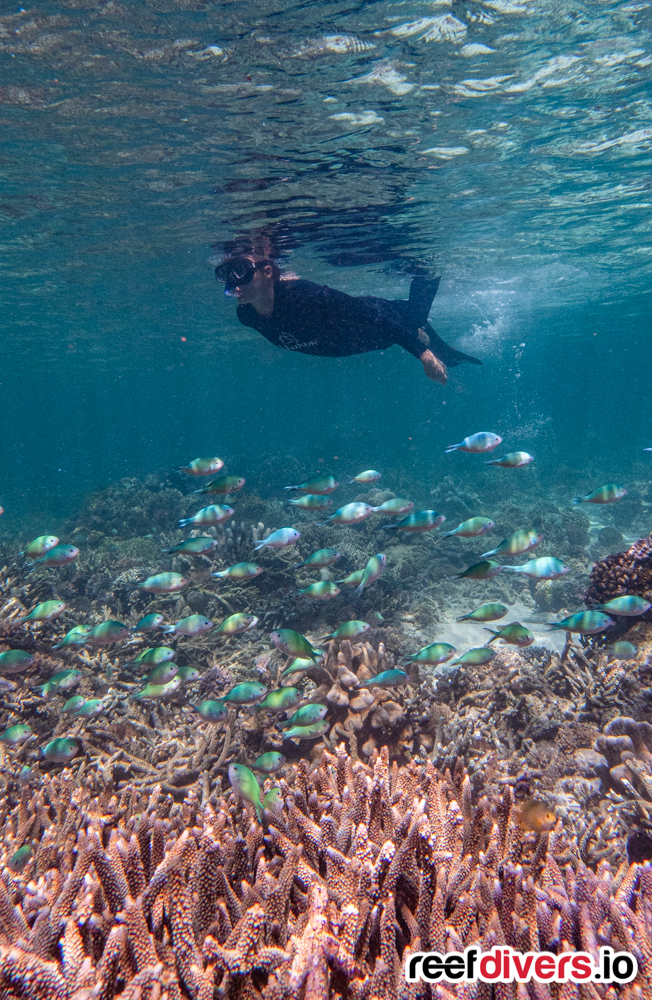 From there keep swimming until the reef starts to appear. The first thing you will find is hardy Porites boulders and then large colonies of staghorn shaped Acropora. The depth of these colonies is between 1-3m depending on tides so make sure not to swim to close over the reef top at low tide!
There are lots of brilliant blue-green Chromis fish swimming around in schools hiding amongst the branching and gliding between the large colonies.
You will find several different large Acropora colonies are the first corals you see during this snorkel tour. The branches nearly break the surface at low tide so it is important to have good buoyancy skills for this spot. 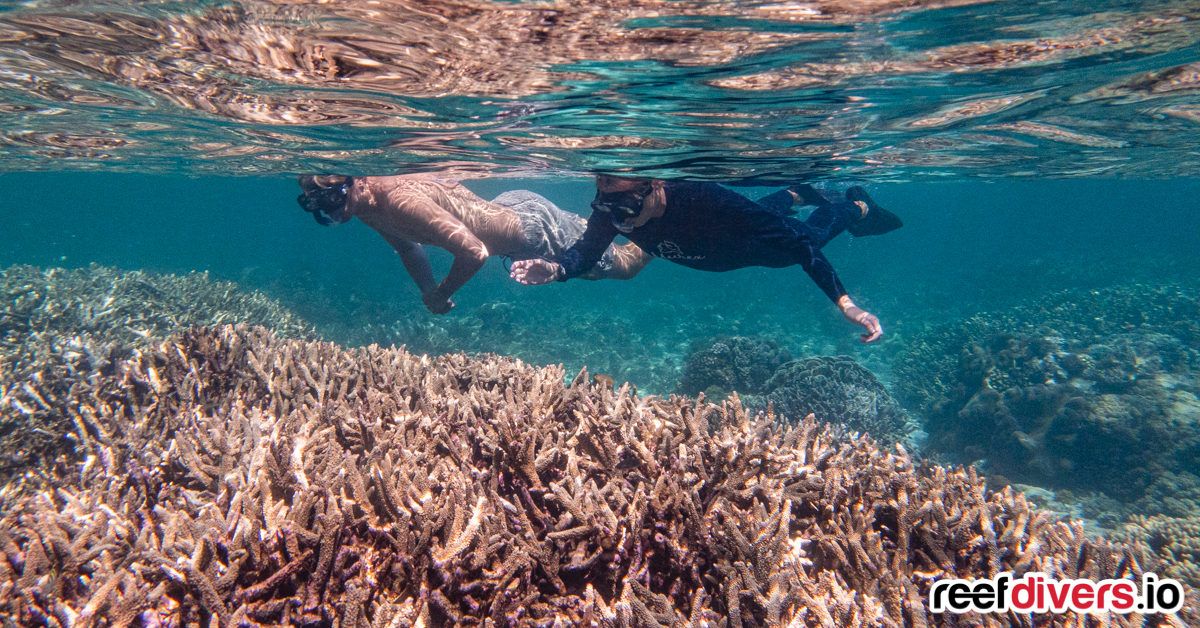 Once at the reef you can practice your first coral spotting skill, how to tell the difference between hard and soft corals. Here’s a quick overview, but if you want the full details check out this article.

See also  World Reef Conference 2009 in Chicago
It may seem simple enough, one is soft and one is hard, but can you really spot the difference between these two distinct groups of coral?

The biggest difference, as the name implies, is that hard-coral polyps form hard, calcium carbonate skeletons. Soft corals, on the other hand, are held together by a jelly-like mesoglea and rigid, spiny structures called sclerites hold together soft coral polyps.

To tell the two apart count the number of tentacles! Soft corals always have 8 tentacles. If you can count eight you’ve found yourself a softie.

The Bangka back reef has two beautiful types of leather coral, Sarcophyton and Lobophytum. You can tell the two apart by looking at the texture of the coral surface.
Look closely and you can see that Lobophytum has fingers or lobes that grow out of the coral, while the surface of the Sarcophyton is smooth and has folded edges.
These soft corals can be yellow, brown, green, and even purple, and Bangka is an exceptional spot for spotting many different varieties. The polyps of these corals are often extended during the day giving them a warm fuzzy appearance.

Once you’ve spotted some soft corals you can look for some pretty pink Pocillopora hard corals. You can recognize these corals by the knobby bumpy corallites which cover the branches, and also by it’s bright pink or purple corals.
And for a bonus, while snorkeling the back reef we found a unique green Pocillopora species with wide flat paddle branches. These branches are larger and more spread apart than the common pink Pocillopora species.
Pocillopora colonies are quite small like little heads of cauliflower which is where they get the common name cauliflower corals.

On the Bangka back reef, you will notice a talk thick branch corals with a similar bumpy texture. This coral is called Isopora and it’s big strong shape helps protect coastlines from wave energy. Don’t be alarmed by the pale colors. These corals are often pale cream color or brown, but there are some beautiful green colonies scatters in the shallow.
Someone recently explained these corals as a dog bone shape and I think it’s quite fitting! You will find lots of Isopora corals after you pass the shallower reef heading further toward the reef slope. Behind the Isopora (1-3m shallow side) you have the delicate corals before followed by Isopora (3m) and then larger boulder and plating corals on the slope (4-7m deep). 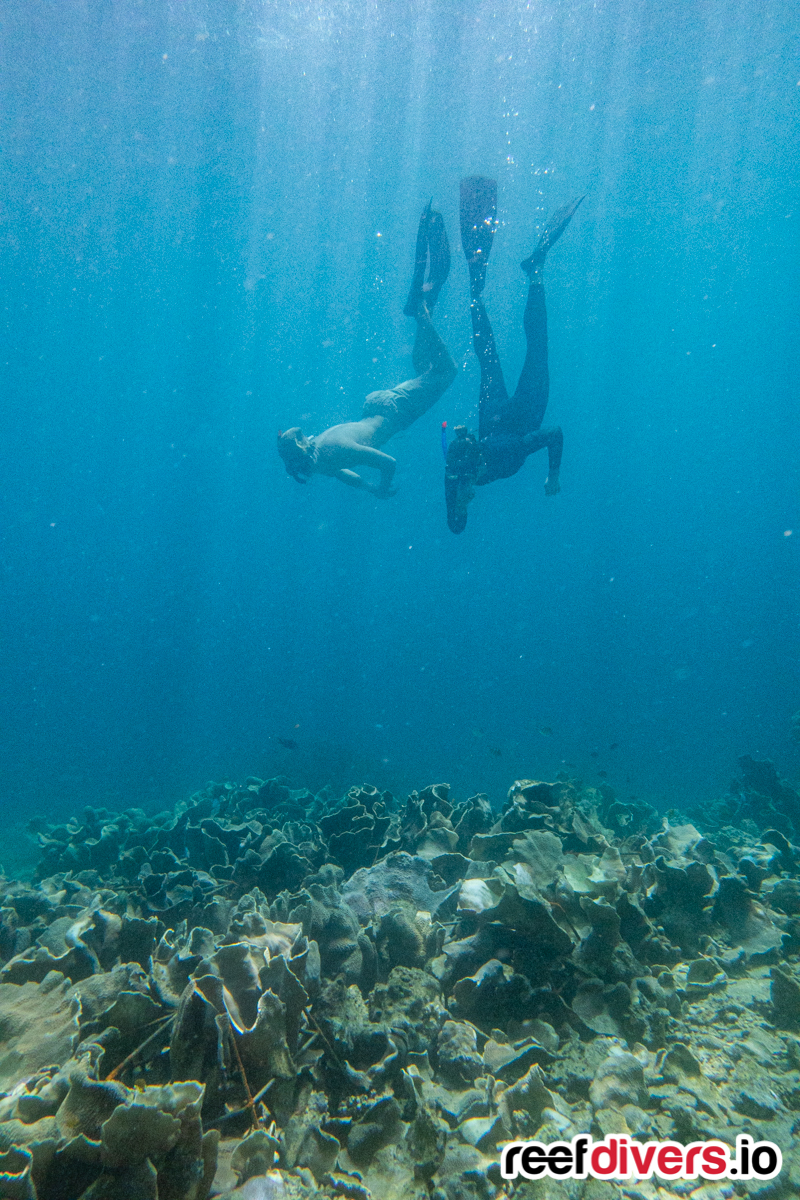 Last but not least one of the special parts of snorkeling this reef is the Turbinaria restoration site as you reach the reef slope. Located between 4-6m deep depending on tides, directly out from the Banga Back beach and at the bottom of a line marked by a silver recycled oil bottle buoy is an ongoing coral restoration site.
Turbinaria is a thick plating coral and this reef area had been broken apart by storms and fishing nets. Over the past four months, Murex has been preparing a 60m long restoration area, 10 of which is a large Tubinaria reef.
When the full reef is intact, coral colonies support each other. Even if one colony breaks the rest of the corals can provide support so the entier barrier doesn’t collapse. But when the barrier structure is damaged, the heavy colonies break under their own weight and wave action continues to break down the structure.


To restore the function of this barrier reef, over 150 large colonies were placed in a solid structure to reestablished their supportive neighborhood. This was done by linking together 16 metal rebar spiders and plating the large plates together in the spider grid. Over 100 smaller fragments, were also cemented onto solid bases on the far edge behind this barrier in an effort to prevent further erosion of this sandy plateau.
Behind the barrier, we established delicate branching Acropora corals and a cluster of hardy Stylophora and Pocilopora. On the slope in front of the barrier are attached strong corals to fortify the ridge including boulder Porites, sturdy branching Montipora and colonies of thick branching Isopora palifera.

You will find over 10 species of coral in this restoration site which Murex is growing in the Ocean Gardener coral nursery near Bangka resort.
Don’t miss out on coral snorkeling the Bangka back reef! Make it a quick hour-long trip or spend even more time exploring the shallow reef, weaving in and out of the coral bommies and checking out the ongoing restoration project.
For intermediate snorkelers, you can even swim past the reef and round the front corner of the island ending up right on the front beach of the resort. Always make sure to let someone know your plans if your snorkeling without a guide. And have fun 🙂