The ‘Bean Bag Yuma’ is an interesting color morph of the popular Ricordea yuma which is somehow familiar in coloration, but wildly different in its appearance. Ever since the stratospheric rise of shrooms, spearheaded by the iconic WWC Bounce Shroom, the global reefing community has had a keen eye for any interesting Discosoma, Rhodactis or Ricordeas.

This newfound fascination with corallimorphs has led to some incredible discoveries including the rainbow Ricordeas, insane Jawbreakers, and the Hallelujah Bounce, and the new Bean Bag Yuma is just the latest to grab our collective attention. What’s really fun about this Ricordea is that it’s kind of a sleeper ‘morph strain in that the small polyps looks kind of normal, while the large adult polyps are just out of this world.

Unless you’re from Australia, you’ll know that showy orange to pink Pacific Ricordea yuma are relatively common, once widely available from Indonesia, but still sporadically available from Vietnam. Thankfully, when well-fed and settled into aquarium life, Ricordea yuma can propagate much faster than other shrooms, certainly faster than Caribbean ricordea and jawbreakers, but nothing compares to the reproductie rate of ‘normal’ Discosoma. 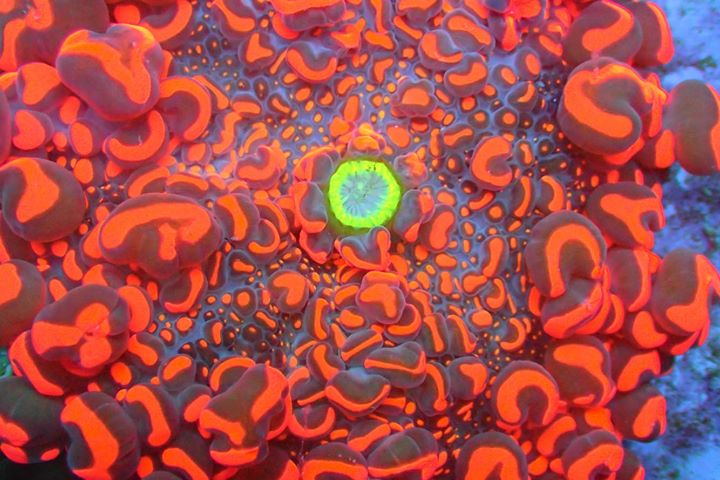 What makes the new Bean Bag Yuma introduced by Reef Raft Canada, and simultaneously promoted by Georgina Clark, is that the normally solid colored bubbly pseudotentacles are instead striped in an erratic pattern. A single red-orange stripe or squiggle is present on each round vesicle, imparting something of a psychedelic appearance to the Bean Bag Yuma.

Further adding to the mystery of the Bean bag Yuma is that the small young polyps have none of the squiggly pattern of the parent polyp, so they look essentially identical to a common orange Yuma. This could prove somewhat problematic for resellers of this strain who will be expected to display the parent polyp so there’s a modicum of credibility that the normal looking small Ricordea are actually the same strain. 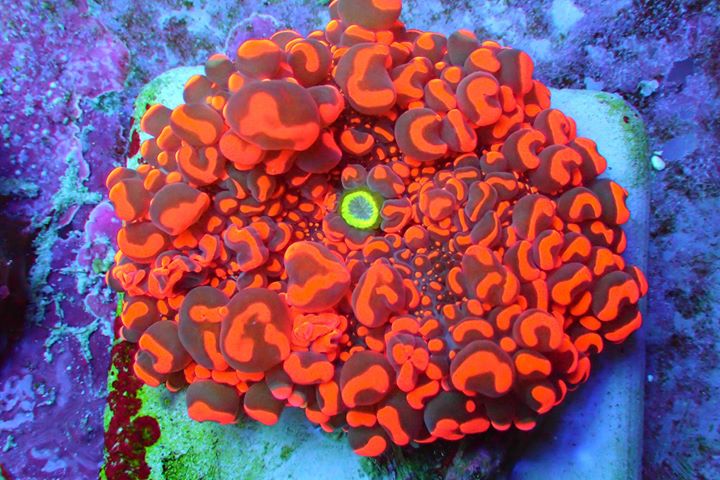 The flip side of the Bean Bag Yuma pattern or coloration starting out as a normal looking yuma polyps might encourage some Shroom collectors to snap up random loose yumas on new rocks from Vietnam. The first known strain of the wildly colored Bean Bag Yuma varies from orange to red but just like the Bounce Rhodactis before it, it’s probably a matter of time until this phenomenal appearance is discovered in other colors of Ricordea yuma.