The Blue Phantom Angelfish is a new domestically captive bred hybrid from Poma Labs which has an insane amount of potential as an exciting new aquarium fish. Resulting from the cross between a blue line angelfish, Chaetodontoplus septentrionalis, and the Black Phantom angelfish, Chaetodontoplus sp., a distinctive and very dark Poma angel recently fished up from remote parts of Philippines by RVS Fishworld.

Both parents of the Blue Phantom Angelfish are very beautiful and striking fish in their own right and we love the ‘lottery’ of discovering what these fish will grow into. What we mean by lottery is that, as far as we know, bluelines and black phantoms have never met in the wild so their hybrid offspring have a huge range of color and pattern they could develop.

The blueline angelfish is a well known, colorful and eye-catching fish. Meanwhile the black phantom angelfish is already an awesome and personable species with a gorgeous blue-scribbled, yellow face. 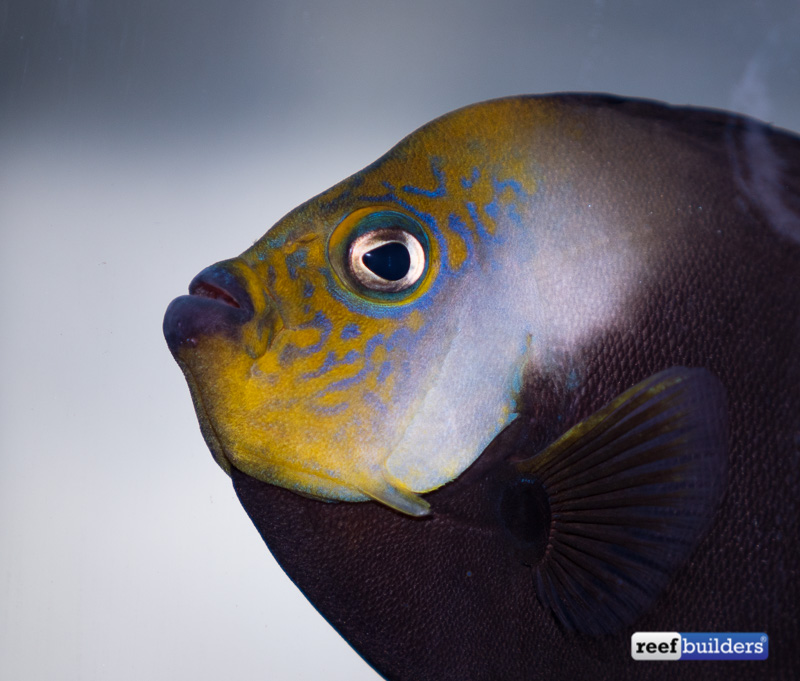 If you just take that baseline appearance and add more blue to the face and the body, at this point in their development, imagination is the only limit to what the new Blue Phantoms from Poma Labs will become. We are really excited to see this new captive breeding success in the Blue Phantoms because the excitement of hybrid Chaetodontoplus angelfish and the variety of appearances they can display is astounding.

Because the Blue Phantoms were raised alongside black phantoms and normal blueline angelfish it’s hard for Poma Labs to be certain how many Blue Phantoms are in the mix; their best estimate is in the dozens of specimens. So if you have any feels for the Blue Phantom angels, like the Blueline X Conspic there’s no guarantee they will ever be available again, so get them while you can. [Poma Labs]