We’re not sure what it is about the rabbitfish but we’ve always had a soft spot for these common and hardy aquarium fish in our aquariums. Their unique shape, docile behavior, and friendly personality has always endeared them to earn a place in our own tanks, and especially their tendency to eat algae like a machine has made them a useful fish to have.

Besides the foxface subgroup of the only genus, Siganus, rabbitfish are woefully underrepresented in aquariums for as common and widespread as they are in the wild. This is really quite a shame because they are quite cheap, can truly benefit the reef aquarium and since Biota Palau began culturing them there’s been a steady supply of young, small specimens ready to pull their weight and be great aquarium fish. 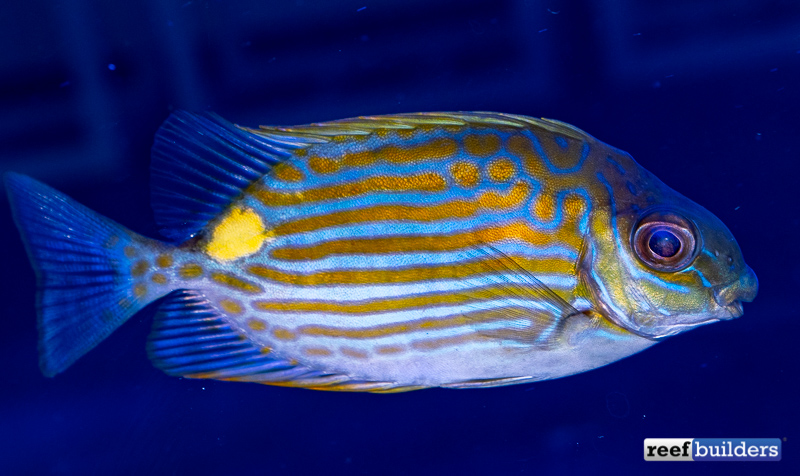 For about a year Biota has been offering the lined rabbitfish, Siganus lineatus as small cultured specimens which are ideal for a wide range of marine aquariums.

Tenacious Algae Eaters – If you thought that surgeonfish are good algae eaters, you haven’t seen REAL algae munching until you’ve seen a rabbitfish go to town on your unwanted algaes. They won’t eat every single type of algae or Valonia, but even more so than foxfaces rabbitfish can make such short work of filamentous and turf algaes that you quickly have to offer them something new to eat! We rely on Biota’s gold line rabbitfish to help keep our coral flats and reef tanks more algae-free than an army of cleanup crew invertebrates. 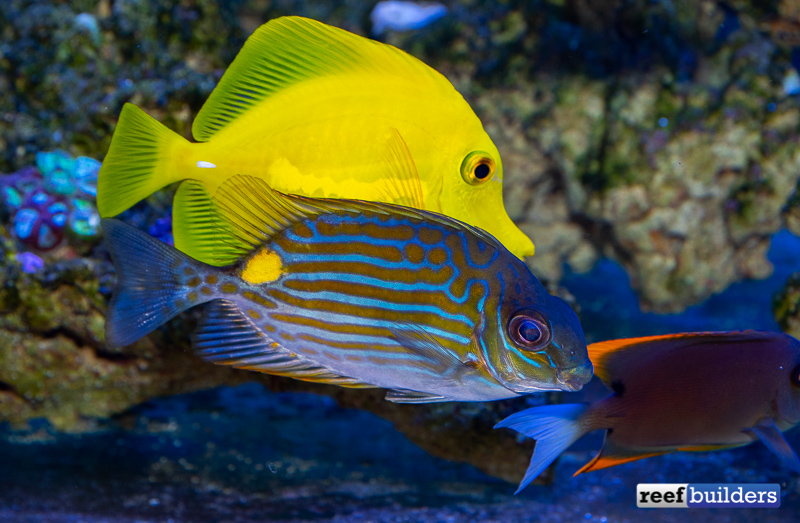 Very Docile & Peaceful – It’s widely known and common knowledge that it can be tricky keeping multiple surgeonfish together in the same tank. This really depends on the surgeonfish species, the order in which they are added to the tank and which species tend to be more belligerent than others. This is totally not the case with rabbitfish which are very social reef fish, schooling together in huge groups and they are simply not programmed to be aggressive or territorial. They are also ‘neutral’ in the social pecking order of other marine fish since most surgeonfish don’t really give them any friction either.

Unique Colors and Patterns – Rabbitfish are totally the ugly ducklings of reef fish, starting life as small colorless silver fish you can hardly identify. But as they grow, rabbitfish including the cultured gold lined rabbits from Biota develop a network of metallic lines on the body and spots on the tail that turn blue as they mature while other parts become greenish to golden in color. Once they reach adult size rabbitfish are full-on showstoppers of color and pattern to rival just about any surgeonfish, this includes the Biota lined rabbitfish. 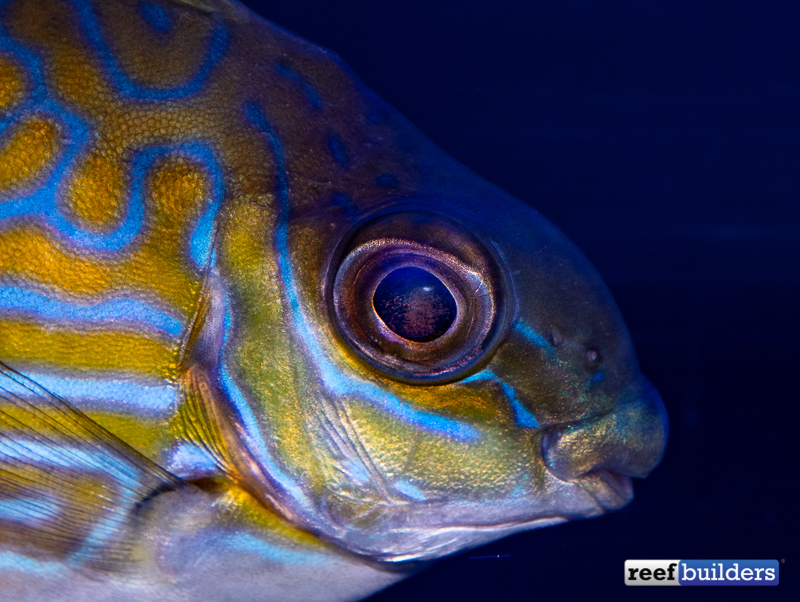 Neat Eye Colors – This won’t make or break the rabbitfishes’ popularity index but Siganus rabbits have a neat opalescent color and quality to the eyes. This feature is not dissimilar to pufferfish and becomes more noticeable with age and size but it really looks like rabbitfish have eyes made out of opal.

Very Hardy – Rabbitfish and foxfaces are very hardy fish that are often the oldest fish in many new aquarist’s first saltwater aquariums. In nature, juveniles often grow up in coastal estuaries and brackish water so they are naturally inclined to tolerate wide fluctuations in water quality. Furthermore, rabbitfish are an important source of protein in many tropical coastal communities so it was also one of the first saltwater food fish to be successfully cultured, again due to their forgiving environmental preferences.

The only thing holding back some of the rabbitfish species is their large adult size, and how much they need to be fed to satisfy their prodigious appetites. You wouldn’t want to put a rabbitfish in a nano or even a small aquarium (not for long anyway) but they can fit in well in medium to large size aquariums. Much like freshwater fish that start out drab and need to be grown and conditioned to maturity, adult rabbitfish are stunning saltwater fish that start out totally bland. If you can forgive their ugly duckling phase, rabbitfish are excellent aquarium fish that can put a serious dent in any aquarium’s algae growth.

This Colorific Hammer Coral has a Trick up its Tentacles