Simon’s Nature Preserve is an Ark of Coral Diversity [Video]

Around this time last year we shared with you some tantalizing stories from the Solomon Islands about forests of soft corals, feeding wild corals and restarting coral farming efforts where they began in Marau Sound. But in traditional Reef Builders fashion, we held onto the best story and footage, and at long last have spent nearly a year producing one of our most immersive reef diving videos to date.

Last summer we teased a little bit about an incredible reef location called Simon’s Nature Preserve which is one person’s quest to rehabilitate the reef zone in front of his village. Protecting and preserving this place began by designating it as a Marine Protected Area where fishing is not permitted, and the entire place is cordoned off from any boats or pretty much any activity except diving and snorkeling. 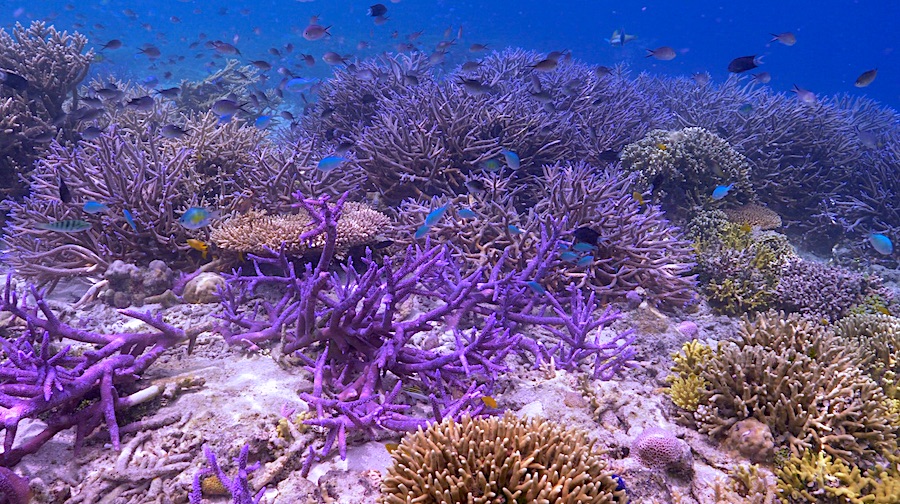 But Simon’s Reef is not just protected, it has also been curated by Simon himself by looking after the corals, making sure they are in the right places – in the shallows that he can easily reach. But perhaps the most exciting part is of this reef zone is how Simon has collected and transported various corals from other reefs and neighboring regions; imagine collecting your own corals and growing them in your own reef tank – now imagine doing the same thing but instead of planting the coral in your tank you planted them on your own reef!

The idea of having your own collection of wild corals sounds pretty awesome in theory, but as we can attest from visiting this place ourself the resulting living coral reef is even more incredible. Whereas on other reefs we’ve got a checklist of various species we’d like to check off once, at Simon’s Nature Preserve we’re listing off varieties and color strains of different species, such as the diversity we documented just within Acropora florida.

We spent hours diving and snorkeling this fantastical place and did everything in our power to condense as much of the journey as possible into one transportive, vicarious diving experience. We sincerely hope that this video will give viewers some sense of what it’s like to be in the Solomon Islands, diving a tropical environment surrounded by a living catalog of the most diverse corals in the world.

The Hazards of Catching Fish in a Euphyllia Tank

Animals On An Aquarium Tour