Experimenting With Color Mixing in Montipora

Montipora species are beloved reef aquarium corals for a number of reasons, their range of shapes, range of colors, and more recently for their surprising ability to acquire new colors/pigments into what the hobby calls ‘grafting’. This phenomenon is more accurately described as a form of infection by pigments from other corals, but the true nature of how Montipora, as well as other SPS corals, acquire new colors, is as of yet still undetermined.

The Green Splash Astreopora is alive and well in captivity

In the reef aquarium we most often see red Montipora acquire splashes of green pigments and in other cases it can also be green strains that acquire red pigment, but other colors can also be involved and it’s not exactly that rare in the wild where hundreds of different corals grow on the same reef. The phenomenon was made famous by several coral strains, the most common of which being the WWC red & green grafted cap, the Sunfire grafted cap, and most recently in the red & green Montipora digitata. 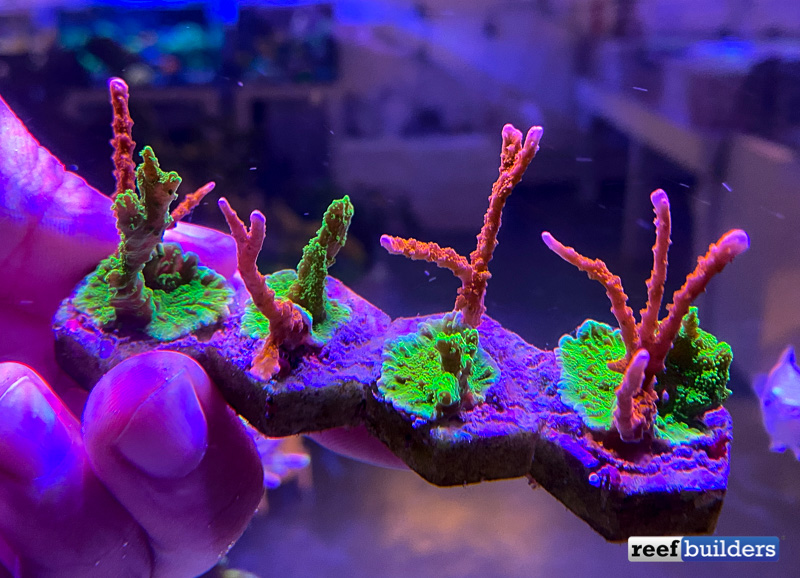 Around this time last year we collected a very bright neon green strain of Montipora stellata from the Great Barrier Reef in Australia and not long after, got our hands on a very bright red Montipora hirsuta analogous to one we came across in Dubai, UAE. Superficially these two differently colored Montipora species look very similar, but the green strain tends to encrust and plate out more, whereas the red version seems to prefer an upright branching growth form.

With these two different species being totally different colors, we decide to try a little experiment to see if we could induce or cause a transfer of pigment from one coral to the other. Hopefully we hope to succeed in getting a reciprocal exchange of the red and green pigment in both colors, resulting in a red & green strains of both Montipora stellata and M. hirsuta. 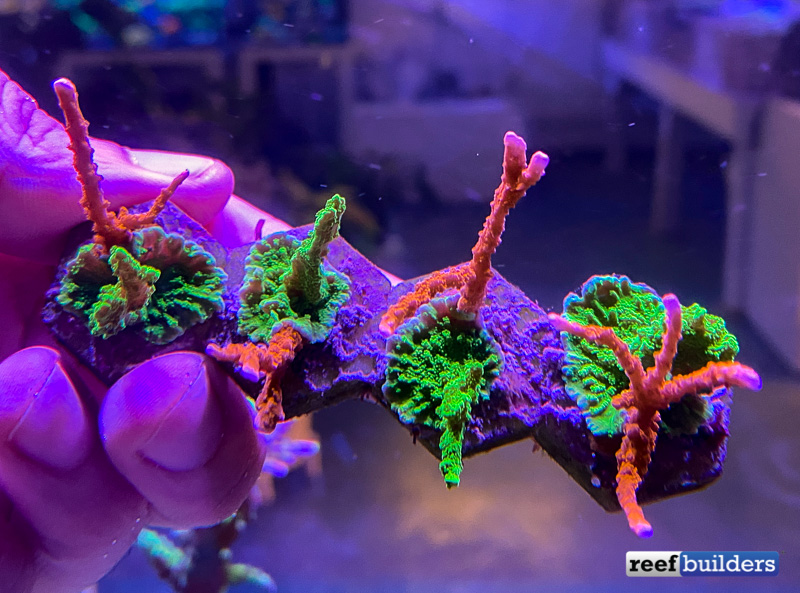 These experimental tiles were grown in relatively low light with an average PAR value of around 50 umol/m2/s and in this environment you can already see the distinction between both species. It’s been a few months so recently we pulled these different tiles apart for inspection, and to transfer them into several different tanks to see how they will continue to interact in higher light, higher flow, higher nutrients etc.

It is our hope that with several replicates and exposure to a diversity of physical parameters we will increase our chances for an exchange of pigment between the two corals. But at the very least we may be able to find a sweet spot to cultivate a mixed-species coral colony wherein the branches of both species grow at a similar rate, for a beautiful red & green branching Montipora that is truly unique.